TINLEY PARK, Ill. – I took my first trip Tuesday out to the Brookside Marketplace shopping center and it hit me while driving through the center’s enormous parking lots – I now have another “eerie address” to add to my life story.

For those of you living in a cave these past four days, the shopping center was the site of a mass shooting at a Lane Bryant store that resulted in five women killed, and a sixth injured and being kept in protective custody – just on the off chance that someone might want her “taken out” to eliminate a quintuple murder witness.

“Eerie addresses” are what I call sites of vicious crimes that are in areas connected to my life. They are places I have passed many dozens, if not hundreds, of times in my life. No physical evidence remains of what happened there. But in my mind, the crime is on an endless loop.

BROOKSIDE MARKETPLACE IS a still-under-construction shopping center in the southwest suburb that has grown so much in the past decade that it has spilled over from Cook into Will county, including the mall.

Cook County Sheriff Tom Dart probably breathed a sigh of relief that this crime did not happen on his territory. Literally, though, had it happened on the east side of Harlem Avenue, or just to the north of the shopping center, it would have been a Cook County crime. 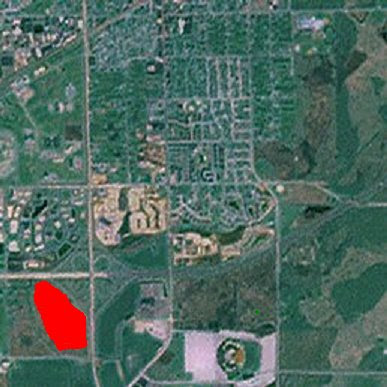 This aerial shot shows the proximity of the Brookside Marketplace (the red mark) to Interstate 80 and Harlem Avenue. The suspected gunman -- who remained at-large late Tuesday -- likely had no problem quickly escaping the Chicago area and spending Saturday night in Toledo, Ohio or Des Moines, Iowa, or anywhere else in the United States. Illustration provided by Yahoo Maps.

How does this affect me?

My mother lives in Tinley Park, just off of Harlem. She is exactly 20 blocks from the shopping center, and there have been times that I have taken her shopping there because it is only a five-minute drive (at most) from where she lives. There also have been times when my brother and I did Christmas shopping there.

I HAVE NEVER been in the particular Lane Bryant store where the Saturday shootings took place. But I knew exactly where it was, sitting all by its lonesome on the east edge of the shopping center. Most of the big stores, such as a Super Target and a newly-opened Kohl’s Department Store are on the west end.

In fact, I was physically in Tinley Park on Saturday at the time the shooting took place. I was spending time with my mother when I learned of the incident, and I saw some of the paranoia that overtook local residents.

A police officer literally parked his car at the west end of my mother’s block (the point where her street intersected with Harlem Avenue) and was giving a cursory check to everybody who tried to drive down the street.

I didn’t get harassed too much (maybe I just had an innocent look about me that day). But I heard the helicopters repeatedly flying overhead, as local officials were hopeful they might see something from above that would tip them off to the gunmen.

SHOPPING THERE WAS already a strange experience because the center (which has repeatedly been referred to in news coverage as a strip mall, but is way larger than the usual convenience and video store combinations that usually comprise mini-malls) is still under construction.

The Target has been up and running for about two years, but the Kohls and a Best Buy opened just a few months ago, and some stores are still being built.

Instead of being able to look forward to the day when the store is a fully-mature shopping experience, Brookside Marketplace will now always have an aura of creepiness to it, unless the mall’s owners are willing to adopt a go-with-the-flow attitude and allow the true-crime gawkers to take over the place.

So the 19000 block of Harlem Avenue in Tinley Park goes into my “eerie address” book, along with the 2300 east block of 100th Street in Chicago, and the 300 block of Yates Avenue in Calumet City.

THE FORMER WAS the site of one of the most notorious (and attention-grabbing) crimes in Chicago history when, in 1966, a merchant marine from Dallas named Richard Speck broke into a townhouse where nine student nurses at nearby South Chicago Community Hospital were living.

Eight of them were killed (one was brutally raped), and the only reason the ninth was able to survive was that she had the sense to hide under a bed. Speck, who apparently lost count of the women, left without doing anything to her.

Both sides of my family come from the South Chicago neighborhood. My parents were raised there and I was born there. I still have some relatives who live there.

There was once a time when going to grandma’s house meant driving along 100th street and passing “the Speck house.” It was a building whose sight I never will forget, along with the public park that was across the street.

I REMEMBER WHEN I first dug up the newspaper clippings about the crime as part of research for a school project (I was not quite one year old when the crime happened), what caught my attention was the note that police interviewed people in that park. In fact, had Cora Amurao not had the sense to hide under the bed, Speck likely would have gotten away with his crime – instead of spending the rest of his life in prison as the star of bootleg pornographic films.

Every time I drove by the eerie address after that, I could picture in my mind the police becoming extremely frustrated by their efforts because, “nobody saw nothin’.”

Even though the structure itself has since been torn down, I still know where it stood, and can picture it in my mind’s eye – even without driving east on 103rd street.

Then, there is Yates Avenue. I lived there when I was in high school, and my mother lived there for several more years before finally moving further away from Chicago proper.

I LIVED IN the middle of the block, and my mind can still picture the apartment building on the corner where on a late night in December 1987, the Calumet City police made Barney Fife look like a professional lawman.

On that night, a man who was seriously wasted on drugs (the kind that gave him way too much nervous energy, rather than put him to sleep) broke into an apartment unit, deciding he needed to have sexual contact with someone.

The woman who lived there ran out of the apartment screaming, and a neighbor called police. The woman’s 12-year-old daughter wound up suffering the brunt of the man’s sexual anger.

When police arrived, they had the mother telling them what was happening inside. They could hear screams from inside the building. Yet two rounds of police officers were hesitant to break in, out of fear they would be accused of over-reacting to the situation.

IT WASN’T UNTIL a third round of officers arrived at the scene that police entered the apartment, where they eventually had to use their clubs to beat the man off the girl.

I learned most of this detail two years later when the man was on trial in Cook County court in Markham. I was a reporter for the now-defunct City News Bureau of Chicago at the time, and I covered the trial for the wire service.

At the time, my mother still lived on Yates Avenue. It creeped me out more than any other story I ever wrote about (and I was a reporter walking the streets of Winnetka trying to get information the day in 1988 that Laurie Dann broke into an elementary school with a pistol and began shooting students and a teacher, before finally shooting herself) because of its proximity.

But I can’t say I’m going to be packing up my mother’s belongings and moving her away from Brookside Marketplace. One of the things I learned from being a reporter is that there really are no safe places.

PEOPLE LIKE TO think they can find a neighborhood in Chicago or community elsewhere that is so secluded that no one can ever reach out to hurt them. Such places do not exist.

Something even happened when I lived in Springfield, Ill. One of my neighbors in the apartment complex where I lived became so enraged when he learned his wife was planning a trip to Las Vegas with another man that he went and got his gun, then refused to let her go.

The “hostage situation” in my apartment lasted about four hours, and I had to stand around outside waiting for police to let me back into my unit.

BUT THE 700 block of Bruns lane in Springfield doesn’t count as an “eerie address” for me because there were some tawdry details that made the story more pathetic, than chilling. Plus, no one got shot.

The bottom line is that bad things can happen anywhere. They are not restricted to the Englewood neighborhood, or some other place where “bad” people live (‘bad’ in this instance meaning, ‘not like me’).

They even happen in “extremely ordinary and dull” places like the Chicago suburbs.

EDITOR’S NOTES: Focusing attention on Tinley Park in the search for a gunman like local police are doing (http://www.suntimes.com/news/metro/776717,CST-NWS-shoot05.article) could be a mistake. Brookside Marketplace is located on Harlem Avenue literally where the street intersects with Interstate 80.

Tinley Park Mayor Ed Zabrocki tries to calm the population (http://www.tinleypark.org/) of his village by telling them the obvious; evil can happen anywhere. But it is interesting to know that flags in the suburban village will remain at half-staff until Friday as a tribute to the dead.

For those of you who enjoy reading law enforcement attempts at writing in legalese, here (http://www.tinleyparkpolice.org/pdf/Lane%20Bryant%20update.pdf) is the latest update on the quintuple murders issued by the Tinley Park police department.
Posted by Gregory Tejeda at 12:00 AM