Chicago should embrace its Lincoln heritage

What does it say for the parochialism of Chicagoans that the official ceremonies commemorating the 200th anniversary of the birth of Illinois’ most significant resident ever are largely an afterthought in the Second City?

While communities all across the nation are planning events throughout the next 366 days leading up to the Bicentennial of the Sunday in 1809 that Abraham Lincoln was born in a log cabin in rural Kentucky near the current town of Hodgenville, there is nothing set for Chicago.

FOR THAT MATTER, there’s nothing scheduled to take place anywhere in Cook County.

Thus far, the closest that any official Lincoln celebrations will come to Chicago will be in Batavia – and both events are rather minor celebrations.

Those events are both scheduled for this weekend, and consist of little more than allowing people to meet, and talk with, a Lincoln impersonator on Saturday at the museum which displays a recreation of the sanitarium cell where Mary Todd Lincoln was committed for four months in 1875. There also will be a re-creation Sunday of the famed debates between Lincoln and Stephen A. Douglas at a nearby restaurant. 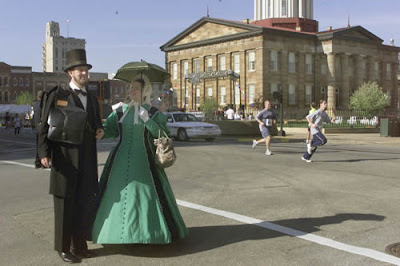 Actors portraying Abraham and Mary Todd Lincoln walk the downtown streets of Springfield, Ill., near the Old State Capitol. Lincoln actually walked these streets, as his law office was located across the street from the capitol and his home was two blocks south. Photograph provided by Illinois Bureau of Tourism.

The debate recreation is taking place there even though none of the seven real debates held during the 1858 race for a U.S. Senate seat were anywhere near the Kane County town located just under 40 miles from downtown Chicago. Freeport, located on just the other side of Rockford, is as close as Lincoln and Douglas ever came to the city that grew in Lincoln’s lifetime from a rural trading post to an Illinois city rivaling Springfield or Peoria (it’s rise to a world-renowned metropolis came following its resurrection from the Great Fire of 1871) in influence.

ADMITTEDLY, A MUSICAL show inspired by the life of Lincoln is under production. Tentatively entitled, “A Good Man,” it will be shown at the Ravinia Festival near Highland Park some time during 2009.

But that just isn’t enough, considering that Lincoln is the one president of the United States to date whose political style was developed in the nitty-gritty political world of Illinois. Barack Obama would be the second if he actually gets elected – I don’t count Ronald Reagan because he left Illinois after graduating college for a life in California.

There are no plans for anything in Chicago like the period ball held Saturday in Springfield, Ill., or the open houses scheduled for Tuesday at the recreated log cabins at Lincoln’s Kentucky birthplace and at New Salem (near Petersburg, Ill.) where Lincoln first lived as an adult in Illinois.

Similar events are scheduled throughout the year and into early next year in cities across the state, and in other Mid-western states. Some people are determined to pay tribute to the memory of Lincoln, whose efforts kept a nation together at a time when it was in danger of collapsing.

FOR THOSE PEOPLE who think the chasm between North and South is just a natural part of the United States’ composition, keep in mind that the regions may have their differences on many cultural and economic issues, but at no other time in this country’s history have Southern “rebels” seriously talked secession, not even during the 1990s.

Lincoln’s determination to keep the nation whole made possible the gains in the late 19th and 20th centuries that allowed the United States of America to become one of the top nations of the world.

For those “Southern sympathizers” of today who try to recast the Lincoln legacy into one of a hypocritical racist (he didn’t really believe in integration of the races, would have liked to have seen slaves repatriated to Africa and only turned the U.S. military effort during the Civil War into a fight for freedom to prevent other world nations from siding with the Confederacy), one needs to keep in mind that Lincoln’s view was the “liberal” viewpoint of that era.

He regarded African slaves as human beings, unlike his opposition who saw them as little more than livestock that could be trained to speak. And it was those same opposition forces who were willing to scrap the thought of being part of the United States of America when Lincoln was elected president in 1860, out of the mistaken belief that Lincoln’s first act would be to start freeing slaves (taking away their property, as they saw it).

THIS IS A legacy that all people ought to be proud of. It is sad that many people who grew up here probably think Lincoln’s only tie to Chicago is that the bed upon which he died at the Petersen House in Washington is now on display at the Chicago History Museum (generations of school children, including myself, have walked by the bed as part of elementary school field trips).

Lincoln in his own lifetime saw the rise of Chicago to a city of influence, and he used its developing power to boost himself from obscurity as a central Illinois politico to a serious presidential candidate.

For starters, it was the Chicago Tribune that used its muscle to boost Lincoln into the ranks of the powerful. When one considers that he was little more than a former state legislator who had served one term in Congress (and lost his one bid for the U.S. Senate to Douglas), the newspaper’s use of its influence is a significant achievement.

It was at a nominating convention in Chicago that the then-fledgling Republican Party chose Lincoln to be its candidate in the 1860 elections that resulted in the first victory ever by a GOP nominee.

THERE ALSO IS the fact that after Lincoln’s death, his family relocated from their downtown Springfield home (located about a two-block walk from his law office and the Statehouse building that was then in use) to Chicago. Who’s to say that Lincoln (had he lived) would not have retired to the Second City, and could have been one of the city’s elders in his final years of life?

It was as a Chicagoan that Mary Todd Lincoln fully developed the flaky reputation by which most people remember her today. And it was in the Cook County court system that her son, Robert, ultimately had to trust to have his mother committed to the Bellevue Place sanitarium in Batavia, which has since been converted to rental unit apartments.

I’m not saying we need to erect a plaque at the site of the old courthouse, reading something like, “On this site in May, 1875, Judge Marion R.M. Wallace declared former first lady Mary Todd Lincoln to be insane.”

But one could easily envision a plaque at the southeast corner of Lake and Market streets. That was the site of “The Wigwam,” the nickname given to the giant tent that was erected for the then-princely sum of $5,000 to house the 1860 convention that tabbed Lincoln to be the GOP nominee.

THE LINCOLN LEGACY is just as much a part of Chicago history as it is downstate Illinois, even though we don’t have Lincoln’s home and law office like Springfield or the actual courthouses where Lincoln actually practiced law like many central Illinois counties.

I can’t help but notice looking at the schedule of events for the upcoming year that many are historical forums taking place on university campuses. A perfect example is the March 13-15 Illinois History Symposium to be held at Millikin College in Decatur, where several speakers will give their impressions of Lincoln’s continuing legacy.

Why can’t events like that be held in Chicago, which has several universities of quality? Events could be held at the University of Illinois at Chicago or Loyola University or Northwestern University in Evanston. I’d also suggest the University of Chicago, except my dealings with the university throughout the years reveals a mindset that thinks local issues are beneath their mission in life. Would the good people who root for the Maroons think that Abraham Lincoln is too parochial?

There’s no reason we in Chicago should surrender our share of the fun in celebrating the life of Lincoln. Here’s hoping that officials can get their act together and stage some events to celebrate the life of Honest Abe so that I don’t have to make the 200-mile drive south to Springfield to get my fill this year of Abe-mania.

EDITOR’S NOTES: To date, very little of the actual celebrating of the life and legacy of Abraham Lincoln (http://www.lincoln200.net/index.asp) is scheduled to be celebrated anywhere near Chicago.

This is how the White House (http://www.whitehouse.gov/history/presidents/al16.html) officially remembers the Lincoln legacy.

Lincoln buffs prefer to remember their Lincolniana (http://www.alplm.org/home.html) in this way. For what it is worth, everybody on Earth at some point in their lives should take a trip to Springfield (the one in Illinois) to learn about Lincoln.

Unlike Gen. (and president) U.S. Grant, there’s no mystery about where Lincoln is buried. He remains (http://showcase.netins.net/web/creative/lincoln/art/tombtour.htm) at Oak Ridge Cemetery in Springfield (his body wasn’t revived for a few seconds after being dug up from a grave at Arlington National Cemetery, as the Weekly World News reported a few years ago), which means there are generations of central Illinois residents whose claim to fame is that their earthly remains lie within shouting distance of a former president.
Posted by Gregory Tejeda at 12:00 AM