When Puerto Rican officials in New York City honor Indiana this summer, they are going to expose what has always been the state’s paradox.

In theory, Indiana’s primary city is also its capital city – Indianapolis ought to be the mecca of that rare breed of human being that willingly calls itself, “Hoosiers.” Yet the engine that in some ways provides what little significance Indiana offers comes from the northwest counties.

YOU KNOW, THE area on the South Side surrounding the Calumet River in Illinois that swings east across State Line Road to encompass a bi-state section known locally as the Calumet Region (the Region, for short).

The cynic in me would say the only part of Indiana that matters is the portion of the Chicago area that spills over the state line into Lake and Porter counties. With nearly 20 percent of the state’s overall population of 6.31 million, the area would be a hefty city in and of itself – if only the people of those counties had ever incorporated themselves into one municipality, rather than splitting themselves up into several small cities and towns.

The fact that Lake and Porter counties (Hammond, Gary and Valparaiso, for those who are more comfortable referring to cities instead of counties) are an extension of the Chicago area means, among other things, that the bulk of any Latino population in Indiana is to be found there. 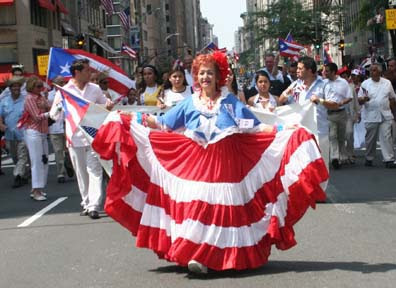 Scenes like this woman wearing a dress in a Puerto Rican flag motif during the 2005 parade in New York are likely to be repeated in this year's parade June 8. Photograph provided by Puerto Rican Day Parade.

So when officials organizing the Puerto Rican Day Parade in New York (it’s actually a several-days long series of events honoring Boricuan culture) decided to pay tribute to the state of Indiana as part of this year’s festivities, it turns out that the bulk of the delegation that will represent the state is really a batch of Chicago-area people.

THE PUERTO RICAN Parade and Cultural Organization of Northwest Indiana is taking the lead in organizing the state’s delegation, which will participate in the New York parade on June 8, then return to Indiana for their own parade this summer on July 20.

In a sense, New York gets to be a rehearsal for the Indiana version.

Personally, my first reaction to learning of the heavy Chicago-area presence to the Hoosier delegation for a Puerto Rican parade was to wonder why any Mexicans would be willing to participate.

Northwest Indiana’s Hispanic community is still predominantly Mexican-oriented and centered around East Chicago, Ind., where Mexican immigrants who decades ago worked in Chicago South Side and Gary, Ind., steel mills turned to the Illinois-Indiana border town for a place to find affordable housing.

THE TOWN REMAINS a hotbed for Latinos because it is a place where both Español y English are spoken. These days, 51.6 percent of the town’s total population of 31,366 people identify themselves as Hispanic.

Like many other aspects of life, Hispanic Hoosiers are becoming both larger and more diverse. One can no longer presume that the Spanish-speaking person who maintains an address in Indiana comes from places like Jalisco or Michoacan.

He could just as easily have his ties to San Juan and have concerns about whether his native island should someday be a state or remain a commonwealth (only the most delusional of Puerto Ricans seriously believe independence is the way to go).

In the Calumet Region, the Puerto Rican community became big enough to warrant its own group in 1996, and the local parade became an annual summer event shortly thereafter.

OTHER TOWNS IN Lake County, Ind., also have some Spanish-speaking populations, and the total is 13.9 percent Latino of the 494,202 total people who live there (almost 10 percent of the state’s population is in one county).

The state tribute is a regular part of the annual parade in New York. Although this is the first time Indiana was chosen, each year a state is singled out by parade organizers as a way of showing that Puerto Rican people are not restricted purely to a Spanish-speaking barrio in New York.

That’s a good thing. All people need to realize the Latino population is going to be a significant part of the United States. Instead of trying to figure out how to deport it (that wouldn’t work for Puerto Ricans, since they are U.S. citizens by birth), we need to celebrate its contributions to the American Way of life.

AND IT IS not just inner city neighborhoods where Spanish is becoming an accepted second language. Even places like Indiana (which was once a hotbed for Ku Klux Klan activity outside of the South) are seeing increases in Latino populations.

Although the Latino populations in Indiana made up only 4.8 percent of the overall state as of 2006, that figure likely is obsolete. Between 1999 and 2004, the number of Hispanic people living in Marion County (Indianapolis and its suburbs) more than tripled from just over 13,500 to 47,000.

How accurate that figure is remains uncertain. Part of the problem is the fact that Latino populations can be hard to count in that some elements of the society aren’t particularly interested in being accounted for (in the past, many European ethnicities experienced the same dilemma). Indiana officials themselves concede that the official U.S. Census Bureau count of 214,000 Hispanic Hoosiers in 2000 is too low. They say 242,518 is probably a more honest figure.

But despite the growth (a nearly 350 percent boost in five years is tremendous), there’s no denying that the heart of the Hoosier Hispanic community is in the Calumet Region, where officials estimate there are just under 68,700 Latinos in Lake County, Ind., alone – about 30 percent of the state’s total.

THAT IS WHY it will be largely a Chicago-area contingent of people representing the Land of Quayle come parade time in New York City.

It will be interesting to see the Boricuan community as they represent both their home state and their regional home. Just because they live on the “wrong” side of State Line Road does not mean we should deny them their place among the areas that, when put together, comprise the Chicago metropolitan area.

State borders are not always absolute demarcations. Consider Illinois, where the St. Louis area crosses the Mississippi River to include Madison and St. Clair counties. Even outside of municipalities like Alton, Belleville and Brooklyn (the Illinois town, not the New York borough), there are life-long Illinois residents who associate themselves with the Missouri city rather than our own glorious metropolis.

Places like Gary, Ind., and East St. Louis, Ill., have always struck me as carbon copies of each other, and not just because both have seen better days in decades past. Both are small cities that have to look across a state line (in the case of Gary, they also have to squint through pollution caused by still-operating steel mills) to see the focal point of their metro existence.

IT ALSO WILL be good to see a Chicago-area presence in the New York Puerto Rican parade, which should not be thought of as just a day for the hired help to inconvenience the rest of us with their partying.

It is a day to celebrate yet another culture that is merging into the overall picture that makes up the modern-day American Way of life.

In that sense, the Puerto Rican Parade in New York (and similar events held across the country, including June 14 in Chicago) is a day when we can all be honorary Puerto Ricans.

It’s just like St. Patrick’s Day, only we don’t have to slosh our way through all that disgusting green-dyed beer. 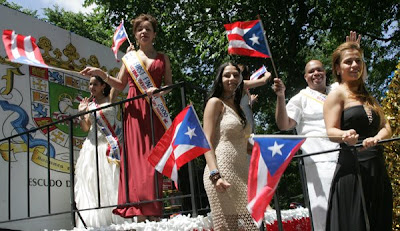 What point would there be to a parade if there weren't a few pretty ladies wearing sashes, tiaras and form-fitting gowns, such as these girls who participated in the 2006 parade. Photograph provided by Puerto Rican Day Parade.

EDITOR’S NOTES: Puerto Rican activists in the Indiana portion of the Chicago area have their own cultural festivities (http://www.officialpuertoricanparade.com/) scheduled for this summer.

“Hoosier” and “Hispanic” are not mutually exclusive terms anymore. The Latino population (http://www.insideindianabusiness.com/newsitem.asp?id=16567) in Indiana is rapidly rising.

Indiana state officials concede (http://www.in.gov/ichla/conference/population.html/) their Latino count is off by a few tens of thousands of people.

For those whose only knowledge of the Puerto Rican Day parade is the “Seinfeld” episode where Kramer wound up stomping all over a Puerto Rican flag to try to put out a fire, the event (http://www.nationalpuertoricandayparade.org/index.html) is much more involved than a single parade.