Hillary R. Clinton may get a majority of Hispanic people to vote for her in this year’s presidential primary elections, but that is not evidence she has some natural affinity with those people whose ethnic roots tie them to a Latin American country.

The simple fact is that neither of the remaining Democrats who dream of being president is doing much to reach out for the support of Latinos. Hillary Clinton is the default choice for a group of people whose primary concerns focus around trying to assimilate into the political culture of the United States of America.

For those of the various ethnicities who comprise Hispanic people (or Latinos, if you prefer – I consider the two terms interchangeable), being able to vote is a sign that they have arrived in this country; that they truly belong.

THE LARGE NUMBERS of Hispanic/Latino people who are still immigrants cannot register to vote, so they are not a factor on Election Day. Until the percentage of Hispanics who can vote becomes more in line with their overall population Latinos are not going to lead any reforms of this country’s political set-up.

The reason more Hispanic people do not consider themselves Republican (59 percent identify themselves as Democrat, according to the Pew Hispanic Center) is that GOP officials are too quick to pander to xenophobic elements of society. So Latinos are becoming Democrats by default. But since Hispanics in a position to vote are largely people desiring to be a part of the establishment, they will back the establishment candidate. 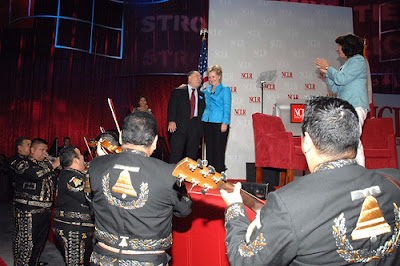 Hillary Clinton's presidential bid is more like a default vote for many Hispanic people. Photograph provided by Hillary Clinton for President.

That niche this time around is filled by Hillary Clinton, and that is why the roughly 9 percent of the overall electorate who are Hispanic (16 percent in Illinois) is giving a majority of its support to the former Arkansas and U.S. first lady.

You didn’t seriously think Latino people sincerely liked Hillary or her positions on the issues, did you?

THE DOMINANT FACTOR in this year’s presidential primary elections is the generation gap.

If Barack Obama is to win, it will be because he gets a groundswell of support from the youth of America – who largely think Hillary is a ‘60’s Child and the wave of the past, while Barack is here and now and what is really happening.

The older generation (generally, mid-30s and up) charitably sees Obama as a youthful politico who should wait his turn to run for the highest office in the land, while Clinton has the benefits of age and experience.

FOR HISPANIC PEOPLE, it is different.

Regardless of age, gender or education levels, Clinton is favored by those people with ethnic ties to places where “hablamos Español.” It applies for both those who have made it all the way through the immigration process to become citizens, and those actually born in the United States.

Hispanic people do NOT want to get caught on the losing side of an election. They want to be in support of the winner.

Many view the Obama campaign talk of change and reform as the political equivalent of childish babbling, particularly since they many are willing to believe the basic premise of political professionals – young people don’t vote.

SINCE THEY DON’T vote in significant numbers, many Latinos just do not believe Obama can win.

Even if they think he has a chance, many would still be more comfortable with an establishment Democrat like Clinton. Change (which is how they perceive Obama’s talk of government reform) is not their top priority – gaining a share of the spoils of politics is what matters. To people with this mindset, the Obama campaign is about esoteric concepts that don’t particularly interest them.

It is similar to the old Chicago political mindset that the late Chicago newspaper columnist Mike Royko mocked when he said the Chicago city motto should be changed from “Urbs in Horto” (“City in a Garden”) to “Ubi est Mea” (Latin for, “Where’s Mine?”), except for Hispanic people, it would be “¿Donde esta mio?”

It also doesn’t help Obama with Hispanic people that he was unknown outside of Illinois until 2004, and remained largely anonymous to the national public until last year.

PEOPLE WHO WANT to become a part of the establishment are not really interested in meeting anybody new. They want to know how to get an introduction to who controls power now. That is how they perceive Hillary Clinton – a candidate who along with her former president husband has a history of not being hostile (like some Republicans) to their interests.

It is not a mistake that the only one of the two dozen states where elections took place Tuesday where Obama won a majority of the Hispanic population was his home state of Illinois. Exit polls showed Obama took 52 percent of the Hispanic vote in Illinois – much less than his 64 percent of the overall vote and 94 percent among African-Americans.

In Illinois, Obama is the incumbent U.S. senator who has been a very visible part of the government establishment that Hispanic people want to be a part of. Rep. Luis Gutierrez, D-Ill., was correct in telling WBBM-TV that the reason Illinois Hispanic people differed from their counterparts in other states is because, “we know Obama.”

IF OBAMA IS to get the same majority Hispanic support in remaining states with primary elections (Texas’ significant Latino population will vote March 4), he’s going to have to reach out to Hispanic people and make them feel as though they were a focal part of his vision.

Thus far, he hasn’t done that.

Admittedly, it’s not his fault. No one candidate can ever truly appeal to everybody. But in trying to gain the support of the Youth of America, the country’s more intellectual elements and bolster his support among African-American people (where Hillary Clinton once held a commanding edge), the Latino/Hispanic vote seems to be squeezed out.

The Obama camp’s liberal vision is flexible enough that it can be expanded to include Latinos, but that inclusion does not seem to be Barack’s priority. There are times when it seems his only outreach to Latinos is to provide a Spanish-language option for people who check out his website.

MANY HISPANIC PEOPLE figure they’re not going to make much of an effort to learn more about him, if he doesn’t seem to be reaching out to them.

Obama’s effort to increase his African-American support grates at some Hispanic people, particularly when they compare it to the lukewarm efforts the candidate has made to get the Latino vote. They feel like Barack has chosen someone else instead of them.

Now I know Latinos who have racial hang-ups (some are even my relatives). But it would be a mistake to let this devolve into an “us versus them” situation, which is what some people are trying to do.

Such talk plays into the hands of those people (mostly conservatives who want to view the world in terms of “us” and “them” – and generally think of all non-Anglo people as “them”) who want the Democratic primary elections to turn into a race war, of sorts, between the United States’ Latino and African-American populations.

WE NEED TO question the motivation of the people who bring this issue up.

Many of them want to label Hispanic people as some form of racists as a way of fracturing the Democratic party’s constituency, with the resulting strife giving a boost to the Nov. 4 election chances of whichever Republican wins the primary.

In reality, it is not African-American candidates whom Latino voters are opposed to. Our priority these days when we are in a voting booth is to cast ballots against the people who appear to be hostile toward our existence.

Even if the presidential bid of Rep. Tom Tancredo, R-Colo., had not collapsed early on (he quit campaigning weeks ago, but his name remained on the GOP primary ballot used in Tuesday’s Illinois elections), there would have been a serious effort to ensure that everybody with even the slightest touch of Latino blood in them would have voted for, “Anybody but Tom.”

LIKEWISE, IF DAIRY magnate (and now, Republican congressional nominee) James Oberweis ever follows through on the rumors that he will run for Illinois governor as a Republican after a term or two in Congress, he will get the “hostile” treatment if he ever tries to campaign in places like the South Chicago, Pilsen or Humboldt Park neighborhoods.

Latinos still remember how he pandered during his past campaigns (and even did a little in his most recent bid for the U.S. House seat being abandoned by retiring Rep. J. Dennis Hastert, R-Ill.) to the elements of our society who want to turn illegal immigration into some sort of problem caused by Hispanic people.

Hispanic people know who their political enemies really are.

Our “enemigo” is not Barack Obama. He just hasn’t done a good enough job of explaining that he really is our “amigo.”

EDITOR’S NOTES: Moments like this 2007 on-air appearance on a Los Angeles radio station (http://www.cnn.com/video/#/video/politics/2007/08/10/sot.obama.singing.cnn) have the potential to make Obama look ridiculous for Hispanic voters, if he’s not careful.

A comparison of the Obama (http://my.barackobama.com/page/content/espanol) and Clinton (http://www.hillaryclinton.com/es/) Internet presences “en Español” can be made by checking out the sites.
Some people might think of Barack Obama as the latest version of "the Greatest," but he's got a ways to go before Latino voters think of him that way. 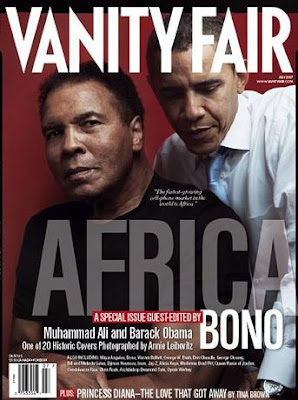