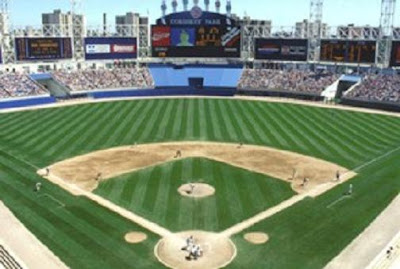 I hope to spend a few summer nights this year at U.S. Cellular Field, rather than celebrating the 100th consecutive season without a World Series title. Photograph provided by State of Illinois.

(NOT IN) TUSCON, Ariz. – When I look at the baseball club that will represent the image of Chicago’s South Side this summer, I’m not sure what to think – other than to wonder if the White Sox are looking too much to the past instead of the future.

But my baseball attentions will be settled on U.S. Cellular Field this year, just as in past years. The Chicago Cubs might as well not even exist (be honest, the only reason they will contend for a division title is that the division they play in stinks so bad the Caribbean Series champion Licey Tigers of the Dominican League could win it).

I’D RATHER WATCH another White Sox team struggle to stay afloat, than follow the Cubs this year as they officially make it 100 full years without a World Series victory (and 63 years without even appearing in the Series).

But watching the White Sox won’t be easy, particularly after learning the team may try to work out a deal to get Bartolo Colón to pitch for them this season. I remember the season he had for Chicago back in 2003. It wasn’t bad.

Then, I remember that ’03 was five years ago – and that Colón has had his share of physical ailments since leaving the White Sox to pitch for the Los Angeles Angels.

When combined with Jose Contreras, the Cuban exile who back in 2003 was the star of the Cuban national baseball team who was expected to be a star in Major League Baseball for years to come, what I see is a team that is hoping too much for baseball talent resurrections.

WHILE I REALIZE that in a certain sense, the White Sox management made some moves that helped to improve the ball club a little bit, I just am not optimistic about 2008.

I was NOT upset this winter when longtime Minnesota Twins star Torii Hunter chose to take a big-money ($90 million over five years) contract with the Angels, rather than accept a respectable pay contract with the White Sox.

While I respect Hunter’s defensive skills in playing the outfield and realize he would have been an upgrade over the White Sox center field situation, I NEVER thought he was so special as to warrant one of the top salaries in professional baseball.

But in their attempt to make room on their payroll for Hunter or someone of his superstar ilk, the White Sox hurt their one strength – starting pitching.

WHEN THE 2007 season ended, I was initially optimistic for ’08 because I liked the notion of a team built around a Big Three of Mark Buehrle, Javier Vázquez and Jon Garland. No other team would have had a better starting rotation, and only a few could say they were as good.

But I’m still not over the loss of Garland, who was traded away to the Angels on the theory that eliminating his salary demands (his contact expires at season’s end and it likely will take a sizable financial offer for some team – the Yankees? – to sign him in the future) would make it possible for the White Sox to bolster so many other areas of the team.

Instead, the best they could do was come up with Nick Swisher, the Oakland Athletics outfielder who, while bearing some talent, is probably best known in these parts because his father, Steve, played for the dreaded Cubs back when I was a kid. (Swisher the elder and Larry Biittner will always be the quintessential Chicago Cubs in my mind, and that’s not good).

Jose Contreras, the aging pitcher who allegedly is in his mid-30s (but could really be in his early 40s, he had a lengthy career pitching in the Cuban League and for Team Cuba before coming to the United States), is going to have to be a reliable pitcher if the White Sox are going to avoid fighting it out with the Kansas City Royals for last place in their division.

LIKEWISE, THE SIGNING of Colón (if it happens) is now an integral move. Contreras and Colón pitching up to their ability when they were both five years younger, combined with Buehrle and Vázquez, would give the White Sox a respectable pitching rotation. Contreras and Colón showing their age (and in Colón’s case, his weight) leaves the White Sox with a weakened rotation of pitchers who should be spending the Summer of ’08 entertaining the fans of the Birmingham Barons.

I really don’t know what to expect this year.

In theory, the White Sox have a talented heart of the batting order of sluggers Jermaine Dye, Paul Konerko and potential future Hall of Fame slugger Jim Thome (his Home Run No. 500 was one of last year’s highlights). In theory, they are a team that can keep up with the Detroit Tigers and Cleveland Indians in their division and contend with the Boston Red Sox, New York Yankees and the Angels for the ’08 American League championship.

But then I wake up from my baseball dreams, and realize the ’08 White Sox have the potential to resemble the Sox teams of my youth. Does anybody else remember Harry Chappas and Bill Nahorodny?

HAVING TWO LOSING seasons (’07 and ’08) would undo any emotional goodwill the White Sox developed by actually winning in 2005 the first championship by a Chicago baseball team in 46 years and the first World Series title in 88 years.

I could handle the idea of a crummy ball club if I knew for sure it was going to happen. I came of age following Chicago baseball back in the 1970s when winning seasons were rare, and both teams usually stunk so bad that the real competition was to see which one finished in last place in their division with a worse record.

The concept of White Sox teams that perennially finish the season with winning records and are considered a factor in the pennant race (which has been the case, more or less, for the past 18 years) is an alien concept – one I don’t ever think I’ll get used to.

Perhaps it is just the difference in character between fans of the White Sox and the Cubs. The latter are the eternal optimists. Despite watching their team get humiliated in the first round of the National League playoffs, Cubs fans are convinced that 2007 was something historic in nature that should forever be celebrated. The entire 1969 team (which didn’t even make it to the playoffs) is worthy of Hall of Fame induction, in the minds of Cubs fans.

BY COMPARISON, THERE was a large portion of White Sox fandom that was convinced the whole season would collapse in failure all the way up to the point that shortstop Juan Uribe fielded that hard-hit ground ball and made a sudden throw to Konerko for the final out of the last game of the World Series, preserving a 1-0 win by Freddy Garcia.

Then, we became convinced that something bad would happen in future years – which is why some of us are not the least bit surprised that the Sox played so badly last year and may do so again this year.

Why stick with the Sox?

CUBS FANS COME from the suburbs and out-of-town, and view their time spent at Wrigley Field watching the Cubs as a way “to relax.”

By comparison, to White Sox fans, “there is nothing casual or relaxing about baseball,” and that only, “the strong, the dedicated and the masochistic” are South Side baseball fans. Some people might argue that such an attitude is insane.

MAYBE CUBS FANS are a more reasonable breed of human being – remembering that a pennant is not a matter of life and death.

But if it is really just a game, then what’s the point of rooting for it?

Spending this summer wondering if Colón will revert to his peak career form and give the White Sox one last great year in what has been a respectable professional baseball career gives us White Sox fans something to take our minds off the serious problems that exist in our lives.

AND WHEN THE White Sox win, it provides an emotional boost for the Sox fan that a Cubs fan who is primarily interested in beer and ivy on the outfield walls can never appreciate.

That’s why no matter how much people want to romanticize the 100-year streak of Cubs teams failing to win the World Series (or even appear in it the past 63 years), no Cubs championship of the future will ever mean as much to the character of Chicago as the 2005 White Sox or any future White Sox champion meant to the city.

And for those who would note the regional character and say a Cubs championship would mean more to people outside Chicago than a White Sox title would, all I have to say is, “Who really cares what plays in Peoria?”

EDITOR’S NOTE: For those who just have to have a Cubs-related tidbit, all I’ll say is I will not criticize Aramis Ramirez for his weak defense of cockfighting in his native Dominican Republic. My views on Ramirez are identical to what I wrote at The Chicago Argus’ sister weblog, The South Chicagoan, (http://southchicagoan.blogspot.com/2008/02/cockfighting-fan-beisboleros-bring.html) about pitchers Pedro Martinez and Juan Marichal.
Posted by Gregory Tejeda at 12:02 AM

You're stereotype of Cubs fans as drunk, ill informed suburbanites is no more true than the stereotype of Sox fans as filthy, crystal meth addicts with mullets. Yes I know those idiots are overrepresented at Wrigley, but that's because they are the only one's who can afford the tickets anymore. Cubs fans are passionate, knowledgeable and starving for a World Championship. You are clearly well informed about Chicago baseball, you should know better.

You said you're a sox fan, so how can you possibly sink any lower?

I agree with Eddie. You Sox fans are even more delusional and out of touch than us Cubs fans. I admit that the Cubs would have a tougher time winning some of the other divisions, but they do have a solid club and would compete better in any division than the Sox. You should revise your statement to say that the only reason the Cubs are going to win the division SO EASILY is because of the division they play in. Further, say what you will about the likelihood of a Cubs World Series title, but there is absolutely no way in hell that anything positive the Sox do could EVER compare to the effect that a Cubs World Series win would have on the city. The city would shut down and turn into Bourbon St. or something; the Sox' title was a mere blip on the radar and is practically forgotten already. I personally care more about whether the Cubs win than beer or ivy, so realize that your stereotypes that you hold so near and dear are played-out. That said, enjoy your mullet, meth, and tattoos while your team struggles for the foreseeable future. Ha.