Not even my alma mater is safe these days

I have often heard my mother say she is thankful both my brother and I have completed our college educations.

It’s not that she’s pleased we went to college (although she is). It is that she is grateful neither of us is still hanging around college campuses, which in recent years she has come to see as places that attract too many strange people.

HER MOST RECENT round of worrying came last week after she first learned of the quintuple slayings at Northern Illinois University in DeKalb. The thought of a former student (and one who actually graduated with honors) losing control of himself and opening fire on a hall full of students has her creeped out.

It also has my aunt (her sister) upset, because my cousin is an NIU alum. The two of them have speculated how much worse things could have been, if we had had family on that rural Illinois campus last week.

Now it is easy for me to dismiss these concerns as just the nitpicking of a couple of people who are over-reacting. But apparently, they aren’t alone.

Northern Illinois University police officials have gone out of their way to make it clear that nothing they could have done could have prevented the incident from occurring. 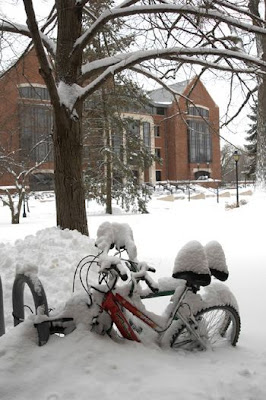 OFFICIALS AT OTHER universities are feeling the need these days to assure their students, parents and alumni that their campuses are as safe as any place could possibly be.

How else to explain the e-mail I received Friday from officials at Illinois Wesleyan University – the Bloomington-based college from which I graduated some 21 years ago.

University President Richard Wilson (whom I have never met because he was not at IWU back when I was a student there) and university officials felt the need to include me on their list of e-mail recipients who received a message telling me how the Northern Illinois University incident impacts colleges everywhere.

Now I’m sure the current student body and parents of those students were the primary recipients, since I am not a significant financial contributor to my alma mater (why I don’t is another subject altogether) and I have not even set foot on the campus for even a brief visit in nearly nine years.

SO IT IS nice that I could contact the university chaplain if I feel the need for spiritual support in coping with the news out of DeKalb. But I doubt I will take them up on the offer.

What caught my attention about Wilson’s mass e-mailing was the portion that basically told me Illinois Wesleyan could not have prevented a similar incident from occurring there.

The key, Wilson wrote, was that university officials in Bloomington and on other college campuses, “remain vigilant in our efforts to attend to the welfare of our campus community.” He also pointed out the portion of the university website that provided a summary of the IWU emergency response plan, and just how students, faculty and staff would be notified in the event of an actual traumatic experience.

The place we students used to mockingly call “Wesley-land” and think of as our own little academic island in the cornfields of central Illinois could just as easily have a former student wander in off the streets and pull a similar incident.

I HONESTLY DO not know how I would have handled such an incident happening in my proximity when I was a college student. I’d like to think the level headed demeanor I developed as a reporter for dealing with coverage of crime and violence would have kicked in a few years sooner than it did.

But nothing of the magnitude of what happened at Northern Illinois University, or last year at Virginia Tech, occurred at the IWU of my memories.

The closest thing to a violent crime during my college years was during my first year when David Hendricks was arrested in 1983 and charged with the brutal slayings of his wife and three kids. He was convicted, spent a couple of years in prison before the conviction was overturned, then acquitted on re-trial.

The slayings of the Hendricks family officially remain an unsolved crime for the Bloomington police department.

BUT IT WAS easy for us students to ignore that because it happened in town, and to our college-kid arrogance, it just didn’t matter. We envisioned some sort of magical force field at campus’ edge to keep us safe.

And insofar as the one student-oriented act that got national attention, it wasn’t even us. I remember sitting in a college dormitory trying to study when I heard the word that at Illinois State University, the Normal, Ill.-based college whose campus was about a five-minute drive from ours, students were protesting what they perceived as excessive force being used against them by local police.

That protest turned from a totally legal march through Normal into a rampage where students committed vandalism against public buildings and caused several hundreds of thousands of dollars worth of damage.

That one was too easy for us IWU kids to laugh off as a bunch of goofs run amok.

I REALLY DON’T want to believe that times and people have changed that much during the past two decades since I was in Bloomington and my brother did a stint in Urbana at the University of Illinois.

I honestly find it most comforting to just acknowledge that bad things can happen, and there’s no way to absolutely protect oneself from harm.

After all, if there is truly no safe place, then there is no point to worrying. Precautions can make it less likely that someone will put themselves in harm’s way. But, personally, I’d rather not have to go through life with extra worries on my mind. I’d rather just try to live life to the fullest, without having to restrict myself out of fear of what could happen.

Also, a part of me thinks it is probably the height of arrogance for anyone to seriously think they can find somewhere to go where they can be absolutely free of violence or harm.

IT ALMOST SOUNDS like those people think they are too good to be hurt, while people on the college campuses where traumatic events did occur somehow deserve what they got because of where they happened to be at the time.

College campuses officials and security are not alone in having feelings of insecurity. In the normally tranquil southwest suburb of Tinley Park, there was a quintuple slaying earlier this month at the shopping center located just blocks from my mother’s residence.

Residents there are still going through their own grief. In fact, a prayer service Sunday at the Christian Life Center gave locals their chance to try to overcome their feelings of forboding.
Nobody deserves to have to go through what happened in DeKalb or Tinley Park, not the students or faculty on campus or suburban shoppers who are going to have to wonder when (not if) such an incident will again occur in their lives.

THE FAMILIES OF the five students or the five women shopping at the Lane Bryant store who were killed shouldn’t have had to be put through the grief of losing a loved one just at the point when they were starting to get near the prime of their lives and potentially go on to make something of themselves. Those families are going to spend the rest of their lives wondering what could have been.

I even feel sympathy for Robert Kazmierczak, the father of Steven, whose emotional demons got the best of him and caused him to build up the small arsenal of pistols and a shotgun that resulted in last week’s shooting rampage.

Regardless of what anyone thinks of Steven Kazmierczak these days, we have to concede that Robert (who is not in the best of health these days) lost his son, and in a way that will prevent him from doing much in the way of public mourning.

Just as much as anyone else affected by the DeKalb shootings, Robert’s emotional and physical well-being deserves to be in our prayers.

EDITOR’S NOTES: My alma mater went out of its way to reassure me that they were doing (http://www2.iwu.edu/CurrentNews/newsreleases08/news_niu_208.shtml) everything possible to prevent a similar occurrence from getting out of control at the Bloomington campus. I guess the alumni association hasn’t given up on getting a sizable donation from me someday.

Here’s a semi-competent analysis (http://www.huffingtonpost.com/2008/02/15/illinois-shooting-tragedy_n_86851.html) of the news coverage generated of the Northern Illinois University slayings. While no one has seriously offended me with their approach, I also haven’t seen anything that makes me think somebody will win their Pulitzer Prize for their work the last few days.
Posted by Gregory Tejeda at 12:00 AM