NOTES FOR INK-STAINED WRETCHES: Sun-Times Co. newspapers ought to split

The parent company of the Chicago Sun-Times has hired a firm to help determine just what is a reasonable price to ask when it puts itself up for sale later this year. Hopefully, this means we’re another step towards the breakup of the Sun-Times from all the suburban newspapers it has acquired in the past two decades.

For the record, Lazard Ltd. is studying ways to make the company more profitable. But stockholders of the Sun-Times Media Group have made no secret of the fact they want to be bought out – thereby ending their 14-year-long stewardship of the Sun-Times and imposing the fifth sale of the newspaper in the past quarter century.

THE COMPANY THAT once was an international media conglomerate known as Hollinger and run by now-convicted Conrad Black would love it if someone would come along and buy the whole package intact. My understanding is that the federal government will hit someone with a large tax bill if the company is sold off piecemeal.

That tax hit is the reason why the Chicago newspapers were held on to for so long, while other pieces like the London Telegraph and the Jerusalem Post were sold off years ago.

But I’m skeptical that anyone is going to want to take on the nearly dozen daily newspapers along with Pioneer Press, a Glenview-based company that publishes nearly 70 editions of a weekly newspaper. 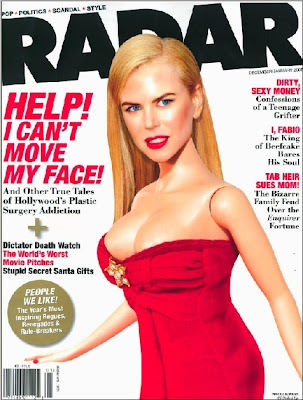 Is this attitude the future for the Chicago Sun-Times? Illustration provided by Radar.

FOR THE INDIVIDUAL newspapers and the people who still read them, a break-up would be a good move. The concept that the Sun-Times will no longer be a sister newspaper to the SouthtownStar, the Herald-News of Joliet or the Naperville Sun (just to name a few titles) makes so much sense because the idea that these papers were considered all one unit with the Sun-Times was always an awkward fit.

Those newspapers often circulate in distinct portions of the Chicago area with little overlap. Yet the story-sharing measures that Sun-Times management has tried to impose on its papers has often resulted in newspapers that are filled with junk that is not directly relevant to the people actually reading any one edition.

They also often produce newspapers that look too similar to each other. There are times when the only difference between the Sun-Times and the SouthtownStar (both of which I read daily – I still miss the Star Newspapers, which I wrote for some twenty-something years ago) is the page size. Story selection is virtually identical.

THE LAST THING a newspaper should ever be is generic, and that is what has happened to the newspapers owned by Sun-Times company. If sold off, newspapers like the News Sun of Waukegan and the old Gary Post-Tribune (which now is headquartered in Merrillville, Ind.) will get back a sense of freedom and likely will come to view their ownership under Sun-Times as an aberration – if not an outright absurd era.

Splitting up the company makes sense from a business standpoint because the smaller circulation titles are likely to attract more attention from buyers. Smaller newspapers are often preferred because they are less expensive to publish and require less gross income in order to achieve a profit.

That’s why the Sun-Times itself has an uncertain fate. Anybody who buys it will have to go into head-to-head competition with the Chicago Tribune. Unlike a small market newspaper where there is no direct competition and one does not have to pay as much attention to editorial quality, anybody who buys the Sun-Times is going to have to come up with a serious plan to improve its quality.

Quality means money being spent. Most newspaper companies these days are run by corporate drones who don’t have a clue how to boost quality or increase circulation. The Sun-Times is not a challenge for the weak-hearted.

NEVERTHELESS, I CAN’T help but think there will be a buyer.

Somebody with a desire to try to influence Chicago’s economy, culture and politics is bound to be willing to take on ownership of the Bright One. After all, buying the Sun-Times is going to be significantly cheaper than trying to buy the Tribune if (and when) real estate developer Sam Zell ever decides to put that newspaper on the auction block.

Some people remember Yusef Jackson, the Chicago businessman whose father is a prominent civil rights leader and whose older brother is a member of Congress. His business partners made an effort years ago to place a bid to try to purchase the Sun-Times.

IN MANY WAYS, he is exactly the kind of person who would be likely to purchase the Sun-Times. Getting the newspaper now (possibly at a “bargain” price due to the business trauma it underwent from Black and his ilk) would give Jackson and his business partners a sense of Chicago clout apart from what he gets from family ties to his father and brother.

What kind of newspaper would Jackson and his business partners publish?

They own one other media property – the pop culture magazine “Radar.” That publication lists Yusef D. Jackson on its masthead as the “chairman” of Integrity Multimedia Co.

THE MAGAZINE OCCASIONALLY does political reporting and media criticism. It has a harder edge than the now-defunct “George,” the political fluff magazine published by John F. Kennedy Jr., before his death in an airplane crash.

But celebrity coverage seems to be its purpose for existing. The one time I plunked down $3.99 for a copy, I got a magazine whose lead story was about Hollywood stars who have had cosmetic surgery.

The cover for that issue? It was a picture of movie actress (and former Mrs. Tom Cruise) Nicole Kidman, altered in ways to make her appear to be more well endowed than either Dolly Parton or Barbie.

What other stories are taking place these days in the realm of news media in Chicago and the Midwestern U.S.?

THE WHOLE (media) WORLD IS WATCHING (Madison, Wis.): I have never been to Madison, Wis. I’m not a fan of the University of Wisconsin. Something about the Wisconsin Legislature seems too “goo-goo” for it to be taken seriously.

But I have always been a fan of the Capital Times newspaper, in part because it is one of the few newspapers in this country that deserves to be called “liberal” media. I mean that as a positive.

Now, everybody in the news racket is going to be rooting for the news types in Madison, who in mid-April are going to quit publishing as a daily newspaper. They will continue to publish weekly supplements in the competing Wisconsin State Journal (similar to how the now-defunct Star Newspapers still publishes a twice-weekly tabloid section in the paper formerly known as the Daily Southtown).

BUT THE IDENTITY of the Capital Times will continue to exist as a website. The company is putting its efforts into maintaining an Internet presence that will provide detailed news coverage of the Wisconsin capital city/college town.

Success in Madison could be the light at the end of the dark tunnel that many newspaper companies are staring into these days. If they fail to be profitable enough, then we have to hope that the folks at Google accept the fact they’re going to have to start paying people to generate quality content.

After all, what good is a search engine if the web sites they’re searching are filled with nothing but junk?

‘WORLD’S GREATEST WEEKLY’ RESURRECTED: The Chicago Defender this week officially began its new publishing schedule. It now comes out only on Wednesdays.

The paper has a similar look and feel – even though at 48 pages it was 20 pages thicker than the final “Daily” Defender published Feb. 8. At first read, the paper has significantly less syndicated junk. I only noticed a couple of Associated Press features and photographs. 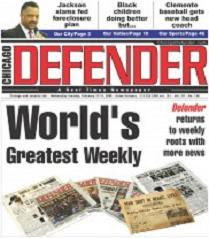 Of course, it is still the same small staff. It looks like their reporters are going to be worked until they drop – unless a serious hiring binge upgrades the newspaper’s talent pool.

One plus. The headline of the first weekly paper was “World’s Greatest Weekly,” which was the newspaper’s motto back in the old days when it could legitimately claim to be one of the best weekly newspapers in existence. Despite the fact that it doesn’t literally fulfill that slogan, I’d like the Defender to keep it. It is a throwback to the paper’s glory days and could be a motto to inspire the staff to achieve greater things.

NOT EVIL, JUST LAZY: Reporters who fabricate stories or make up quotes are not evil, just lazy. I have never made up a story because reality gives me stories far more bizarre and interesting than anything my mind could imagine.

But I’m not terribly offended by the Medill School dean (that’s Northwestern U.’s over-priced and over-rated journalism school) who is facing accusations these days that he made up anonymous student quotes for a column he wrote for an alumni magazine. The quotes themselves were innocuous. It wouldn’t surprise me to learn Dean John Lavine was trying to clean up some quotes to make it more clear what the students meant to say.

In reality, there are times when that is proper. Face it, many people talk in a semi-literate manner (and write even worse). I have always believed the nastiest thing I could ever do to somebody was to literally quote what came out of their mouth.

If Lavine should have done anything different, it would have been to lose the quotation marks altogether and just paraphrase the quotes in his own words. The student journalist who wrote the column in the “Daily Northwestern” newspaper that exposed the questionable quotes thinks he has a story of a journalism dean acting unethnically. Actually, all he has is a piece about a writer who wrote a dull puff piece.

EDITOR’S NOTES: The process of selling off the Chicago Sun-Times to a fifth owner in the past quarter century (http://chicagobusiness.com/cgi-bin/news.pl?id=28222) is proceeding. Whether it will remain connected to various suburban newspaper properties is less certain.

“Editor Emeritus” sounds like it ought to be an academic position. But the Capital Times could lead (http://www.madison.com/tct/opinion/column/271540) the way for many newspaper companies to continue to exist long into the future.

The “World’s Greatest Weekly” is back (http://chicagodefender.com/view.php?I=439) in Chicago.

Here’s the student columnist who started the whole debate about the journalism professor (http://www.dailynorthwestern.com/home/index.cfm?event=displayArticle&ustory_id=fef115ac-93d3-4f9e-b4d5-f8b8f0176809) who may have made up quotes for a column.

"Unethnically?" Try "unethically." I don't buy that yours is the world's greatest weblog, either. It would be more convincing if you let other people say it.