Michelle Obama has nothing to apologize for 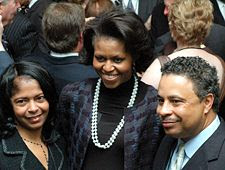 The line stuck in my mind as positive – she is praising white people for looking at a candidate for something other than the melanin content of his skin.

SO IT AMAZES me that some Professional Political Pontificators are twisting the remark into a Michelle-bashing session. I’m still trying to figure out whether the commentators who are pursuing this are sleazy, or just half-wits.

Bill O’Reilly went so far as to say Michelle Obama might be deserving of “a lynching party” if more statements turned up that his supporters could twist into something they perceive as sounding anti-American.

It’s not just the pundits who are criticizing her. Cindy McCain, the wife of GOP presidential dreamer John, dumped on Michelle by questioning her patriotism for making such a remark (which goes along with John McCain’s campaign strategy of recent days where he singles out Barack Obama for attacks).

For the record, Michelle Obama was speaking to a campaign rally in Milwaukee, telling them of how she and Barack had struggled to get through college and make something of their lives.

WHEN SHE SEGUED into talking of life on the campaign trail in rural America and the positive reception she has received in Iowa and similar places, she said, “For the first time in my adult life, I am really proud of my country. Not just because Barack is doing well, but I think people are hungry for change.”

I honestly don’t see how anyone can interpret that into a slam, unless they are the types of people who want to believe that Obama’s race is supposed to be a negative factor, and he’s refusing to play along in the role of an “Al Sharpton” clone.

Now Michelle Obama is about one year older than I am. Both of us attended college in the mid-1980s, and our professional lives date back to the late 1980s. Her “adult life” is my adult life. We both have seen sleazy political acts – many of which were done by people who believe they were acting in the public interest.

I remember Harold Washington being harassed by a City Council majority and demonized by a segment of the Chicago population that was absolutely horrified at the concept of anyone other than a white man of Irish ethnicity being elected mayor of the Second City.

I REMEMBER PRESIDENT Ronald Reagan being more than willing to bash the elements of society less fortunate than himself with policies that were meant to benefit the elite of the nation, out of some misguided idea that their benefits would “trickle down” to the poor.

I remember how George Bush the elder ran for president by dragging up an inmate furlough program in Massachusetts, turning the name “Willie Horton” into a millstone that hung around the neck of Democratic opponent Michael Dukakis and led to his electoral defeat. (The person I always felt sorry for was the one-time Detroit Tigers outfielder of the same name who now has to go through the rest of his life putting up with political snickers).

I remember the eight years of the Clinton presidency as a constant barrage of conservative criticisms leveled because of his alleged liberalism, even though progressives actually thought he was a sell-out who was too willing to cut deals with the opposition.

How else to explain that an investigation into whether federal laws were broken with a real estate deal in Arkansas ended up concluding that the president was less than forthcoming in admitting he cheated on his wife?

AND FOR THE opposition party-led Congress to then use that as an excuse to impeach and try to remove him from office? Not everybody in this country thought Rep. Henry Hyde, the Illinois Republican, was a hero for leading the political circus that permanently twisted the perceptions many U.S. residents have of politics.

I remember the presidency of Bush the younger as one that started under illicit Election Day circumstances aided by Florida elections officials and the U.S. Supreme Court, and evolved into something more than willing to harass (the Patriot Act?) anyone not prepared to follow its goals in lock step formation.

It is one that has dragged this country into a war that some of us see as a pathetic attempt to try to rewrite history so as to bolster his father’s legacy (let’s not forget the first Gulf War of 1990, which really was nothing more than a stupid skirmish in the ongoing conflict in the Middle East).

Our “war” was supposedly to make the world safe from terrorist activity done on behalf of Islam, as though demonizing Arabs and other Muslim followers is somehow justified. And it’s not like our efforts have succeeded. Where is Osama bin Laden?

FOR THAT MATTER, we live in a country where some people try to push the concept that Obama can never be elected president because too many people will mistake him for Osama.

Personally, I find all of these ideas and events to be embarrassing, if not bordering on being un-American.

It is in that atmosphere that the presidential campaign of Barack Obama can be seen as a redeeming factor. I see the seriousness of his campaign as evidence that many of the mean-spirited racial attitudes that inspired my negative list are on the decline. That is what Michelle Obama is praising when she talks of being proud of her country these days.

You’d think conservatives would be happy at the notion that Obama is being considered on the merits of his campaign talk. In theory, it goes along with their talk of wanting a color-blind society – one where a person’s race should not be a factor.

BUT TO HEAR them get upset at Michelle Obama makes us realize what some of them want is a society that is blind to color – one that pretends people who aren’t exactly like them do not exist.

So maybe the social enlightenment that Michelle Obama says makes her proud to be an American is not totally in place. There are still people who mentally are living in their own warped world and seem to think we’re supposed to live in it with them.

Michelle Obama is correct in being proud of the treatment her husband is getting these days from the American people. What we should be ashamed of are the people who have a problem with that fact.

EDITOR’S NOTES: Bill O’Reilly’s response on television to Michelle Obama can be found here (http://www.foxnews.com/story/0,2933,331428,00.html). Even those trying to defend Bill (http://nymag.com/daily/intel/2008/02/bill_oreilly_doesnt_want_to_ly.html) make him look bad.

One of the things about the Internet as a forum for communication that annoys me is its way of encouraging Triple-A’s (Another Anonymous Airhead) to give their opinions without having the guts to sign their names. Here is a perfect example of that phenomenon (http://www.mediabistro.com/bbs/cache/t37693_1.asp).

Texas is going to be the scene of ¡Tejano Wars!, as Barack Obama and Hillary R. Clinton spend the next two weeks fighting it out for the Hispanic vote for the Democratic nomination for president. The South Chicagoan (the Chicago Argus’ sister weblog) has a detailed account (http://southchicagoan.blogspot.com/) Thursday about how they’re trying to achieve that goal.
Posted by Gregory Tejeda at 12:10 AM