When this week is over, Mexico President Felipe Calderón Hinojosa is bound to have some unique memories of his first official visit to the United States.

He’s going to be able to have seen Harvard Yard and the United Nations. Calderón will have met with Los Angeles Mayor Antonio Villaraigosa (one of this country’s highest-ranking Hispanic politicos), and he’s also going to be able to get his picture taken with Hollywood celebrity-turned-“governator” Arnold Schwarzenegger.

AS FAR AS the public perception is concerned, his Chicago stopover scheduled for Tuesday has the potential to be the weak end of the Calderón U.S. tour.

To me at least, a meeting with Gov. Rod Blagojevich pales by comparison to the other pseudo-celebrities he will be meeting. You’d think we could at least dig up Oprah Winfrey to add some Chicago glamour to an official state visit.

Yet the Chicago appearance, if not as politically sexy as the other stops on his five-day visit, also has the potential to be the most important. 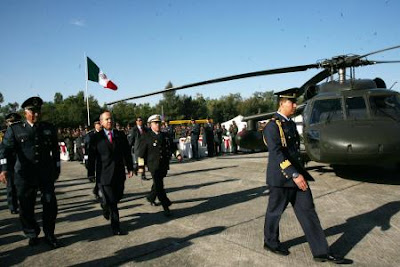 Calderón is going to get a chance to meet face to face here with that unique breed of Chicago’s ethnic soup – the Mexican-American, who accounts for roughly one of every six Chicagoans. (It is when combined with Puerto Ricans and other Latino ethnicities that Hispanics account for 26 percent of the city’s population).

THE PRESIDENT OF Mexico is going to attend a rally at Lawndale High School that officials expect to be attended by about 700 people, many of whom are the children of immigrants who make up the population of the Little Village neighborhood on the near Southwest Side.

Officially, Calderón says he is coming here this week to remind U.S. government officials that Mexican citizens who have emigrated to the United States have rights as human beings – rights which he believes are sometimes neglected by federal officials who cite national security as a reason to single out Mexican people.

Yet if that were his only concern, Calderón would have had his flight go directly from Mexico’s Federal District to the District of Columbia. He could have spent his time trying to influence the D.C. politicos and perhaps get a state dinner in his honor at the White House.

Instead, Calderón is bypassing Washington to see the actual countryside for his first official U.S. visit. By escaping the D.C. “Beltway,” he’ll get to meet up with people of Mexican descent scattered across the country.

WHEN ONE CONSIDERS that Chicago has had a sizable Mexican population since the end of World War I, there would be no way he could skip over, “La Ciudad Segunda” on his U.S. tour.

To those people who attend the rally, the event has a chance to be a life-long memory. Regardless of what one thinks of the government of Mexico, common decency implies that you show a certain amount of respect for a nation’s leader – similar to how some people think it is absolutely disrespectful to the United States of America to be overly critical of George W. Bush.

And to someone of Mexican descent who is struggling to comprehend a strange new language and customs while also working a crummy-paying job (or two), the notion that your motherland’s leader has not forgotten your plight can be a boost.

It is even an event of significance to people like myself who were born in Chicago and have to go back a couple of generations to find the immigrant presence in our family trees.

ALL TOO OFTEN in the past, there was an attitude among the Mexican population remaining in Mexico (usually the upper classes whose lives were so financially secure they had no reason to think of leaving) that the people fleeing to the United States were disloyal to their country.

While I see my two grandfathers as being courageous for leaving behind everything they ever knew in life to try to build a new life in a foreign land (the farthest I have ever strayed from Chicago was a five-month stint living in the District of Columbia), Mexicans of a certain generation would lambaste them as cowardly.

Hearing firsthand from Mexico’s leadership that we have not been forgotten is reassuring. It is nice to know that another piece of past ignorance is being put aside.

Personally, I want to hear what Calderón has to say, in part because I am enough of a government junkie to find the inner workings of Mexico’s version of Democracy to be intriguing. Calderón’s 2006 election was as controversial to Mexican citizens as George W. Bush’s 2000 election was to U.S. citizens.

BUT I ALSO am interested in seeing how U.S. officials respond to having Calderón rub the plight of Mexicans in the U.S. “in their faces,” so to speak. Will he get openly hostile reactions from some social conservatives who, “don’t want no Mexican” telling them what to do?

Will he get polite applause, then have his words forgotten once his return flight slips south of the Rio Bravo del Norte/Rio Grande? Or will someone heed his words and actually try to do something of significance toward immigration reform – other than building a concrete barrier along the southwestern U.S. border that will come to be graffiti-ed to the point that it will resemble the Berlin Wall of old.

There is one part of the Calderón U.S. tour that I wish I could be present for – the finale in Sacramento, Calif., where he will meet with Schwarzenegger at the governor’s California Statehouse office.

SCHWARZENEGGER, HIMSELF AN immigrant from Austria, is on record as favoring the U.S./Mexico border barrier along with tougher restrictions on Mexican emigration. Will he try to justify his views with Calderón? Or will the California first lady (Kennedy cousin Maria Shriver, an ‘Obama girl’ of sorts who disagrees with his choice of John McCain for president) manage to get Arnold to hold his tongue?

It is particularly interesting that Schwarzenegger is such a high-profile governor that he can get a foreign president to come to him, rather than having to link up with Calderón when the Mexico president visits Los Angeles.

I can’t imagine a Mexican president making a similar trip to Springfield, Ill., where the last Mexican official to visit the Illinois capital city was former Agriculture Secretary Francisco Labastida – and that was 10 years ago.

EVEN WITH BLAGOJEVICH’S bloated sense of self-importance, I can’t imagine our governor having the nerve to demand that foreign leaders come to his turf.

Of course, since Gov. Rod does not put in much time at his offices at the Statehouse in Springfield, Ill., or at the Thompson Center in Chicago, Calderón would have to make a trip to the Blagojevich residence in the Lincoln Square neighborhood.

You have to admit, watching a presidential motorcade try to wend its way through the streets of the one-time German ethnic enclave (which is slowly going upscale) in search of the gubernatorial bungalow would be an unforgettable site.

Calderón says his government is trying to crack down on drug trafficking taking place (http://www.chicagotribune.com/news/nationworld/chi-mexico-president-interview-feb07,1,3288667.story) between the two countries.

Mexican presidents traditionally visit the United States during their first year in office. But Calderón's U.S. tour was delayed due to floods that struck Mexico. You may not (http://www.thenation.com/doc/20071210/nino-martinez) have paid much attention, but it was as devastating to the morale of Mexico as Hurricane Katrina was to the U.S.

Calderón will use this site (http://www.presidencia.gob.mx/en/) to promote his visit, and other initiatives.
Posted by Gregory Tejeda at 12:00 AM