ELECTION DAZE: Who's the establishment guy?

I wish the candidates for president would make up their mind about which of them is the establishment choice and which one is the choice of a new generation (Oh wait, that’s Pepsi).

How else to explain the diatribe delivered by politically interested Chicago millionaire J.B. Pritzker (whose older sister, Penny, is Barack Obama’s finance chairwoman).

J.B. told WBBM-TV that, of course, his preferred candidate for president, Hillary R. Clinton, was going to lose in Illinois. Obama, Pritzker said, is “the Machine candidate,” whereas Hillary, “ran against the Machine.” The Clinton campaign, by pushing forward, is “taking on the Machine and what it stands for.”

With that many “Chicago machine” phrases tossed out there, you’d have thought he was a Republican.

Now it is true that the Cook County 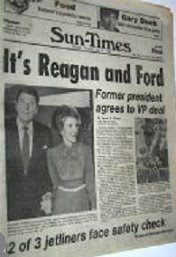 Democratic organization (in fact, the entire Illinois Democratic Party) slated Obama for U.S. president. What can one say? They chose to back the guy who lives in Chicago, rather than the lady who may be a Chicago native, but prefers to think of herself for political purposes as a Noo Yawker.

Besides, I thought the whole theme of the Hillary Clinton campaign was that she was the candidate of the Democratic Party establishment, whereas Obama was some snotty punk kid who was trying to cut in line ahead of her. Now her people are trying to make him out to be the establishment candidate?

All this really proves is that if talk is cheap, than political talk belongs in the bargain basement bin.

What other observations (serious analysis will have to wait until later this week, anybody who says they can give you something legitimate tonight is fibbing) can I offer on this Election Night?

GAFFES: Obama showed up at his polling place in the Hyde Park neighborhood, looking forward to using a touch-screen voter machine to officially record his vote for himself to be president. There was just one problem.

Elections officials didn’t have the proper equipment to allow Obama to use a touch screen. He had to settle for using a paper ballot to vote for himself. Obama took the disappointment better than Carol Moseley-Braun reacted two decades ago.

I was a reporter for the old City News Bureau of Chicago during the 1988 primary elections, and I remember being camped outside of the polling place in the South Shore neighborhood where Moseley-Braun (who at the time was running for Cook County recorder of deeds) said she was planning to vote at 7 a.m.

She didn’t show up until closer to 8 a.m., but it really didn’t matter. Someone screwed up, and no elections equipment was sent to the polling place. Nobody was able to vote. When Moseley-Braun found out she couldn’t vote right there and then, she got on a telephone and started yelling at elections officials downtown. “I can’t even vote for myself,” she snapped at an elections official.

“INVISIBLE INK?”: About 20 people who made a point of showing up early to their polling place in the far North Side’s 49th Ward wound up having to go back and re-cast their ballots.

It turns out the election judges who worked their polling places suffered from momentary brain cramp. All of the voters in question tried to use the device meant for someone using a touch-screen voting machine to mark their paper ballots.

Of course, using the wrong device meant that no votes were recorded on the ballot – a fact that was noted when election tally machines rejected the ballots? The problem is that election judges told voters that their ballots were marked up “in invisible ink.”

Chicago elections chief Langdon Neal told WTTW-TV that officials had managed to track down all the voters inconvenienced, and that he knew at least eight of them managed to return to the polls to cast their votes properly.

WASHINGTON-ESQUE: The figures still astound me – 95 to 4.

Those are the percentages that Obama and Clinton respectively took of the African-American vote in Illinois, according to exit polls used by WBBM-TV.

The last time I heard of any candidate in Chicago taking such an overwhelming share of the black vote literally was when Harold Washington won the mayoral elections of 1983 and 1987.

It’s rather ironic that when Obama first moved to Chicago in the mid-1980s, he picked this city because he had dreams of getting a job at City Hall as part of the Washington administration.

It didn’t happen, but now he has the potential to become an icon on the level of Washington. Who has the best name chant, “Har-old” or “Oh-bah-mah?”

I also heard the echoes of Harold in Obama's Election Night speech. His line "our time has come" reminded me a lot of Washington's "it's our turn" line.

DELUSIONS OF GRANDEUR: Somewhere out there in Illinois are just over 1,000 people who cast their primary election ballots for New Mexico Gov. Bill Richardson to be the Democratic party’s presidential nominee.

Are they just overly loyal, seriously delusional, or as clueless as those people in Palm Beach, Fla., in 2000 who say they didn’t realize they were supporting Pat Buchanan for president when they miss-marked their ballots?

CELEBRITY SLOP: Even “Entertainment Tonight” felt the political touch Tuesday, giving stories of Britney Spears’ alleged mental instability a rest for the day. The pop celebrity fluff program let us know that Obama has the support of actors Robert DeNiro and George Clooney, but Jack Nicholson is for Hillary.

Considering that Nicholson was the Joker in a superior version of “Batman” than the sequel Clooney starred in might put Hillary on top. But I can’t help but think that DeNiro’s characterization of a youthful Vito Corleone beats both.