Perhaps it is because I worked for two decades in the news business, but I could see the CNN anchor Thursday afternoon doing her best to suppress a laugh as she gave us the update on an explosion in Waukegan, Ill., that the network had reported live earlier in the day.

As it turns out, no one was killed in what officials say was a gas explosion that gutted several businesses and was felt by people as far as a block away. Eight people were taken to area hospitals for minor injuries.

THE POTENTIAL FOR humor came out of the fact that the initial image presented by the explosion was so incredibly disgusting. Firefighters and other emergency crews arriving at the scene found body parts strewn all about the street.

For a few seconds, officials surveying the scene saw the flesh-colored parts and feared they were going to be spending their next few hours picking through rubble while trying to resurrect the parts of people who just happened to be present at the wrong time.

But in what sounds like a bit from a “Marx Brothers” movie, the body parts turned out to be not quite what they appeared at first glance. Among the businesses gutted by the explosion were a hair salon and a clothing store – specifically, one that sold tuxedos. 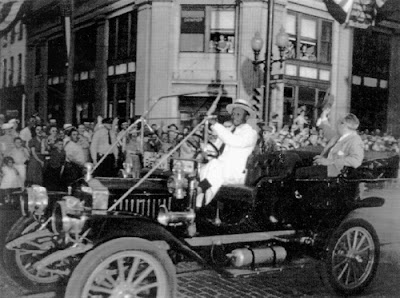 Had the body parts not come from mannequins, Waukegan, Ill., would no longer be remembered primarily as the birthplace of Jack Benny. Photograph provided by City of Waukegan.

The body parts in question belonged to the mannequins used in the store to display the tuxedoes. At least those mannequins ended their time on this planet while being well dressed. Except for the mannequin clad in the light blue tuxedo with a ruffled shirt and dark blue cummerbund. That one gets the shame of dying in a tacky high school prom outfit.

SOME PEOPLE ARE going to be repulsed at the notion that anyone could find humor in an explosion. But actually, it is the way reporter-types (and many law enforcement officials I have known) deal with the potential tragedy once it turns out there is no real carnage.

It’s not like anybody is making quips about Tinley Park, where police continue to look for the man who earlier this month killed five women and seriously wounded a sixth during a robbery attempt at a Lane Bryant women’s clothing store.

Nonetheless, I can appreciate the differing viewpoint that non-reporters take toward incidents. After all, a reporter (particularly one who focuses attention on crime and disasters) usually pops into the lives of people at their absolute low point.

It is why I can understand why reporters approached Gov. Rod Blagojevich when he attended a ceremony at Northern Illinois University, and then proceeded to ask him questions about issues other than the 21st Century version of the St. Valentine’s Day massacre that left five students dead and several others shot.

SEVERAL STUDENTS BOO-ED and heckled reporter types, which probably fed into the governor’s ego and makes him think all the more that the people of the state of Illinois love him (they really love him) and will forgive him for anything he does.

The simple fact is that Blagojevich may be implicated in a federal investigation of political corruption. He gives people so few chances to talk to him, that this occasion had to be used.

Besides, the world does not revolve around DeKalb, Ill., even though some students may wish it did. Blagojevich said he would push for state funds to pay for demolition of the hall where the shootings took place and construction of a new memorial. That story got reported as well as Blagojevich’s lame response to being “Public Official A.”

What else was notable this week in the world of the Chicago-area reporter types who try to follow in the footsteps of “The Front Page?”

SUN-TIMES DINGS TRIBUNE, WHOOPIE!!!: The Chicago Sun-Times went a tad overboard with its coverage Thursday of how Tribune Co. chief Sam Zell seriously wants to find some corporation to pay him big bucks for the right to put their name on the stadium used by the Chicago Cubs.

With a screaming headline reading, “It’s Trib vs. Chicago,” the newspaper made a big splash with stories and columns denouncing Zell for even daring to think of chang 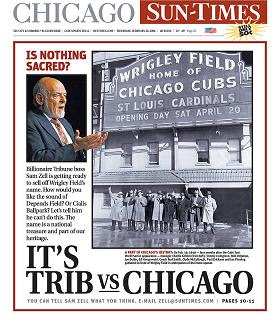 ing the name of Wrigley Field (which is named for the Wrigley family that used to own the team and still owns the chewing gum manufacturing company).

The newspaper also devoted ample space on their website to the comments of Cubs fans (many of whom read as though they forgot to take their medication) who want to get all worked up over this.

THE ONLY REASON the Sun-Times cares about this is that it is an excuse to beat up on the opposition newspaper. If anybody other than Tribune Co. owned the Cubs, the Sun-Times would take a more rational viewpoint on this issue.

The truth is that modern sports economics make all of Zell’s proposed moves (including more night games and concerts at the stadium) the norm. He is not asking for anything out of line with other professional sports teams.

If our government officials are going to be forced to deal with this issue (the state may wind up buying the stadium and paying for a major overhaul of its infrastructure), they are going to have to get over this silly notion that the Chicago Cubs are “holier than thou.” They’re just a baseball team, and a lousy one at that.

BLACK’S BLACK DAY: He was done in by videotape.

An appeals court panel in Chicago rejected the request of former Chicago Sun-Times chief Conrad Black to remain free while his appeals take place. Black will have to report to prison on Monday, or risk being labeled a fugitive from justice.

The court ruled that his conviction on an obstruction of justice charge on claims that he removed boxes of documents from his office in Toronto after a court had said they were not to be touched is so air tight there is no chance it will be overturned. They cited the security video used during Black’s trial that shows him hauling box after box after box out of the office.

So that puts Black in the same category as one-time Chicago Cubs idol Sammy Sosa as someone whose Chicago rep was forever damaged by incriminating video (remember the security camera that caught Sosa leaving a game early at the end of the 2004 season?)

Unlike Sosa, Black now has a 6 ½ year prison term to serve (provided he behaves himself while in prison, he’ll have to serve about 5 ½ years before being eligible for early release).

AND ON A FINAL NOTE: I’m still trying to figure out just what officials with the “Today” show thought they were accomplishing by having former Bolingbrook police officer Drew Peterson on their program.

Peterson, whose third wife is now officially a homicide and whose fourth wife is still missing (it has been four months now), didn’t say anything of interest during his show, and the perception most viewers picked up is that NBC will put anything on the air if they think it will help bring in ratings.

Finally!
A blog worth reading on forward until the end! :) I really admire the wording in this blog, quite precise to the details but I just might change one or two things, never-the-less, bravo on well choiced words mate.. p.s.>> Thanks for sharing, I actually picked up some knowledge on this one :)
-Have an amazing day!

Saving this to my reading list (you gotta love the new Safari feature on iOS 5!). Great post.... P.S. Happy Friday, everyone :)