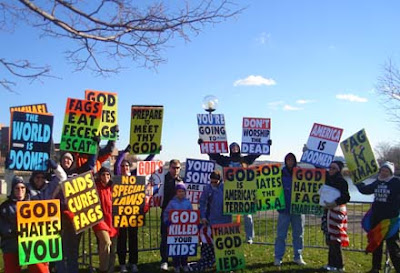 If past protests are any indication, there will be picket signs similar to these outside two funeral homes in the Chicago suburbs. And the people wielding them won't be the least bit bashful. Photograph provided by Westboro Baptist Church.

I want to start off by wishing my condolences to the families and other loved ones of Connie Woolfork and Sarah Szafranski.

Not only did each family lose a beloved relative in a gruesome, nationally publicized quintuple murder at a suburban Chicago shopping center, but on Saturday they are going to have to endure a ridiculously public ordeal that will cause them additional grief and shame.

Specifically, funeral services are being held today for both women, and the Rev. Fred Phelps is bringing his batch of Kansas goofballs affiliated with his Westboro Baptist Church to the Chicago suburbs to conduct their demented protest activities.

PHELPS IS ONE of those types of people who really are what is wrong with the United States of America these days – he thinks religion condones bigotry, and he has been put in a position of authority that gives him a reason to think he is morally superior and has the “God-given right” to treat others like dirt.

That is why in recent years he has gone out of his way to organize pickets at the funeral services of people who died in publicly prominent ways. Most of the picketed events are the funerals of soldiers killed in combat in Iraq. But now, Phelps will use the Woolfork and Szafranski services to try to gain more attention for his “holy war.”

Not that Phelps has given up on picketing deceased U.S. soldiers. He plans to protest at the Monday funeral service in Blue Island of Lt. David Schultz, a member of the 82nd Airborne Division who died last week in Iraq. Only then will Phelps and his followers leave the Chicago area.

What is his cause?

PHELPS WANTS TO believe the reason that people are dying is some sort of cosmic punishment. God does not like a multi-cultural society of tolerance that he sees as sympathetic to people he wants to demonize. So he’s allowing “Americans” to be killed as the country’s punishment

Phelps is the perfect example of a person who complains about “political correctness” because he can’t use words like “f----t” without appearing to be a bigot. He wants to go back to the days when a “f----t” was a “f----t” and those people just needed to take the abuse.

The reverend thinks that he is arousing the anger of people against gays. Actually, he’s just arousing the family members who will have their sad moment turned into a public spectacle by a publicity-seeking buffoon who is trying to cloak his bigotry in holy robes.

I don’t hesitate to call Phelps a bigot because a check of his primary web-site that lambastes homosexuality also has “sister” sites that tell us God also hates Canada, Ireland, Mexico and Sweden, in addition to Catholics.

IT IS GOOD that Illinois lawmakers a few years ago, largely in response to Phelps’ protests across the nation, imposed laws requiring protesters to keep their activities a set distance from the actual event.

They cannot legally interfere with the funeral services or peoples’ ability to get into and out of the event. Perhaps if they are lucky, the Woolfork and Szafranski families will be able to get through their funeral services without having to pay much attention to the Rev. Fred.

Phelps is really nothing more than a throwback to the past.

LET’S NOT FORGET that the segregationists of old used to cloak their racist views against African-American people by claiming that their ideas were “God’s word.” They were able to quote biblical passages that they interpreted as evidence that, “the Lord God himself” wanted the races to be kept separate.

Now, only the most buffoonish of white supremacists make that claim (try reading their diatribes about “mud people” who were God’s “mistaken creation”).

But before one thinks I am trying to lambast organized religion of the past as blatantly racist, I’m not. I’ve seen too many old civil rights protests of the 1960s where priests and nuns joined the marches to show their solidarity for the concept of integration. I’ve also heard enough religious people talk sincerely about racial equality to know that religion itself is not the problem.

It is the sorry way in which some people allow their twisted views about life to interpret religion in a blatantly un-Christian way.

THE ONLY DIFFERENCE between Phelps and some southern preachers of the past is that Phelps replaces African-American people with gay people. The 21st Century, in his mind, gives us a different group to wrongly demonize.

If I wanted, I could easily go see the Phelps protests, which are taking place near funeral homes in the suburbs of Oak Forest and Country Club Hills. (My parents actually live in a neighboring town, and I could combine reportorial duty with a family visit). But I think I’m going to skip it, and not just because my funeral clothes are in need of a dry cleaning.

I have already heard the rhetoric that Phelps likely will spew forth on Saturday.

I still remember a wintry January in 1994 in Springfield, Ill. A “preacher” walked up to a podium set up on the east steps of the Illinois capitol (the main entrance) and he proceeded to give his “sermon.” It is a spiel I will never forget.

THE CLERGYMAN THAT day asked God to, “strike the Earth with a plague to wipe out all the n-----s, f-----s and other perverts who take up space, so as to leave this planet and its natural resources free and available for decent, Christian people.”

That clergyman then put his hood on and took part along with his colleagues in a Ku Klux Klan rally that was meant to denounce the fact that people in this country these days honor the memory of Martin Luther King Jr. with a government-sanctioned holiday, rather than denounce him as some sort of “Communist agitator” and “pervert” like they used to.

The only difference between that clergyman’s sermon (I forget exactly what the Klan calls its clergy, other than to know – like everything else in Klan-speak – it starts with a “K”) and the Phelps talk is that Phelps doesn’t hide under a white hood.

EDITOR’S NOTES: The Topeka, Kan.-based Westboro Baptist Church (which Baptist officials say is not really Baptist) is the subject of these studies (http://www.baptistwatch.org/fredphelps.html) as to how un-Christian (http://www.adl.org/special_reports/wbc/default.asp) his beliefs truly are.

Some journalists also have done their work in seriously digging up information (http://www.motherjones.com/news/feature/1999/03/lauerman.html) about the Rev. Fred Phelps.

For those who want to believe that these resources are biased, check out this crude statement (http://www.godhatesfags.com/written/fliers/20080207_illinois-mall-shooting.pdf) released by Phelps to justify his actions on Saturday.
Posted by Gregory Tejeda at 12:02 AM

Great article as for me. It would be great to read more about this theme. Thank you for sharing that info.
The only thing I would like to see here is such photo or even two :)
Sexy Lady
Russian Escorts