Regardless of how their careers as professional baseball players turn out, two Chicago ballplayers will have the memories of what it is like to play for a champion.

Too bad it didn’t happen here in Chicago. 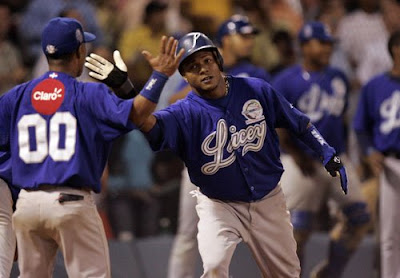 The Licey Tigers of the Dominican League won bragging rights as champions of Latin American baseball when they won the Caribbean Series Thursday. Photograph provided by SeriedelCaribe.com.

The Caribbean Series, the annual tourney between the champions of the Dominican and Venezuelan leagues and the Pacific League in Mexico, ended Thursday night when the Licey Tigers beat the Cibao City Eagles 8-2.

Licey finished the weeklong tournament with a 5-1 record, compared to the Cibao City record of 3-3. The Aragua Tigers of Venezuela and the Obregon City Yaquis of Mexico both finished behind the Dominican Republic teams in the tourney, with identical records of 2-4.

Two of the Licey pitchers have Chicago ties during the summer months. Oneli Pérez pitched last year for the Birmingham Barons of the Southern League (a Chicago White Sox affiliate), while his teammate, Carlos Marmol, was with the Iowa Cubs and has hopes of pitching some time this season with the Chicago version.

Here’s hoping Pérez can take the mindset of playing for a champion and apply it to his time in the White Sox organization. And if Marmol ever turns out to be a champion in the U.S., it will be with another team.

I ought to be thankful that the Yaquis (the team I was sort of pulling for in the tourney) didn’t totally humiliate themselves. After losing their first four games (by a combined score of 24-8), they managed to salvage their reputation by winning their final two games.

And on a final point, there is a significant reason baseball fans in the United States ought to be interested in the Caribbean Series. The end of the Latin American tournament means that the beginning of spring training for U.S. professional teams is only eight days away.