THE INK-STAINED WRETCH: Television too anxious to broadcast the "news" live 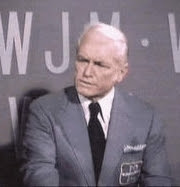 Once, when I was sitting in the press room at Chicago City Hall during a lull in the action, some of us reporter-types were half-watching a television set that was tuned to a local television station’s early afternoon newscast.

Two female anchors were engaging in some banter about some fluff subject (it might have been a cooking segment, I don’t remember) when one of my reporter counterparts made a statement that I still think of as a sound philosophy when trying to comprehend what goes through the collective mindset of television news shows.

“IT DOESN’T BOTHER me that they want to fill airtime with this stuff, but do they have to call it ‘news’?”

It's not news. Not really.

Too much of what appears on television news shows is content meant to amuse the viewer enough to keep him or her watching long enough to watch the commercials – assuming (that is) they aren’t TiVoing their way through them.

But even when television news shows are trying to come up with hard-hitting reporting, there is something about the stupid nature of news broadcasting that comes through – which is the reason I still read newspapers, even though too many geeks want to believe it is the television medium that sets the news agenda.

(The reality is that television and wire services all too often pick up on stories that newspapers report first – but a story that is ignored by television will not gain any ground in the public consciousness.)

A PERFECT EXAMPLE of television’s stupid nature came on Friday, when I made the mistake for about an hour during the afternoon of watching CNN.

Actually, I was flipping around my dial between CNN, CNN-Headline News, MSNBC and CLTV (ChicagoLand TeleVision, for those of you who are not fortunate enough to live in the Chicago area). As it turned out, for much of the hour, the same story was dominating all the stations.

The story was the emergency landing that an American Airlines flight from West Palm Beach, Fla., to Chicago was forced to make at Miami International Airport.

It appears there were signs of problems with the front landing gear, and the airline had the pilots abort their planned flight and set the plane down as quickly as possible.

Pilots were able to get the landing gear into position and it held. The landing itself was uneventful. For passengers, the problem became their personal inconvenience – they did not arrive at O’Hare International Airport until some time about 8 p.m., compared to the 3:50 p.m. scheduled arrival.

Now I fully understand why American Airlines was cautious. They preferred to reduce the odds that a deadly crash would occur. They handled the situation professionally, and emergency crews were ready in case something had gone wrong.

What I do not understand is why CNN, CNN-Headline, MSNBC and CLTV (I didn’t bother watching Fox News, although I expect they did the same thing) all felt the need to show the live video of the airplane going around and around and around, and finally making what appeared on screen as a routine landing.

FOR WHAT IT’S worth, my television was tuned to CLTV at the moment the airplane came down safely. It was the Tribune Co.’s Chicago-area cable news operation that allowed me to see that all the breathless “news” coverage resulted in “no” story.

That’s right. I said NO story.

At most, it should be worth a paragraph in Saturday newspapers, or perhaps a picture with a colorful cut-line of the rescue crews waiting in position just in case a crash had occurred.

That is what was really behind the LIVE NEWS COVERAGE that aired Friday afternoon. Each and every one of those stations wanted to be able to say that they were broadcasting live at the actual moment that a passenger jet hit the tarmac and exploded in flames, killing the 133 passengers and five crew members on board.

THEY WOULD HAVE gone into graphic detail picking through the gore and carnage, and we would have seen the “money shot” over and over and over for days on end.

The news professional in me understands that when word came that emergency crews were preparing themselves for a potential crash, the appropriate newsperson response is to get oneself in place to cover the story – if it happens.

Since it didn’t (thankfully, it didn’t), we should just write it off. Not every news tip pans out.

Instead, the television stations felt compelled to keep broadcasting a summary of the afternoon non-events that they spent valuable air time reporting in great detail.

SINCE WHAT COULD have been the story of the day (the one that knocked Hillary Clinton’s wise-aleck debate crack about Barack Obama’s Xerox policy out of the news cycle) fell through, CNN Headline felt the need to come up with another NON news event they had the potential to show live.

The briefs network (which employs some of the most beautiful women currently on television news) took us to the Greater Los Angeles area, where we got to see a police chase.

We got to watch from overhead as police pursued a nearly 30-year-old stolen vehicle after the driver refused to pull over. We even got to see news anchor Susan Hendricks interview a police authority who gave us blow-by-blow details about what exactly law enforcement officials were doing in the live video we were watching.

That incident ended after about 15 minutes, with a police officer using his car to give the offending driver’s vehicle a nudge, thereby bringing it to a stop. The arrest was then made on national television, with the police expert telling us that the driver would have been pursued (and caught) by a German Sheppard on the scene – had he tried to flee on foot.

THAT STORY IS worth even less than the emergency landing. At most, it is worth one paragraph in whichever suburban newspaper is relevant in that part of the Los Angeles area that a car thief was arrested following a brief chase. I can’t envision the Los Angeles Times (I hope not, anyway) being interested in writing a word about the incident.

It was at that point I turned off the television. I just couldn’t take any more potential gore being hyped into incidents of significance.

News is something that happens. It is NOT anticipation of what dramatic event could possibly happen if the odds break a certain way. That ought to be Lesson Number One taught in Journalism School (and it is times like this I am thankful I got a real education instead of majoring in journalism or communications).

A professional newsroom is ready to go with just about any circumstance. A quality newsroom would have been ready to start offering up hard coverage if people had been killed on injured in a landing, or had the police chase resulted in pedestrians or other spectators becoming caught in the crossfire. A quality newsroom would not have let itself get sucked into broadcasting morbid trivia in hopes that it became news.

SO WHILE A part of me is grateful for the outcomes of both incidents, I am more repulsed at the TV twinkies who thought the actual buildup to the non-news events was worthy of such breathless coverage.

And insofar as a Chicago angle in all this is concerned, we have area people who have relatives and friends on board American Flight 862 who are thankful their loved ones did not become part of a legitimate news story on Friday.

Of course, then we would have got to see some enterprising TV type think he was going to win his Emmy by asking someone if they would have been sad, had their cousin/girlfriend/whatever been m

Oh well. It’s only television. And as everybody’ favorite “ignorant slut” of TV news parody, Jane Curtin of the Weekend Update sketches, used to say, “That’s the news. Good night, and have a pleasant tomorrow.”

EDITOR’S NOTES: Friday’s emergency landing of an American Airlines jet may have caused “tense moments” (http://www.witntv.com/home/headlines/15883487.html), but no news resulted from the event.

At most, this (http://afp.google.com/article/ALeqM5hxa5Yo9zp-6C-Gq1Ju908i86aNZA) is what the emergency landing story is worth.

Too many news directors have visions of O.J. Simpson whenever police chases (http://abclocal.go.com/kabc/story?section=news/local&id=5975948) come to mind.
Posted by Gregory Tejeda at 12:00 AM