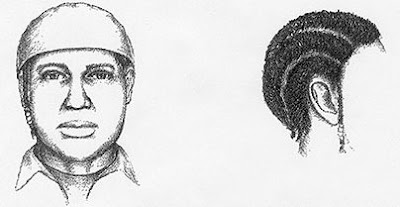 This is a preliminary sketch of the suspect in the recent quintuple murder at a suburban Chicago shopping center. Police indicate they may make more details public soon in hopes of catching him. Illustration provided by Tinley Park police department.

For fear of sounding ghoulish, I was glad when I first learned that the mass shooting that took place on the Northern Illinois University campus ended with the “perpetrator” turning the gun on himself.

I’m not pleased that someone is dead. But those people who are just so determined to say they live in a state that executes people are not going to get another criminal suspect to use in a pathetic attempt to arouse the anger of the public.

HAD THE INCIDENT that left five students dead and more than a dozen wounded (some critically) ended with a live suspect, it would have given the truly ghoulish people of our society yet another face to try to put on their argument that we need an active capital punishment statute in Illinois – rather than the system we have now where 11 people are on “Death Row,” but their sentences are indefinitely on hold due to the moratorium put in place by former Gov. George Ryan and maintained by Gov. Rod Blagojevich.

It’s bad enough that the death penalty fanatics are using the quintuple murder earlier this month at a Lane Bryant store in southwest suburban Tinley Park, distorting it to the point where it becomes an argument for “Homicide, in the name of Justice.”

Earlier this week, a DuPage County state representative introduced a measure asking Blagojevich to put an end to Illinois’ moratorium – which was one of the few times in recent years that an Illinois government official showed any guts on an issue.

For what it is worth, the resolution by state Rep. Dennis Reboletti, R-Elmhurst, is non-binding. Even if passed by the General Assembly, Blagojevich is under no legal obligation to pay it any mind. In fact, his aides say he has no intention of ending the death penalty moratorium.

BEFORE ANYONE STARTS sending me hostile messages telling me to get off my death penalty opposition kick, keep in mind that I deliberately held off a few days on this issue – just to see if the passage of time allowed my disgust with Reboletti’s resolution to cool.

The status quo of the death penalty in Illinois is this. In 2003, Ryan ended his term as governor by commuting the sentences of 157 death row inmates, using his authority as Illinois’ chief executive to change the sentences to life in prison without parole.

His action came after the General Assembly showed a lack of concern about evidence that death penalty procedures in use in Illinois were so flawed that the legitimacy of convictions was questionable.

RYAN DID NOT have the authority to abolish the death penalty outright (only the Legislature, with gubernatorial approval can do that), so people convicted of violent crimes continue to be sentenced to death – although the moratorium prevents an actual death date from being scheduled.

To Reboletti and those of his ilk, that is a contradiction that can only be resolved by resuming the procedures that in the 1990s saw one or two inmates per year (12 in all during the decade) actually put to death by lethal injection.

The real solution is to accept that there is very little likelihood our society will ever be able to come up with a capital crimes statute that is not biased against some segment of the population.

IT WOULD BE easy to dismiss Reboletti and his supporters as crackpots, but they are getting support from people of some authority. Reboletti’s resolution got coverage this week primarily because he has the backing of DuPage County State’s Attorney Joseph Birkett.

You remember Joe. He’s the Republican who ran unsuccessful statewide campaigns for attorney general and lieutenant governor. His political influence is strong enough that he’s bound to be tabbed to run for something in the future.

Considering how weak the Republican Party in Illinois is these days, I wouldn’t be surprised if he winds up being the GOP nominee for governor in 2010. Knowing that a past, and future, prominent politico is willing to use this issue is appalling.

It was Birkett who dragged the Tinley Park suffering into the mix when he told the Chicago Tribune, “with the recent slaughter of five innocent women in Tinley Park and similar cases, we, as a society, must ask ourselves, ‘Does a person who commits such a horrible and atrocious crime deserve to live, even in a penitentiary’?”

This is one issue where I can accept the Catholic Church’s stance. The church regards capital punishment as an anachronism from the days when the most dangerous of people could only be kept away from the general public by killing them.

The same church that opposes the notion of women terminating pregnancies on the grounds that the potential life is precious also realizes that the life of a person convicted of a violent crime is still a life, and just as precious.

If life is really that sacred (and I know the “anti-abortion” Birkett always tries to use the “pro-life” label to describe himself), then he should not be making such statements about people “not deserving” to live.

HE MAY BE a criminal prosecutor, but his comments reek too much of playing God.

The religious portion of me actually believes that the good lord, however you may conceive of him, has his own ways of dealing with those wayward souls who commit violent acts. I actually have faith that the soul of the person on the loose who killed the five women in Tinley Park will get his just punishment some day.

And that punishment will have nothing to do with what any judge imposes.

IN FACT, I have always thought the problem with our criminal justice system today lies with judges who think they are supposed to favor the prosecution and prosecutors who think their purpose is to rack up lengthy lists of convicted criminals – rather than protect the general public.

At least we won’t have to put up with the gunman in DeKalb being demonized in the same manner.

Now I can already hear the critics who (after using several choice obscenities) will tell me I am not taking the pain of the surviving families of the women who died in Tinley Park and the parents of the students killed at Northern Illinois University.

ACTUALLY, I AM. My mother lives just a few blocks from the suburban shopping center where the women died, and I have a stepbrother and cousins who attended the college in DeKalb. I have no problem identifying with those peoples’ thoughts.

But that doesn’t mean we give in to raw emotion. What makes us a superior society is that we keep our emotions in check, and we regard those moments when we give in to a “lynch mob” mentality as an embarrassment.

Making ridiculous statements that try to use the tragedy at the Brookside Marketplace to stir the wrath of the general public into an angry mob that demands vengeance by needle is nothing but sick.

EDITOR’S NOTES: Student news media (http://www.northernstar.info/) at the DeKalb campus are most likely to get close to the details of the bizarre shooting incident that took place Thursday.

Law enforcement officials have come up with more details about who they are looking for (http://www.chicagotribune.com/news/local/chi-tinley_park_killings_15feb15,1,4213055.story) in the quintuple slayings in Tinley Park.

Opposition to the death penalty (http://www.icadp.org/2007%20Annual%20Report.pdf) is on the rise in Illinois.
Posted by Gregory Tejeda at 12:00 AM