Friday was one of the rare days that I was thankful to no longer be a reporter working full-time in the news business. Had I been on somebody’s reportorial staff, I would have had to overdose on “stupid pills” in order to get through the day. Why?

Can you believe it? It is the middle of winter in a Great Lakes state, and we got hit with the slushy white stuff that is cold, wet and messy.

I’d sarcastically say we should “Alert the Media!,” but somebody apparently did. Every single television newscast I stumbled across on Friday hyped the Second City snowfall as though it was some sort of historic event.

WHEN I WAS a reporter, I hated weather stories. They annoy me even more than having to go to a pet store just prior to Easter Sunday to talk to someone about bunny rabbits. I’d even rather be at the zoo today and see whether or not the stinkin’ groundhog saw its shadow, than have to do a weather story.

The problem with weather stories is that they take a routine event and hype all the trivial details in order to get a fluffy story or two.

In my news judgment book, the reactions of people to inclement weather can be interesting – if that reaction is unique. Swimsuit sale increases in the middle of summer and slush and snowmen in winter are not terribly interesting.

People in places like California or Florida might not realize it, but a Chicago winter has its moments of beauty. Photograph by Peter J. Schulz, Illinois Bureau of Tourism.

MY OVERLY HARD-CORE news judgment tells me that weather stories become news when people start dying because of the temperature and other inclement conditions.

One of the biggest stories to hit Chicago during my time in the news business was in 1995 when summer temperatures became so excessively high that the number of people dying from heat exhaustion reached record levels.

While it comes before my time (I was barely more than one year old), the heavy snowfall that hit Chicago in January 1967 (nearly two feet in a 24-hour period) also qualifies.

That snowfall brought Chicago to a halt. Streets were deserted, cars were buried for days until all that snow melted, and some people were seriously trapped in their homes or at work.

NOTHING THAT HAPPENED on Friday even comes close to the traumatic events of those two weather occurrences that rank as major events in Chicago history.

In fact, I didn’t see any serious inconvenience on Friday, even though I know some parts of Cook County got as much as 11 inches of snow overnight and in the early morning.

For the record, my nephews and nieces did not have to go to school, which inconvenienced those who had to make last-minute arrangements for someone to watch the kids.

When I went out to pick up newspapers, I had to hit half a dozen stores before I could find a place that actually got its newspaper shipment for the day. Some stores got no papers, while others got lesser shipments and were already sold out by the time I got to them. All of the neighborhood news boxes had either Thursday papers still in them, or were empty.

BUT I FINALLY got my newspaper fix satisfied at a Walgreen’s pharmacy located about one mile from where I live.

I was able to drive my car on streets that had been cleaned. I did not encounter any accidents, and have not been able to find anyone who did.

Basically, my life Friday suffered minor inconveniences. As far as I can tell from watching the newscasts, I am solidly in the majority on those grounds. There were no major, life-altering instances taking place in Chicago.

So (to paraphrase the “immortal” Clara Peller), “Where’s the news?!?”

THIS IS THE Midwest. I expect it to snow, several times during the winter season. If I had a problem with it, I’d seriously consider moving to some place southern or southwestern (not Texas, though. Those people are crazy).

By going all out with their news coverage on Friday, Chicago’s television stations cheapened the event. They elevated a nothing news story to an event of significance by devoting so much time to it.

Then, they cheapened the value of a newscast’s lead story by wasting so much time on fluff.

Was it really the “Most Interesting Happening of the Day” that WBBM-TV found a man whose last name is “Snow,” and got him to talk about the proper way to drive one’s car, if your tires lose traction and you are stuck in the snow?

WGN-TV MADE SURE to show us the Chicago tradition of pulling out the summer lawn chairs and other patio furniture to demarcate a shoveled-clean parking space, and told us in near scare-tactic tones, “They’re running out of salt in west suburban Lombard!”

Couldn’t WLS-TV have come up with something better to lead their evening newscast than to interview a man who spent the day playing in the snow with his kids, getting him to say that Friday’s weather was, “the kind of winter we had when I was a kid.”

But the most ridiculous story (at least among those I actually saw) was a WBBM-TV report that made a story out of the fact that a Chicago mail carrier WAS ABLE TO DO HER JOB and deliver the mail – something I already knew to be true because my mail on Friday arrived about an hour earlier than usual.

I wish I could say this was just a case of brain-dead assignment editors in Chicago. But it goes farther.

I USUALLY TRY to catch a bit of CNN Headline News in mid-day to get something of a world overview of the news (and because, I must confess, I have something of an infatuation with Christi Paul, the broadcast’s mid-day anchor).

I thought for sure that I could turn to the worldwide newsgathering resources of Cable News Network to escape the vapidity of Chicago news. 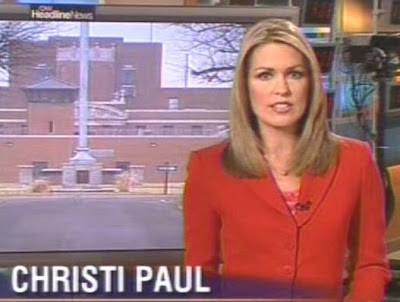 CNN Headline News' Christi Paul usually has better news sense than what was shown during Friday's coverage of the Chicago snowstorm.

Even Christi Paul was getting excited, reading copy that told of the heavy snowfall that hit Chicago.

WHAT BOTHERS ME is that the storm that hit Chicago late Thursday and early Friday was not a surprise. Meteorologists saw it coming, it hit just as hard as was expected and at the exact time that was expected. Then the storm moved on, as expected, where late Friday and early Saturday, it was smacking people around in places like New York, Boston and Washington.

News is supposed to be, in part, about surprise. There is none here.

Now some would argue that CNN is headquartered in Atlanta. Down in the Deep South, snowfall is rare. I understand why CNN a couple of weeks ago treated it as news when snow fell in the Atlanta suburbs one day.

But Christi, you’re from Ohio. You know that here in the real world, snow happens. You were the news anchor. You couldn’t have a quick chat to let someone know that the copy you were reading was ridiculous?

BESIDES, I REFUSE to believe that everybody who makes assignments in a television newsroom is some dumb cluck from the South. Somebody out there ought to know better than to get excited every time it snows.

In places like Chicago, we know (believe it or not) how to drive in the slushy stuff. It mostly involves making sure that one’s car is properly maintained, and allowing extra time to drive wherever it is one needs to go.

And if at all possible, we stay home. There’s no great trick to it.

But the realist in me knows that no one in a newsroom is going to pay attention to my rant. Fluff weather stories are easy to report and offend no one, unless you report that the reason streets were not promptly cleaned was because someone on a municipal road crew got drunk. Actually, that would be news!

SO I’M JUST going to have to get a grip on my senses and wait out the winter, knowing that warmer weather is ahead. Pretty soon, it will be summer, and I’ll be watching weather stories focusing on such “hard hitting” topics as bikini sales being on the rise.

Come to think of it, that story wouldn’t be so bad.

EDITOR’S NOTES: The one newsworthy fact related to Chicago’s early Friday snowfall was that hundreds of flights at O’Hare International Airport were thrown out of whack. (http://www.upi.com/NewsTrack/Top_News/2008/02/01/powerful_winter_storm_socks_us_canada/5513/) Airports across the country were impacted. But coverage on our local television newscasts focused on people shoveling cars out of snow and kids building snowmen.

This (http://www.islandnet.com/~see/weather/events/chisnow1967.htm) is what a truly newsworthy snowstorm in Chicago looks like.