“Obama me está hablando a mi.”

That is the phrase Democratic presidential hopeful Barack Obama wants to have flowing from the lips of every person of Hispanic ethnic origin in Texas and the rest of the United States by the end of spring.

IT TRANSLATES TO, “Obama is speaking to me,” and it is the key phrase that is repeated three times in a new campaign broadcast spot that is airing on Spanish-language radio stations across Texas, where Barack hopes he can motivate the Tejano population of the Lone Star State in ways that he has failed to get the support of Latinos elsewhere in the United States.

On the one hand, it is good to see Obama take seriously his problem in letting Hispanic people know he really is sympathetic to their concerns. But he’s going to have to do better than just putting out a radio spot or two in the weeks prior to the March 4 Texas primary.

His real chance to sway the Latino voters of Texas – the only remaining state with a significant Latino population to have an upcoming primary election – is going to be the Hispanic issues debate scheduled for a week from Thursday.

This image, used by Obama supporters in San Antonio, is potentially dangerous for a candidate who w 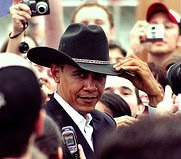 ants the Hispanic vote. One wrong remark about the Alamo (which remains a sore spot for many Mexican-Americans), and Barack will make Hillary’s day by giving her the Latino vote for sure. Campaigning in Texas means Obama will have to dig up that Stetson. Illustration and photograph both provided by Texans for Obama.

It could be Obama’s last chance to put an end to the Latino trend – Hispanic people largely support Hillary R. Clinton because they already know her and Barack Obama has not done much to date to make Latinos think he is worth taking the time to get to know.

THE ONLY STATE thus far where Obama was able to take a majority of the Hispanic vote was his home state of Illinois. Even here, he barely (52 percent) won the support of Latinos overall, while losing in wards controlled by aldermen Ed Burke and Dick Mell. He lost those wards with growing Hispanic populations even though the aldermen publicly backed Obama.

People who are “simpático a Español” just aren’t swooning for Barack the way the Youth of America are. Obama would like to think his commercials will introduce him to Tejanos.

He could use their support in slashing back on the number of presidential delegates Clinton gets from the Texas primary, as the two are still running even in the delegate count. Even though Obama has been winning a streak of primaries in recent days, Hillary can’t be counted out because she got the big delegate counts in New York and California, and could take Texas too.

The only big state Obama has won thus far is right here in Illinois, which sadly enough is dwarfed by California, and still topped by the other two states. He’s not winning in the right places to put the Clinton campaign down for the count.

IT’S ALMOST LIKE the 2000 general election, where Al Gore won the popular vote, but George W. Bush won the right to live in the White House because he won the electors.

So all across Texas in the next few weeks, people in places like Austin, Houston, San Antonio and Dallas and down near the border where the United States and Mexico blend into one multicultural region, their airwaves will be hearing a condensed version of the Obama story – the one the rest of us read in full if we bothered to buy or borrow a copy of, “Dreams from My Father.”

But the debate to be held Feb. 21 in Austin on the University of Texas campus (Jenna Bush’s alma mater) is more important.

It is an event that has significance to more people than just the Texas Legislature community that the late columnist Molly Ivins used to think of as a collection of all of Texas’ “village idiots.” Hispanic people across the United States will be paying attention to Austin that night – even those of us living in states where we already have cast our ballots.

MANY HISPANIC PEOPLE are going to be looking for THE moment where Obama slips up, if only to confirm our collective judgment that he is just a kid politico (a ‘politicito,’ in Spanglish?) and that “we” were right all along in backing the Hillary R. Clinton machine.

For those of us Latinos who actually cast ballots for Barack, we’ll be hoping for a moment where he slams Hillary down and we can gloat to our elders that they should have given Obama some attention early on. Our “padres y madres” and maybe our “Tio” Carlos will flip us a nasty look that implies “shut up,” but deep down they’ll know we’re right – so they won’t actually say it.

And for the roughly 26 percent of the Texas electorate that is Hispanic, the debate could be the moment that persuades them to join Illinois as the only state where Latinos preferred Obama. Taking the Latino vote the rest of the way through the primary season, when combined with his existing support from young voters, intellectuals and the African American population, could be what helps Obama stop the presidential nomination from being decided by the party bigwigs (officially known as, “the super delegates.”)

For Clinton, this debate could be her chance to cement her ties to Latinos. Any show of good faith that she has not forgotten us (even though her Mexican-American campaign chief recently had to take the blame and be fired for Hillary’s recent campaign failures) could be what ensures a majority of Latinos stay with her, and that the presidential primary remains a close one all the way to the Democratic National Convention this summer in Denver.

THIS IS NOT the first Hispanic oriented debate of the primary season. But the others were held so early in the process (does anyone care anymore about how people in Las Vegas voted?) that anything said back then hardly seems relevant.

I also still remember the first Hispanic debate where organizers went out of their way to provide interpreters for each candidate. That hurt New Mexico Gov. Bill Richardson (whose childhood was spent living in Mexico), who could have answered the questions directly in Spanish. Instead, questions asked by a Spanish-speaking moderator were translated into English for Richardson to answer “en Inglés” and have translated back into Spanish for the Spanish-speaking viewing audience.

Here’s hoping Univision officials have figured out a way to get around not giving any one candidate a lingual advantage, even though my understanding is that both Obama and Clinton have a rudimentary knowledge of the Spanish language. Obama’s language skills are good enough that he occasionally gives the Senate Democratic Spanish-language response to President Bush’s regular radio addresses.

These other Hispanic debates were confined to Spanish language television.

THIS TIME AROUND, CNN is getting into the act, which could be a sign that Anglo television news is catching on to the fact that the Hispanic population is an electoral force of some significance. (Or maybe they just want to sell us new HD televisions, now that our conventional TV sets will become worthless next year?)

CNN and its overseas operation, CNN International, will broadcast the event live and then repeat it again (likely in the middle of the night and in the early morning) for those people who didn’t get their fill the first time.

Only after the event is over will Univision affiliates across the country (in Chicago, that’s WGBO-TV, Ch. 66) broadcast the event.

I want to compare the ratings of the two broadcasts. How many people will decide to wait until the latter broadcast “en Español?” A Spanish-language newsperson is going to be more likely to catch the subtle nuances relevant to Latinos that an English language broadcaster might just totally miss.

PERSONALLY, I’LL TRY to watch both. That’s a lot of Hillary and Barack to have to endure in one evening.

But the event has the potential to be like ESPN’s broadcasts of international soccer tournaments. Anyone who knows anything about soccer knows that ESPN should stick to football and NASCAR and poker tournaments because Univision and Telemundo broadcasts make the English versions seem so dull and uninformed.

Will CNN do the same for Latino political empowerment?

EDITOR’S NOTES: Barack Obama’s broadcast spots “en Español” can be heard either on radio stations across the Lone Star State, or on the Internet, if you don’t feel like taking a (http://obama.3cdn.net/a34e1ee2e966917261_bjm6bwuky.mp3) trip to Texas.

Obama in the past has been used by Democrats to respond in Spanish to President Bush’s (http://blogs.suntimes.com/sweet/2006/02/_el_senador_obama_in_spanish_v.html) regular radio addresses.

Is Barack Obama’s comprehension of the Spanish language as weak as President Bush’s? This commentator (http://adage.com/bigtent/post?article_id=123134) thinks so.
Posted by Gregory Tejeda at 12:00 AM