I want to believe the death of the Chicago Defender as a daily newspaper is a good thing. 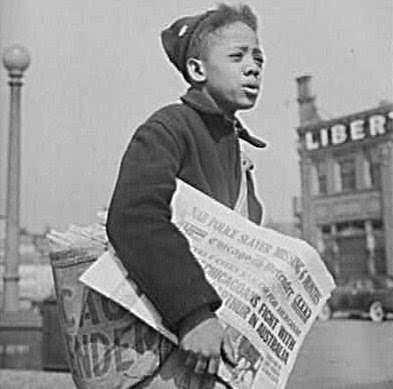 This newsboy hawks the Defender back in the newspaper's glory days. Photograph provided by the Library of Congress collection.

Now that it is reverting back to a weekly publishing schedule (on Wednesdays), the potential exists for a thicker newspaper, one that has longer, more in-depth stories than the current product and whose reporters truly dig into the collective lives of Chicago’s African-American community.

It would be a shame if the shift to a lesser publishing schedule allows the newspaper to dwindle down to insignificance. If that turns out to be the case, then we have to debate whether we would be better off if the newspaper would just die.

The Defender dates back to 1905, but it has only been a daily newspaper since 1956. At its peak, it published Monday through Thursday, and had a weekend edition that came out on Friday. In recent years, the newspaper cut costs by reducing itself to editions on Monday, Wednesday, Thursday and weekends.

The newspaper’s editors say they expect the new Defender to be a more substantial paper that could run between 48 and 60 pages, compared to papers like the one published this week Wednesday, which only ran 28 pages and only had seven staff-written stories in the entire paper (four of which were written by the same reporter – Wendell Hutson).

THE REST OF the newspaper that day was filled with syndicated junk produced by the Associated Press (Ugh!) and the National Newspaper Publishers Association.

The Negro press of old used to play a significant role in holding together the African-American community in this country. At a time when the white press diminished (if not outright ignored) the contributions of black people, it was newspapers like the Defender that gave black people a sense that their accomplishments actually meant something.

It also was the black press that for many years agitated for the need to end the Jim Crow policies of segregation that split our nation in two.

To this day, the Defender still pushes for racial equality. The top two items in the Defender platform are, “Prejudice and racism in all of its forms must be eliminated and destroyed,” and “Racial profiling and police brutality must be removed from police practices.”

THE THING IS, the Defender may not have been exaggerating when it made that claim. The newspaper used to have a national edition that circulated across the southern United States. Black people in segregated communities were able to read the paper and see the image of a better life in the north, particularly in the Second City.

The Defender was an integral part in inspiring the “Great Migration,” by which southern blacks came up north on the Illinois Central railroad, boosting Chicago’s black population from about 40,000 people just before World War I to about 1 million by 1950.

The newspaper went out of its way to detail the evils of segregation, particularly the ways in which lynch mobs were not a rare southern practice. It also was the Defender’s sportswriters who were among the leaders in putting the pressure on Major League Baseball to integrate itself – a move that finally occurred in 1947 when Jackie Robinson joined the Brooklyn Dodgers.

But that recitation of fact does not do the newspaper justice. One has to read the power of the prose that ran in the Defender back in its glory days. One of my favorite books is a copy I own of “Langston Hughes and the Chicago Defender,” in which several of the Harlem writer’s columns (his critics 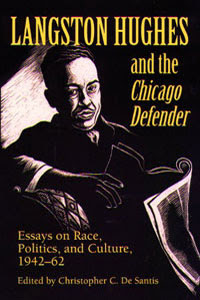 slandered him as the ‘poet low-rate’) for the Chicago-based newspaper are collected.

The graphic details of segregation and the humiliations that black people had to endure as just a routine part of their lives makes it clear why the African-American population gets worked up over so many slights that white people would prefer to think of as petty.

ONE HUGHES COLUMN particularly catches my attention. On Sept. 18, 1943, he wrote about the disgust black people felt because of the difference in treatment Southern white people applied to them as opposed to dark-skinned Latinos.

He tells the story of a woman who was denied food service on a train, once it ventured south of the Mason-Dixon line into Virginia, although stewards admitted they could have served her had she been of a Hispanic ethnic background.

“How dare you refuse to serve me? How dare you ask me if I am Spanish? Spaniards may be served in this diner, may they? But not an American citizen buying war bonds and paying taxes and sending relatives to fight in Europe for Democracy!,” Hughes quotes the woman as screaming at train stewards. I can picture the scene in my mind, filled with emotion. It is a clear anecdote as to why black people of a certain age might not view Latinos as allies.

The Defender of recent decades has petered out into a neighborhood paper. Its circulation area is select black neighborhoods on the South and West sides, along with suburban towns south of Chicago that in the past decade have developed significant African-American populations.

Now there’s nothing wrong with neighborhood papers. Some of them are well written and do a good job of digging up stories about their tiny communities that might otherwise be overlooked.

IN SOME WAYS, the Defender is no worse (or skimpy) a newspaper than a publication like the Marion Daily Republican. The paper in that Southern Illinois city can easily be just as small and as overloaded with wire service copy as the Defender on any given day.

Both newspapers employ tiny staffs filled with young kid reporters who are willing to work for a year or two at low pay, before moving on to a better paying, more ambitious job.

So long as that is the situation with the Defender, I will be skeptical that any change in format will boost the paper’s quality.

The old weekly Defender employed some top-notch talent and had ambition to try to make the paper the best it could possibly be. The modern Defender is looking for ways to cut costs, and paying talented writers what they’re worth is not in their mindset. In fact, it may very well be counter to everything they are planning to do.

There’s also the problem in that the new Defender may want to think it is the voice of Chicago African-Americans. But the Chicago Sun-Times, in many ways, has replaced the Defender in that role.

THE SUN-TIMES IS the Chicago metropolitan paper with a significant black readership, much more than the Tribune – which prefers to focus on communities with certain higher economic standards where black people are scarcely found.

I have always thought the Sun-Times’ future (assuming its owners don’t just give up and accept death) is to accept the notion that it is no longer a major metropolitan newspaper, and is instead a local paper – albeit one with big ambitions and a glorious history of its own.

Its local community would be the city of Chicago proper. It could be the paper that roots around and “owns” the readership of people who want to know about Chicago itself.

Surrendering coverage of the Chicago suburbs to the small daily and weekly newspapers the company has purchased in recent years is a sensible and practical move.

IT COULD TURN OUT that one of the biggest questions confronting Chicago journalism in the next few years is whether both the Sun-Times and Defender can survive. Or will the success of one paper mean the death of the other?

EDITOR’S NOTES: The Chicago Defender’s shift to a weekly publishing schedule is explained for newspaper industry professionals (http://www.editorandpublisher.com/eandp/departments/ad_circ/article_display.jsp?vnu_content_id=1003705058) and for upper-income Chicagoans (http://www.chicagotribune.com/business/chi-thu-chicago-defender-weekly-rosenthal-0131jan3,0,2584838.story).

I actually first learned about the shift from Sun-Times columnist Stella Foster (http://www.suntimes.com/news/foster/764198,CST-NWS-stella29.article), which is the first time Stella has ever broken a story I was interested in. In accordance with long-standing newspaper tradition (by which news about a publication’s business is most thoroughly reported in competing newspapers), the Defender itself has written nothing about the change.

The Encyclopedia of Chicago (http://www.encyclopedia.chicagohistory.org/pages/248.html) and Encyclopaedia Britannica (http://www.britannica.com/eb/article-9002511/Chicago-Defender) both have entries detailing the significance of the Chicago Defender, while the city commemorates the importance (http://www.ci.chi.il.us/Landmarks/D/Defender.html) of the Defender’s long-time Bronzeville neighborhood headquarters.

The Defender went all-out with its coverage the day in 1948 that President Truman officially de-segregated the U.S. military. Photograph provided by the Library of Congress collection. 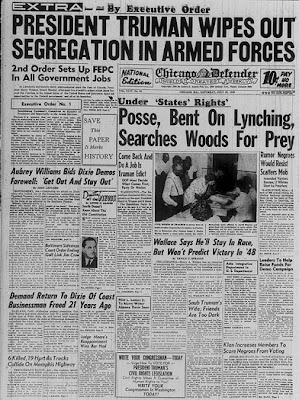