No GOP "light" at the end of the political tunnel 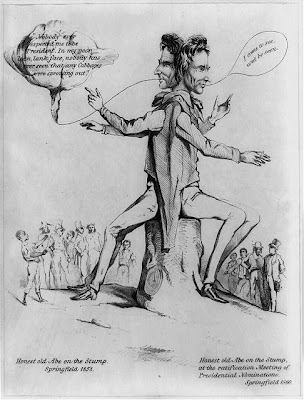 The Illinois Republican Party is nowhere near the significance it held back when it was literally the "Party of Abraham Lincoln." Heck, it's not even the same party that it was back in the days of Jim Edgar. Illustrations provided by Library of Congress collection (above) and State of Illinois.

One of my favorite pieces of political memorabilia is a photograph of the capitol building in Springfield, Ill. Taken in the final decade of the 19th century (Second and Capital streets were still unpaved dirt roads), the photograph hangs on the wall over my desk as I write this.

What makes the item unique is that the photograph is in a frame with a mat that is autographed by the six government officials who were Illinois’ elected constitutional officers.

“Jim Edgar,” “Bob Kustra,” “George H. Ryan,” “Jim Ryan,” “Loleta Didrickson” and “Judy Baar Topinka.” All Republicans. I picked up this particular item back in 1995 when the Republican Party in Illinois was at a peak and controlled just about everything in Illinois state government.

NOW, WE LOOK to the present.

Republicans in Illinois this week chose a candidate to run for U.S. Senate who is, at most, a fringe dreamer who on his first day of general election campaigning had to stoop to the level of dredging up illegal immigration as an issue. They are on the verge of nominating a presidential candidate who irritates a prominent portion of the GOP voter base, which will hurt the chances of Republican candidates running for lower-level offices.

The Republicans’ best bet of winning an office of significance this year may very well be the Cook County state’s attorney’s race – and then only if anti-Hispanic prejudice overcomes the common sense of Democratic voters who will be asked to vote for a two-decade prosecutorial professional to be the county’s chief attorney instead of a trash-talking politico who lost two years ago to county board President Todd Stroger.

Many political observers would look to another piece of memorabilia hanging over my desk (a framed photograph of myself interviewing then-Illinois Secretary of State George Ryan at the Illinois State Fairgrounds) and say he’s the man to blame.

But I have always believed that George Ryan and his corruption trial is NOT the reason the Republican Party declined in Illinois. He is merely the evidence of how far it had already fallen, and the party’s inability to get beyond Ryan is the proof that Republicans are not going to be enjoying a resurgence in Illinois anytime soon.

The population trends in Illinois that saw the suburbs of Chicago become the dominant region of the state (about 45 percent of Illinois’ population lives in a suburb of Chicago, compared to about 23 percent in the city proper and the remaining third in rural Illinois) initially benefited the GOP.

REPUBLICANS HISTORICALLY HAD controlled the political organizations that existed in the suburban areas, and during the mid-1990s they converted the growing suburban population into GOP votes.

The 1994 general elections that saw Newt Gingrich rise to power in Congress also saw the Illinois GOP take control of the entire General Assembly and all six state constitutional offices. For a two-year period, Republicans ran everything and forced their own partisan agenda down the throats of Chicago and Democrats. During that era, the most prominent Democrat in state politics was former Chicago Mayor Michael Bilandic, who was in the midst of a two-year stint as chief justice of the Illinois Supreme Court.

It was the first time since 1956 that Republicans (then in the midst of the Eisenhower era) controlled everything in Illinois politics.

But in what must be a historic coincidence, both Republican stints lasted eight years. Democrats made political resurgences in both 1964 and 2002.

THE FORMER CASE was hurt by the candidacy of Barry Goldwater for president, which scared off many would-be GOP voters and gave Democrat candidates a boost. In the more recent case, the population shifts that initially helped Republicans eventually came to favor the Democrats.

Many of those new suburban residents came from Chicago or from other urban areas around the country, and they were not wedded to Illinois politicos. Many considered themselves urban in nature, and ultimately came to identify themselves as being residents of the Chicago area, rather than Illinois. The long-time Republican bastion of DuPage County, Ill., on Tuesday saw 54 percent of primary election voters choose “Democrat” ballots instead of “Republican” ones.

This shift has caused remaining Republicans to identify more strongly with the rural regions of the state that lie beyond Chicago and its suburbs. Population trends show that region is (at is most) a third of the state’s population, and particularly when one gets into Southern Illinois, it is shrinking.

That is what differentiates Illinois from a place like Indiana, where Indianapolis is nowhere near as dominant over the state as Chicago is here. It also makes Illinois different from southern states with a distinct rural flavor where candidates who make appeals to a rural mentality are solidly in the majority.

FOR WHAT IT is worth, the Illinois Republican Party of today is a political party that favors rural interests in an urban state. George Ryan didn’t kill the Republican Party. Rural residents who want to live their lives in isolation from Chicago and other urban areas are doing their damage. The fact that they have solid control of the party’s apparatus is what prevents there from being any sign of light at the end of the tunnel.

How else could a political party nominate somebody like Steve Sauerberg to run for a U.S. Senate seat against a high-ranking Senate incumbent like Richard Durbin? Sauerberg’s first day of campaigning after the primary elections focused on illegal immigration and claims that Durbin’s policies were allowing dangerous people to slip into the country undetected.

That despite the fact that urban residents either are sympathetic to the concerns of the people who are in this country without papers, or are more preoccupied with issues such as the declining economy or bringing a satisfactory end to the U.S. military presence in Iraq and Afghanistan.

Only somebody who’s completely oriented toward rural Illinois could think this is the first attack he ought to be making at his opponent with the well-funded campaign. At this rate, Durbin is well on his way to achieving what Charles Percy and Alan Dixon failed to gain and what Paul Simon didn’t even try for – a third six-year term in the United States Senate.

BETWEEN SAUERBERG AND John McCain (whose presidential candidacy can’t even unite the factions of the GOP), I can easily see the top two Republicans on the ballot dragging down their party’s candidates up and down the ticket.

That will hurt what otherwise could be the respectable chance that Cook County Board commissioner Tony Peraica could succeed in his bid to be the first Republican state’s attorney in Chicago since Jack O’Malley lost his re-election bid in 1996.

Peraica ran unopposed, so he didn’t have to expend money or energy on a primary campaign, compared to his Democratic opponent, Anita Alvarez, who had to beat off five men to gain the nomination for the Nov. 4 election.

Because there were five other candidates, Alvarez won with only 26 percent support from those people who took a Democrat ballot on Election Day this week. Three of every four Democrats wanted somebody else – and her margin of victory over second place finishers Tom Allen (a Chicago alderman) was not quite 10,000 votes.

SHE DOESN’T HAVE a mandate of support from the people, and we know from experience Peraica is not the bashful type when it comes to using forceful campaigning to try to take down an opponent (remember his ‘sore loser’ behavior in the days after the 2006 Cook County president election?). He could exploit her lack of solid support to win in November.

What makes this Illinois Republican decline pathetic (aside from the fact that it takes place in the state that produced Abraham Lincoln and Ronald Reagan) is that it comes at a time when Democrats are hurting themselves.

Federal investigations into Antoin Rezko’s lobbyist activities are more likely to hurt Gov. Rod Blagojevich than Barack Obama, and the schizophrenic political activities that have occurred at the Statehouse in Springfield (particularly the lengthy delays in resolving a mass transit funding problem) have a lot of people looking everywhere else for an alternative to Democratic control of state government.

THE REPUBLICANS IN our state are incapable of providing that alternative.

Ultimately, the solution to the problem is going to have to be a political party that tries to moderate itself on the social issues to bring itself more in line with typical Illinoisans.

The current Illinois Republican Party is in line with the thoughts of people who live in places like Quincy, Effingham or Peoria. What plays in the latter city, however, is not what plays in places like Naperville or Orland Park – which are the modern-day residences of the typical Illinoisan. It’s no wonder a candidate like Mike Huckabee is irrelevant (only 16 percent of Tuesday’s GOP vote) in Illinois.

And one of these days, the party is just going to have to do something about establishing a relevant branch in the city of Chicago proper.

THE PARTY BOOSTED its number of voters in Chicago Tuesday, compared to the presidential primary four years ago, by nearly 50 percent (49.79 percent, to be exact). But even then, there were only 41,535 people in Chicago who chose to vote for candidates of the “Party of Lincoln.”

The days when it was cute that the Illinois Republican Party could hold its state convention at Assembly Hall in Urbana and pack the place, while reserving just a half-dozen seats in an isolated corner of the arena for the Chicago Republican Party (which really happened in 1996), just don’t cut it anymore.

EDITOR’S NOTES: The face (http://www.sauerbergforussenate.com/default.aspx) of the Illinois Republicans for this year belongs to a family physician from Lombard who takes pride in never having held political office before. I’ll leave it up to you to decide whether he offers a better face than 2004’s top-of-the-Illinois ticket in Alan Keyes.

The Illinois Republican Party may not have any officials in state government these days, but they do put together an entertaining attack (http://www.b3site.org/) on Gov. Rod Blagojevich.

On April 18, 1927, William Hale “Big Bill” Thompson gave this inaugural address (http://www.chipublib.org/004chicago/mayors/speeches/thompson27.html) to start off his term as mayor of Chicago. That is the last time, to date, that a Republican has given such a speech.
Posted by Gregory Tejeda at 12:00 AM