A part of me has a certain respect for the people who actually decide to run for political office, in part because of the dedication it takes on someone’s part to subject their lives to public scrutiny and allow “the people’s business” to take over their very existence.

“The people’s business” – that’s the phrase I have heard used semi-jokingly when political people refer to their work, and it is true. The decisions they make affect the regulations that confront our daily lives and how much tax is added to the price of the objects we buy.

PEOPLE WHO GET elected to a city council or state legislature post have to succumb to the minutia of government policy and accept that someone (sometimes me) is going to find fault with whatever they do, regardless of what they do.

So I’ll have to admit that I gained respect for Tim Baldermann, a Republican candidate for Congress from Illinois’ 11th congressional district, when he decided now that he did not want to proceed with plans to run for the federal post in Washington.

When he announced his decision last week, Baldermann said he was only now realizing how time-consuming it would be to run a serious campaign that might actually have a shot at winning the congressional seat, which represents an area stretching from the outermost southern suburbs of the Chicago area down to Bloomington – a combination suburban and rural Illinois district with many conflicting interests and opportunities to upset people. 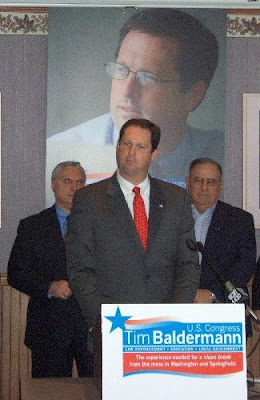 I wonder what becomes of that great big headshot banner? Photograph provided by Baldermann for Congress.

He also came to realize the expense of political campaigns. Although he managed to raise about $203,000 to spend on his primary election victory over two no-name politicos, having any chance to defeat state Sen. Debbie D. Halvorson, D-Crete, would have required a financial commitment he was not willing to make.

HOW TIME-CONSUMING can it be if you don’t have great personal wealth to pay the bills for a modern-day campaign?

The late Sen. Paul Simon of Illinois used to say he had to spend a part of every single day he was in federal office (12 years in the U.S. Senate, 10 years in the U.S. House of Representatives) making telephone calls intended to solicit donations so that he could have the funding necessary to run respectable re-election campaigns.

He hated doing it, but the drive to have a positive influence on public policy was so strong in Simon that he made the calls and got the cash contributions so he could keep going back to Washington to do, “the people’s business.”

Someone who is honest enough to admit publicly he doesn’t want to make the calls and whose drive to be a part of the legislative process isn’t strong enough to undergo the ordeal deserves our respect.

ILLINOIS REPUBLICAN CHAIRMAN Andrew McKenna expressed similar sentiments, saying in a statement released Friday that, “running for Congress is a difficult job that requires the full commitment from a candidate and his family.”

Not all Republican officials feel that way. Some are upset.

The congressional seat in question is held by retiring Rep. Jerry Weller, R-Ill., whose actions in Congress have caused enough of a public outcry that political observers think Democrat Halvorson is the favorite to win the Nov. 4 election.

They wish Baldermann had decided before the Republican primary election earlier this month to get out of the race. They would have rather had a candidate with the legitimacy of being chosen by GOP primary voters, rather than someone who will be lambasted by Halvorson and by Green Party nominee Jason Wallace as an illegitimately chosen flunky indebted to party hacks rather than, “the people.” 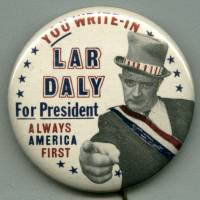 no more legitimate than Lar Daly, the legendary Chicago guy who ran for virtually everything during his lifetime (he never won); campaigning against tax increases and for castration of rapists while using the nickname “America First’ and wearing an “Uncle Sam” suit.

But the cowardly thing for Baldermann to do would have been to remain in the campaign, then proceed to run a weak election effort that would have drawn no attention and whose purpose would merely have been to fill a space on the Republican side of the November general election ballot.

Then, after losing to Halvorson, he could have tried claiming it was just a bad year for Republicans in ’08 and probably would have spewed the political rhetoric of losers – their political party didn’t do enough to support them.

I’m glad to know we won’t be hearing such talk from Baldermann, who was a desirable candidate for the Republican Party in Illinois because of his public service resume. He has never held a federal government position, but he is mayor of his hometown of New Lenox (a far southwest suburb of Chicago) and he also is police chief of the inner southwest suburb of Chicago Ridge.

HE IS A law enforcement professional who is not so limited in his worldview that he takes the time to understand the workings of municipal government. That is a combination of factors that, on paper, could have given Halvorson’s decade-long career in the Illinois Legislature a serious challenge.

One aspect of Baldermann’s withdrawal is ironic – the region of Illinois he comes from. Those same southwest suburbs of Chicago also produced one of the other notable incidents of a guy who decided that modern-day electoral politics just wasn’t for him.

Back in 1995, Edward Zabrocki was the long-time mayor of Tinley Park who decided to try getting into politics beyond the municipal level – winning election to a seat in the Illinois House of Representatives.

HE WAS A part of the Republican majority that seized control of Illinois government that year and used its power to try to ram a blatantly partisan political agenda through. The power politics disgusted Zabrocki so much that he resigned his seat after serving only six months of the two-year term to which he was elected. He has never to this day sought any office beyond being mayor of his hometown.

By getting out now, Baldermann becomes like Zabrocki – someone who decided that his real life was more important than a political one. Even though both men remain as suburban mayors, the reality is that those part-time posts are largely exempt from the “Democrat vs. Republican” wars some of us find so intriguing about politics.

I don’t know whom the Republicans are going to come up with to replace Baldermann on the November election ballot, although party officials from counties stretching from Will to McLean and out west to Bureau will have to get together soon (possibly this week?) to choose a replacement.

THE POLITICAL JUNKIE in me would have loved to see a serious clash between Baldermann and Halvorson. I was looking forward to the political infighting that would have taken place.

But now, I’m going to have to look elsewhere to fulfill my dreams of a congressional campaign brawl. Perhaps I’ll turn to the Illinois 14th congressional, where Republican James Oberweis is only a narrow favorite to defeat Democrat Bill Foster.

Despite the historic GOP tendencies of that far west suburban and rural Illinois district, the same national political trends that boost Halvorson’s campaign favor Foster against Oberweis. That is why those two are already spending big money on campaign ads to let us know that Foster is a liberal flake and Oberweis is a right-wing nut who sold out American jobs to China.

EDITOR’S NOTES: Here is the Internet presence of the congressional campaign (http://www.timbaldermannforcongress.com/) that never will be. It will be interesting to see how long this link remains alive.

From the “home of Proud Americans,” some information about Baldermann’s municipal (http://www.newlenox.net/board.html) record. It’s no wonder the GOP wanted him, even though some conservative elements believe Baldermann was little more (http://illinoisreview.typepad.com/illinoisreview/2008/01/ir-focus-tim-ba.html) than a stooge for Cook County Board member William Beavers.

For anyone who thinks Lar “America First” Daly sounds too ridiculous to be real, keep in mind (http://www.time.com/time/magazine/article/0,9171,892443,00.html) that my imagination is nowhere near creative enough to come up with a character like Lar.

Illinois’ new hot congressional race (the Illinois 14th) provides Hispanic people with lousy options regardless of who wins. Details are provided in a commentary published at The South Chicagoan (http://southchicagoan.blogspot.com/), which is the Chicago Argus’ sister weblog.