Dan Lipinski "existence" in D.C. will continue to be a thorn in Dem activist soul

There are some observers who want to believe that a batch of political ferrets on Tuesday are going to have a field day with the carcass of Rep. Dan Lipinski, D-Ill.

Those observers (pundits, wags, smartypants, whatever you want to call them) hate the idea of Lipinski representing the South Side in Washington because he’s not as liberal on social issues as they are, and they want to think he’s going to die politically this Election Day.

These bumper stickers sell for $3.95 each.

While the political junkie in me finds their attacks entertaining, I’m not swayed by their arguments that Lipinski, 41, is nothing more than some sort of George W. Bush clone – both because of his conservative views and because his daddy’s influence got him his current political post.

Lipinski is a former political science professor who decided to actually get into the game of politics when his father, William, retired following a decades-long career as a Chicago alderman and a member of Congress, both representing white ethnic neighborhoods on the city’s far Southwest Side.

Lipinski the younger likely wouldn’t have given up a tenured post at a university if he would have to go through the actual grunt work of putting together a campaign and getting himself elected. 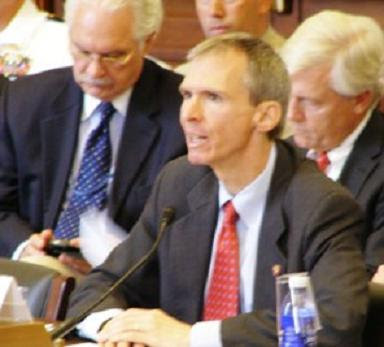 Rep. Dan Lipinski, D-Ill., in testifying before a House transportation subcommittee, is trying to follow in the footsteps of his father, who as a member of Congress was considered an expert in the area of mass transit who brought significant federal funding to the CTA. Photograph provided by Rep. Dan Lipinski.

He got the seat after his father won the 2004 Democratic primary to be re-elected, then decided to retire after rigging the replacement process so that party officials chose Dan to be the replacement.

As a result, Dan’s first campaign was in a general election against only token GOP opposition. His 2006 campaigns saw some competition, but he had the benefits of incumbency and was able to win with ease.

Common sense would suggest that Dan is even more of an incumbent this time around, and that any attempt to trash him as some sort of political daddy’s boy is too little, too late.

But that is not stopping Mark Pera, a 53-year-old former assistant state’s attorney for Cook County, from trying such a strategy.

He wants to build up resentment against the way Lipinski was elected, along with the fact that on votes in Congress related to issues such as embryonic stem cell research, abortion and the Iraq War, Dan is more in line with “W.” than he is with the Democratic Party’s platform.

Some political pundits, including many who write for Internet-related forums (the dreaded bloggers), want to believe that a social conservative in Chicago is dead meat.

I’d have to argue those people don’t have a clue as to what Chicago is about, and have forgotten that there used to be a strong conservative wing of the Democratic Party. Elements of those people still live in the Second City, and many of them are concentrated in the white ethnic neighborhoods that surround Midway Airport.

Those neighborhoods also are the heart and soul of the Illinois third congressional district that Lipinski represents.

The fact that Dan Lipinski, like his father, has moralistic qualms about abortion being legal, thinks the president’s war in the Middle East is justified and thinks stem cell research is just another step toward legitimizing abortion is not going to be held against Lipinski the younger.

Lipinski even is among the few Democrats in Congress who likes the notion of erecting concrete and electronic barriers along the U.S./Mexico border and opposes any loosening of standards that would allow people already working in this country to gain a path to citizenship – a combination of stances that caused Rep. Luis Gutierrez, D-Ill., of the neighboring 4th congressional district to rescind his primary election endorsement.

Pera tells reporters that “Reagan Democrats,” that species of ethnic, urban people who did not want to be made to feel guilty about their negative thoughts toward integration, are not as predominant in the area. He thinks that gives him a chance to win come Tuesday.

That’s not likely. In fact, Dan Lipinski may very well be able to claim to be the member of the Illinois congressional delegation who most perfectly represents the ideals of his constituents.

Let’s face it. Residents of neighborhoods like Clearing and Scottsdale live there because those communities are fairly distant and cut off from the rest of Chicago. There were no CTA elevated trains running into the area until the late 1990s, and the bus routes that run through the Southwest Side still require several transfers in order to get to downtown Chicago or anywhere else in the city.

There are families who have lived in the area for generations without moving. For what it’s worth, I have known “lifelong Chicagoans” who grew up on the Southwest Side, still live there and who have NEVER set foot in Chicago anywhere north of downtown.

It is a collection of neighborhoods that likes the idea of continuity. It was not overly bothered by the political maneuvering Bill Lipinski did on behalf of his son, preferring to think of Dan Lipinski as being similar to Illinois Attorney General Lisa Madigan, state Comptroller Dan Hynes and Mayor Richard M. Daley – all of whom had fathers who had significant careers in political office.

So the idea of keeping the Lipinski name as their member of Congress isn’t going to bother them all that much.

It also isn’t going to bother the Chicago aldermen who represent the wards covered by Dan Lipinski’s district. Most of them have endorsed Dan, and they will be organizing their campaign workers to churn out the vote for Lipinski the younger.

That’s why Rahm Emanuel, through his political action committee that is devoted to trying to help elect Democrats to Congress nationwide, chose to give Dan Lipinski a $2,500 donation.

Emanuel figures that blasting Lipinski out of that congressional seat is not worth the struggle. He’s also figuring that a Democrat who only occasionally votes with the party line is still better than a Republican who is openly hostile toward the color blue and all it has come to represent in political circles.

Also benefiting Dan Lipinski is a move that occurred a couple of years before he took office.

Back in the 1990s, Bill Lipinski represented a district that included South and Southwest Side neighborhoods and a significant portion of the southwestern suburbs – almost forming a letter “C” around the city portion of his district.

Those suburban areas were historically Republican, and Bill Lipinski usually had to actually campaign in general elections in order to win. But the 2002 redistricting benefited Lipinski by turning the district into an overwhelmingly city-based district, with only a couple of suburban patches included. Ironically enough, Dan Lipinski lives with his wife in Western Springs, not Chicago proper.

But it means that once making it past the primary, the Nov. 4 general election should be a token campaign since Dan Lipinski won’t have to worry about significant GOP turnout for an opponent.

Dan Lipinski is likely going back to Washington in 2009, where he will remain as one of the most conservative members of the Democratic caucus. And countless writers of political weblogs will need to undergo some serious psychotherapy to cope with the thought of “Danny boy” continuing to do D.C.

How conservative is Dan Lipinski? Here (http://www.ontheissues.org/IL/Dan_Lipinski.htm) is a summary, while here is the Lipinski spin (http://www.lipinski.house.gov/index.php?option=com_frontpage&Itemid=1) on his own record.