When the Chicago Tribune ran “Gary as the ‘third airport’?,” as a headline this week, I couldn’t help but think for a moment that someone in government had a burst of common sense.

But then I read into the story and realized it was merely about how Gary-Chicago International Airport would like to someday have more passenger airlines use their facility, which currently provides an outlet for cargo being flown into the Chicago-area and next month will have daily passenger flights connecting Gary to Greensboro, N.C.

THE ROLE OF the Gary, Ind. airport in the development of a third major airport for the Chicago area (in fact, the whole process of trying to develop another airport to compliment O’Hare International and Midway airports) is a classic tale of the way our politicos like to work at their own pace and are more than willing to hold off on the public good if it tries to come too fast.

Political delays in developing a new airport are not unique, as certain issues are perennials. They are controversial topics that sound impressive and provide the raw material for newspaper banner headlines and breathless accounts of television newscasts that make it seem that a historic moment is about to take place.

The classic perennial issue is gambling, particularly the construction of a casino in Chicago proper (not Elgin or Aurora or Joliet or any of the northwest Indiana towns). As recently as last year, officials talked of creating a casino as a way of raising money to help raise needed money for mass transit in Chicago. 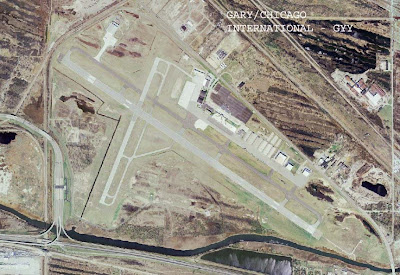 With some work, this airport could be the Chicago equivalent of Newark International. Photograph provided by Indiana Department of Transportation.

But it didn’t happen. It never does.

CASINO PROPOSALS OF many differing details were debated every single year I covered the Illinois General Assembly (1993-99) and have been discussed every year since I have moved beyond the Statehouse Scene. Actually, it wasn’t even a new issue when I covered it.

Despite all the rhetoric, NOTHING has ever happened that would result in shovels being turned in earth to dig up soil to lay a foundation for an actual casino in Chicago.

Similar to gambling, we’re also nowhere near getting a third airport for the Chicago area, even though the issue has been under review for three decades and reached a peak 17 years ago.

How long has this issue dragged on? Had action been taken back in 1991 when politicians were focused on it, we likely would now have an airport somewhere near Chicago to supplement the two airports that lie on the edge of the city limits.

COMING UP WITH an airport site has always been the problem, largely because politicos in Illinois and Indiana both want to ensure their state receives the economic benefits from its construction. Actual aviation needs of an airfield are irrelevant to many political people.

Back in the early 1990s (I covered mass transit for awhile for the now-defunct City News Bureau of Chicago), a commission of officials from both states had narrowed the sites down to four. One was a major overhaul of what was then called Gary Regional Airport, which had a cute little terminal and one runway.

Chicago officials always acted as though the issue didn’t affect them because none of the sites were in Cook County – the others were near Peotone, Kankakee and a site east of Beecher, Ill., whose sole benefit was that the Illinois-Indiana state line cut through the middle of the proposed airport (making it the perfect political compromise).

But Mayor Richard M. Daley derailed the process by proposing an airport on the far Southeast Side of Chicago that would have obliterated neighborhoods like Hegewisch and suburbs like Burnham, and would have turned places like South Chicago and Calumet City into a southern equivalent of places like Park Ridge and Wood Dale – which get hit with constant O’Hare Airport overhead jet noise.

I STILL REMEMBER the day when the political people officially chose the Chicago site. It was pure politics. Indiana officials on the commission solidly favored a Gary airport expansion, while the one south suburban Cook County member picked the site near Peotone and commission member George Ryan (later to become governor) voted for the site near his home town of Kankakee.

All the others voted for Chicago, and it won, only to be derailed the following year when the Illinois General Assembly decided to play its own partisan games. Daley rescinded his offer, and most of the talk about new airports since then has focused on Peotone.

In recent years, Rep. Jesse Jackson, Jr., D-Ill., has tried to lead development of a Peotone airport by saying it would benefit the economy of the entire south suburbs and far South Side of Chicago (which, not-coincidentally, is his congressional district).

But that puts him into a fight with Will County regional officials who want to see a Peotone-based airport as a local entity that cuts Chicago out of the equation altogether.

INSOFAR AS PEOTONE residents themselves are concerned, most of them do NOT want an airport near their homes. But they also see the political delays as evidence that things are so bungled up that nothing will happen anytime soon.

Meanwhile, Indiana officials continue to push for small-scale development of Gary-Chicago International out of hopes that future political mood swings could allow them to be ready to accommodate a future major expansion.

What I remember the most about the 1991 bi-state commission airport hearing was listening to Ryan when he said he could never, in good conscience, make any type of vote that would support putting a Chicago-area airport in Indiana.

That logic is so short sighted.

THE SITE AT the southern tip of Lake Michigan near steel mills make it ideal in that airport noise would affect steel workers (who might not hear it anyway due to the noise emanating from their jobs) and the fish that are able to survive in a portion of the lake that is tainted with steel mill waste.

Noise pollution for people would be minimal. Considering that I once lived under an O’Hare flight pattern (on Irving Park Road four blocks east of Cumberland Avenue), I appreciate first-hand how annoying constant jet noise can be.

A Gary airport expansion also would use land that already is contaminated and someday is going to have to undergo a serious environmental cleanup. Airport critics use that as an excuse to claim Gary is too expensive to build – ignoring the fact that the cost will have to be paid someday and likely will increase with the passage of time.

USING GARY AS a site for a new airport even fits in with the existing makeup of the Chicago area with O’Hare to the northwest, Midway to the southwest and Gary-Chicago at the far southeast corner of what can be called the Chicago area.

What is most disgusting about the “third airport” debate is that it is still going on. When it peaked in the early 1990s, studies said that if political people gave the needed approval for an airport site soon (perhaps by 1992), construction could start by decade’s end and the first flights could use the new airport sometime about 2002.

This airport should have been up and running by now. The fact that it isn’t is the ultimate evidence of political people ignoring the public needs.

It’s not like the overcrowded conditions at O’Hare International have alleviated. The only reason the airport is no longer the world’s busiest is because Hartsfield International Airport near Atlanta is busier – not because of a decrease in O’Hare flights.

SINCE MIDWAY IS already at its capacity (and was originally built back in the early days of aviation and was never really intended for modern-day aeronautic activity), it cannot pick up any of the O’Hare overload.

Yet the political people who perennially discuss building casinos in Chicago also have dragged out talk of developing a new airport.

FOR WHAT IT’S worth, I believe the day will come when politicians finally approve a Chicago casino, and perhaps even a new airport. Political people eventually get around to action, as long as they sense that the people affected by the issue have waited their turn.

The perfect example of someone waiting their turn is the Chicago Bears. Back in the mid-1980s, the football team was just as insistent as the Chicago White Sox baseball team that it needed a new stadium.

The White Sox played power politics and threatened to leave Chicago, thereby forcing politicos to act in 1988. Don’t think for a moment that they have been forgiven.

CERTAIN POLITICAL PEOPLE who resent all government support for sports teams think of the White Sox in particular as “persona non grata” because they forced the Illinois General Assembly to act ahead of its snail-pace preference.

But had the Sox waited until Illinois lawmakers finally felt like doing something, they likely would have had to wait as long as the Bears, who did not get a major overhaul of their existing stadium until 2003.

At that rate, maybe we’ll see a new Chicago area airport some time by 2020. Let’s just hope the needs of Chicago aviation can hold out until then.

EDITOR’S NOTE: Gary-Chicago International Airport (which I once heard suggested should be called Chicago South Shore Airport) has an ideal location to be the third-major airport (http://www.garychicagoairport.com/) for the Chicago area. Of course, that means political people in Illinois refuse to take it seriously.
Posted by Gregory Tejeda at 12:00 AM

In addition to Gary I've also heard about Rockford being a place to expand Chicago airports. Perhaps there won't be a need for a Peotone.