I am not overly religious, and I am one of those people who enters a church either for special occasions or when I am a reporter-type person on assignment.

Having said that, I cannot comprehend those people who are getting worked up over the Freedom From Religion Foundation, which is trying to stir up some excitement/resentment with their advertising campaigns promoting athiesm.

THEIR LATEST CAMPAIGN has been in Chicago for about a month, although the Chicago Tribune reported Tuesday that the group is stepping up their effort. It is billboards being put up along the sides of Chicago Transit Authority buses that travel about the city.

Instead of quoting “historical” figures about the need for separation of church and state or promoting the idea that there is no God (attorney Clarence Darrow saying, “I don’t believe in God because I don’t believe in Mother Goose”), the group is giving us what they consider to be a simple, practical reason not to go to church services every Sunday.

“Sleep in on Sundays.”

In a prepared statement explaining their new advertising billboards, the group says, “what the world really needs is a good night’s sleep.”

BLASPHEMY TO SOME, but blunt truth to others, many of whom already are using Sundays to get some extra sleep.

My point is that I don’t think this advertising campaign is going to sway anyone. It may get some people worked up into an outrage, which may very well be the point of those who put these billboards together. 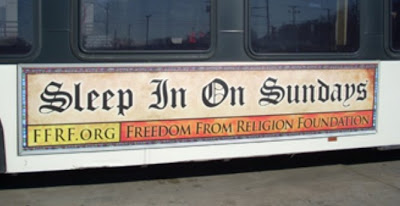 Is this worth getting worked up over? Or would religious types be better off taking a nap until it goes away? Image provided by the Freedom From Religion Foundation.

Which means that if the overly-religious among us (considering that most churches offer services throughout the week, I have never understood why it is all so important to have that one service that everybody pretends to attend and enjoy) really wanted to tick off their opponents, they’d ignore these billboards.

What gets me about this tactic, however, is that it is not at all a new one in Chicago.

I STILL REMEMBER back a couple of decades ago a group that was trying to promote the idea that couples were couples, regardless of gender. Hence, we got billboards put up on the elevated train platforms used by the CTA that included pictures of various couples kissing.

Those included some interracial couples, and even one couple of two men.

I was a reporter back then for the now-defunct City News Bureau of Chicago, and I still remember the what became of those billboards – they got vandalized within a day. Graffiti to block out the images of kissing.

And since the CTA prefers not to leave graffiti in place, they immediately removed the billboards – which the group that had paid for the advertising space could not afford to replace (printing up those signboards over and over can get expensive).

WHICH MEANS SOME may think the moralists “won,” but only at the expense of making themselves look ridiculous. Had they just ignored the things, they would have gone away after a month (the amount of time the ad campaign space was paid for).

They’d probably be long forgotten by now. I doubt I would still remember them.

I hope we don’t get anything equally stupid in Chicago this time around. Although it would be harder to vandalize these particular ad boards because they are being put on the side of the buses. How many people are crazy enough to try to tag the outside of a bus. If it starts moving, one could get hurt.

Easier to go inside and put a mustache on the Clarence Darrow picture that may be installed on bus’s inside.

THEN, OF COURSE, there was the Chicago attorney who specializes in divorce cases who advertised her own law practice by taking out billboards in the downtown area three years ago that read, “Life’s Short. Get a Divorce.”

What ticked off the moralists then were the pictures included on the billboards – showing scantily clad bodies to imply that divorce would result in lots of sex with better-looking people than one could possibly be married to currently.

The part that amused me about that particular ad was the fact that the attorney herself posed for the ad – it was her body in skimpy lingerie that gave many passersby a cheap bit of tittilation.

By comparison, nobody is going to get that much of a kick out of these new attempts to irritate the conservatives among us – one-time poet laureate Carl Sandburg isn’t about to tittilate anyone.

YES, THE FREEDOM From Religion Foundation even manages to drag in the author of “Chicago,” saying that people who worked in the “City of the Big Shoulders” would have been so tired from all their work that they would need the extra sleep.

People with sense who object ought to just keep quiet. Snapping at the bait just makes them seem foolish. Besides, they will need to save their strength to object to whatever the NEXT advertising campaign on a social issue turns out to be.