I’m not a fan of the Chicago Cubs,so I don’t have any real reason to care about pitcher Carlos Zambrano. 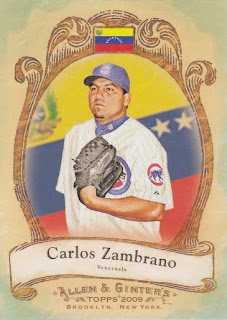 Yet I can’t help but think that the Cubs fans who are spewing their bile Friday all over the Internet need to lighten up in their vitriol related to their one-time ace pitcher, who managed to get himself suspended indefinitely for having a temper tantrum in the dugout at U.S. Cellular Field – where Zambrano had managed to give up four runs in what became a 6-0 defeat to the Chicago White Sox.

WHAT AMAZES ME is that Zambrano’s temperament really hasn’t changed during the nine years he has played major league baseball on the North Side. He has always been an outspoken, clownish hothead.

Back when he was winning games and making Cubs fans think they had found their perennial ace pitcher, his outbursts were interpreted as evidence that he was a colorful character. But now that he is struggling to the point where the Cubs earlier this season turned him into a relief pitcher for awhile, he’s not considered so cute.

It is as though Zambrano is confirmation of the perennial truth of that scene from the film, Bull Durham, where Kevin Costner’s “Crash Davis” character educated Tim Robbins’ “Nuke Laloosh” about the fungus growing on his shower clogs – telling him that when he won 20 games in the major leagues, his fungus would be evidence he was a colorful character.

“Until you win 20 in the show, it means you’re a slob,” Costner/Davis said.

SO IS ZAMBRANO the temperamental equivalent of a slob, for his tantrum against first baseman Derrek Lee (which was probably truly meant for himself on account of his homerun that wound up costing the Cubs a chance at winning)?

It’s not like this is the first time Zambrano has had an outburst on the field. Nobody should be shocked that he is capable of behaving in such a manner. Perhaps it is just evidence that we shouldn’t be looking to ballplayers to serve as our character role models.

Remember his six-game suspension last year. Or the fight he got into in 2007 with former catcher Michael Barrett?

That latter incident pops into my mind because at the time it was used as evidence that Barrett was somehow a problem, and that Zambrano was a victim. It was Barrett who provoked possibly the most memorable of all Chicago baseball brawls against White Sox catcher A.J. Pierzynski just the year before. It was Barrett who got traded away to the San Diego Padres because he couldn't get along with Zambrano.

BUT BACK THEN, Zambrano was THE MAN of the Cubs pitching rotation. Now, he’s the problem, so his temperamental nature (which is something many athletes have) is to be used against him.

Which means that one of baseball’s oldest cliches remains eternally true – You’re Only As Smart As Your Batting Average.

Or in Zambrano’s case, his earned run average, which as of Friday was an incredibly mediocre 5.66.

Posted by Gregory Tejeda at 8:03 PM