Even before I read the news reports this weekend, I knew that there would be something resembling disaster very near to us. I just didn’t know which Illinois towns would make the datelines.

It turned out to be Streator and Dwight, as serious tornadoes that cut through the Midwestern United States caused severe damage in multiple states besides Illinois.

WHAT GAVE ME my inkling was having the television on late Saturday. I was listening to it more than watching it, but the nasty buzz of the Emergency Broadcast System is not something that can be ignored.

Which is why I happened to hear the warnings with their computer-generated mechanized voice telling literally where tornadoes were being seen, and warning people in those communities to take shelter immediately.

At the particular moment that caught my attention, the tornadoes were headed east near Chebanse, a town on the Will/Kankakee county line right on Interstate 57. My gut reaction upon hearing this was to think, “it’s skipping Chicago.”

Because that point is literally what many people would consider to be the boundary between the Chicago metropolitan area and the rest of Illinois (although I am aware that Kankakee residents to the south are a part of the Chicago broadcast market).

WHICH MEANS THAT by thinking it was skipping by Chicago, I literally breathed a sigh of relief. That doesn’t mean I’m glad we didn’t suffer while people in Dwight did. It means that am fully aware of the fact that I realize a tornado is the great equalizer of the Midwest.

A powerful enough funnel cloud can devastate miles-long stretches of rural land, or take down a city block. It plays no favorites.

As much as some people like to tell tacky jokes about tornadoes that involve mobile home communities, I have alwa 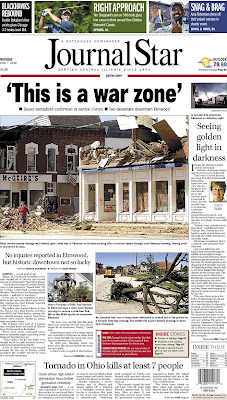 ys wondered how severe the wreckage and fatalities would be if a funnel cloud were to touch down at the northeast corner of Wacker Drive and Jackson Boulevard (otherwise known as the Willis Tower).

It doesn’t even have to be the tallest bulding in Chicago. Anywhere in “the Loop” would be bad. Depending on what time it would strike, the potential for carnage is significant.

FOR THE RECORD, modern-day downtown Chicago (as in the past century) has never had a tornado touchdown. The last recorded one in the area now considered downtown was on May 6, 1876, with 11 other tornado “touchdowns” taking place since 1870 within what we now regard as the city limits.

Which makes me wonder if we’re overdue. I know, you’d rather I focus on whether the Chicago Blackhawks can win the Stanley Cup Wednesday, or if they’re going to drag this out until week’s end. Somehow, I think those people on the fringes of Chicago now have something much more real to worry about than pro hockey.

It also does not help that I still remember being a reporter-type person writing copy for the now-defunct City News Bureau of Chicago on Aug. 28, 1990 when a tornado with winds exceeding 261 miles per hour struck suburban Plainfield.

It remains the most powerful tornado to ever hit the Chicago area, although the people who live in that Will County community still remember it as the moment when 29 people were suddenly killed – and another 350 injured.

I STILL REMEMBER the wreckage and rubble that suddenly erupted, comparable to what cut across the border between metro Chicago and central Illinois.

It remains to be seen how quickly those communities will be able to rebuild. It may even wind up becoming a positive story in watching how this weekend’s tornado victims are able to rebuild their lives after losing everything (while being thankful for whichever friends and relatives survived uninjured).

But I also will admit there is a difference between my seeing this kind of wreckage firsthand, and actually experiencing it – which is something I have not yet done in my life (and would not mind if I somehow managed to miss out on that experience).

The closest I can recall is back when I was 12 and saw funnel clouds developing in the skies above where I lived then in suburban Lansing. I still recall the feeling of dread while sitting in the basement, wondering at what moment the “destruction” would hit.

I WAS LUCKY. The funnel clouds I saw didn’t touch down anywhere close to where I lived then. I had a fortunate feeling that disaster had somehow skipped by me.

Similar to how I felt late Saturday when I was at the far southern end of Cook County near the Cook/Will border – hearing emergency warnings telling me that just one county away, potential existed for people to suffer.

That is too close for my comfort.

EDITOR’S NOTES: From the serious to the overly dramatic, this pair of videos help remind us of that day nearly 20 years ago when the Chicago area was hit with its most powerful tornado ever.
Posted by Gregory Tejeda at 12:01 AM