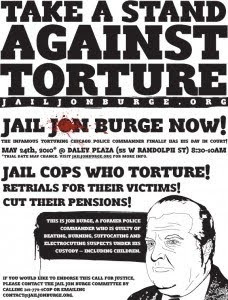 at the then-Pullman Area police headquarters on the far South Side.

That was where now-retired police Commander Jon Burge reigned supreme, and where he and his officers would use their torture tactics (if you want to believe certain people) to elicit confessions from suspects in their custody.

WE GOT TO hear memories of the cries of pain that Sammy Lacey Jr., said he heard coming from back rooms of the police headquarters on 111th Street, along with instances where he saw suspects when they were brought in for questioning looking relatively clean, then would later see the official booking photos that would show they had been battered about by somebody.

He even recalled seeing suspects with footprints all over their bodies.

If the jury that will decide the fate of Burge winds up believing this testimony, it would go a long way toward condemning him to a criminal conviction and spending much of his retirement years in prison.

Yet I have to admit that Lacey’s testimony, as gripping as it sounds, was not what intrigued me.

WHAT CAUGHT MY attention was the testimony of a woman who took the stand the very same day as Lacey. Darlene Lopez was the sister of a woman who claimed to have once “dated” Burge (I don’t know the details of their relationship, and I suspect I’m better off not knowing).

As such, she got to see Burge in some more private moments – such as the time she, her sister and Burge went on board his boat that was docked at Burnham Harbor (it must be nice to be able to afford to own a boat and keep it docked within walking distance of the Museum Campus and Soldier Field and within site of the downtown skyline).

The woman does not claim that she saw or heard any actual abuse during that moment.

But she recalls how, in an effort to impress the ladies, Burge got boastful about how he could be a tough guy when dealing with people who thought they were the tough guys.

SHE REMEMBERS HEARING stories from Burge about how he and his cop colleagues threw one man in the trunk of a car for awhile to break him down, and also said under oath that Burge told her about once having officers hold a suspect in place while someone else beat him with a bat to get him to talk.

“He thought it was funny,” the woman said while under oath, adding that she thought Burge was, “acting arrogant.”

That is putting it mildly.

I accept that some people honestly believe Burge is being picked on by being prosecuted by the U.S. Attorney’s office (on charges that he lied under oath while being questioned in a civil lawsuit related to the conduct of his officers back when he was police commander on the Far South Side).

THEY WANT TO believe that the police were only picking up people who, for whatever reason, were worthy of being considered criminal suspects. Some are even willing to accept the premise that police ought to be allowed to use some force in order to do their jobs.

There is a little bit of truth to that. If there wasn’t, we wouldn’t arm police officers with pistols and clubs to begin with.

But what gets to me is this woman’s sentiment that Burge was “arrogant” about his police behavior, as though he was proud to be the guy to got to smack around the members of the public who, for whatever reason, came to his attention.

People who don’t understand why some segments of our society are distrustful of law enforcement ought to look at Burge as the problem. His actions, if truly as widespread as has been claimed so many times, are what taint the police department.

THEY ARE WHAT make many people look at the cop who is approaching them at a particular moment and wonder to themselves, “Will he go by the book, or by the Burge?” (I learned a long time ago that it is a mistake to write off all police as being the same, but that it is worse to think that all cops are equally noble).

Of course, defense attorneys tried going after the woman, getting her to admit that this moment she described took place about 30 years ago and that it wasn’t a story she told much – until she was approached by FBI agents two years ago.

If prosecutors were relying on this woman to provide first-hand details of incidents of abuse, I’d be inclined to think the defense would be correct in their skepticism.

But her testimony was meant more to bolster the claims of the people who had the first-hand details.

BECAUSE BETWEEN THE image of Burge and his officers walking all over suspects (leaving behind their footprints) and later thinking it was “funny,” I’d have to say it was a not a good week for the Burge defense.

To think, there are people who seriously believe the interesting activity taking place now at the Dirksen Building involves Rod Blagojevich. Milorod is just a clown, compared to the alleged behavior of the officer who until recently was enjoying a Florida retirement.