With the international character that has long comprised Chicago, perhaps it is only appropriate that we now likely have Asian carp among our residents within the city limits.

For that is what the situation has become, even for those of you smartalecks who like to claim that the Far South Side of Chicago is its own little world – and not really a part of Chicago.

FOR THE FEAR that officials have long had seems to have been confirmed – we have the Asian carp in the area. All of those tests in the past that made it appear that the carp had not yet reached the Chicago area appear to be wrong.

For the news reports that came out Wednesday indicated the most blatant evidence that the carp are real – somebody who was fishing for fun actually caught one. It was down in the 10th Ward, in Lake Calumet to be exact. The news reports indicate the fisherman was in the part of the lake near the Harborside Golf Course.

The carp itself was nearly three feet long and weighed about 19 pounds.It’s carcass is now being sent off to various laboratories where it can be studied in great detail while people fret about what can be done.

What catches my attention is the fact that just a few weeks ago, officials from the Illinois Department of Natural Resources working with federal environmental and wildlife officials actually poisoned part of the water of the Little Calumet River that runs into the lake.

THEY FIGURED THAT any carp in the water would die and their carcasses would float to the top. None did. Yet now, we’re finding this particular fish in the lake that literally lies only about six miles from Lake Michigan. 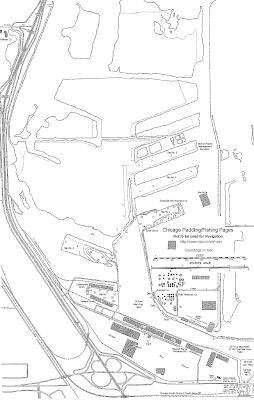 Lake Calumet has been reconfigured so many times throughout the centuries that the presence of an Asian carp almost doesn't seem invasive at all. Map provided by Chicago Area Paddling/Fishing Guide.

Which means we’re destined to get more rounds of political ranting and complaining from our Great Lakes States neighbors (particularly those whiners from Michigan, the state) who want to make it appear as though Chicago personally has introduced the Asian carp to the Great Lakes.

Now I realize the seriousness of this issue. The Asian carp is a species not native to this part of the world, and its presence in the Great Lakes would be devastating to the species that are native to Lake Michigan and its counterpart lakes.

I also realize that this is a species that is determined to spread. After all, it is one that was introduced in the United States into the Mississippi River near Mississippi, and has managed to swim upstream all the way across our country to the point where that river meets up with the Illinois River.

IT ALREADY HAS done its damage in downstate Illinois, and is inching its way across the waterways to Chicago – despite the attempts to poison it and use electronic barricades to keep it from advancing.

Which is why I am convinced of two things

One is that this fish is going to make it to Lake Michigan – if it isn’t there already. My gut feeling says it is already there (even though we don’t have evidence of that fact, yet!). It is a determined little sucker, we have to give it credit for that.

The other is that people getting all worked up in trying to get the courts to issue orders to penalize Chicago for this problem are missing the point.

WE NEED TO be working together to figure out a way to minimize the potential ecosystem devastation that could be caused by the Asian carp getting into the Great Lakes. Having Michigan officials take a “holier-than-thou” attitude and trying to play the victim is a waste of time.

If anything, I agreed with one person who used the Internet to comment that trying to blame Chicago for the Asian carp would be the equivalent of filing lawsuit after lawsuit against Detroit officials because of all the air pollution we now have due to automobiles.

It might be true in a theoretical sense. But it would be a waste of energy that would accomplish nothing.

Now I am not claiming to have the solution. All I know is that there will be people on the Supreme Court of the United States (who in the past have refused to issue court orders demanding that the locks allowing water flow between Lake Michigan and the rivers across Illinois be closed) and perhaps President Barack Obama himself who will start hearing a lot more heated rhetoric.

PERSONALLY, I AM waiting for the day that some political partisan (maybe even Rush Limbaugh) starts blaming the Asian carp on Obama himself. It will be intriguing to hear the convoluted logic they will devise in their mini-minds.

If anything, we ought to remember those 2008 elections – when the Great Lakes states of the Midwest were largely united behind Obama’s campaign, instead of our usual partisan divide that tends to see our part of the world as Chicago versus the Midwestern U.S.

For if we don’t unite in trying to find a solution, I can’t help but think THAT will be the factor that allows the Asian carp to get to Lake Michigan. We might as well run up the white flag of surrender now, if that’s the case.