Did you spend the weekend in the dark?

As a reporter-type person, I fully appreciate the reason why the big headlines during the weekend related to the severe s 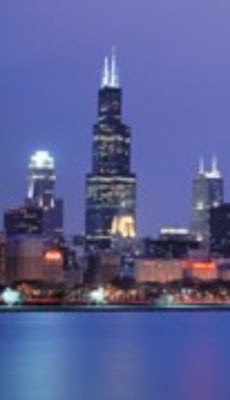 torm that pushed through the Chicago area Friday night were related to mass transit and the one-time Sears Tower.

The latter structure that for many years was the world’s tallest had some of its windows knocked out by the winds that reached speeds of about 70 miles per hour. That’s a lot of shattered glass on the streets of the south Loop (and around the area, depending on how far the high winds blew it about).

WE SHOULD BE thankful that no one who happened to be in downtown Chicago Friday night was killed or severely maimed by glass shards flying through the air.

There also were the delays in running the Metra commuter trains for people trying to get home during the Friday evening rush hour – which is when that storm that spread across the United States and has now worked its way to the East Coast managed to hit Chicago.

It was an inconvenience experienced by many as crowds trying to get on board delayed trains meant a human backup that must have been unpleasant to experience – particularly on a night when most people were just eager to get home following yet another week of hard work.

Yet I also realize that when most people recall this weekend, they’re not going to think of it as the time that glass flew through the air above the Loop. Nor will they think much about the delay they experienced in getting home Friday night.

IF ANYTHING, THEY’RE going to recall the conditions they found once they got home.

Because those storms managed to play havoc with the electrical power lines, which meant that many people got home to find they had no electricity. Some people had to endure the entire weekend without electricity.

Considering that temperatures also reached the high-80s at times, that meant no air conditioning.

Which means it was a miserable weekend for many.

NOW I HAVE to confess that I was lucky. Where I live, our inconvenience was minimal.

When those winds hit our area at about 4:30 p.m. Friday, they created a situation where electrical power kept fading in and out.

At the time, I was using my laptop computer to try to write a story for someone willing to pay me some money for my work. While my laptop had a battery that immediately kept it going continuously, my electrical “loss” was that the lights kept going on and off, and the device that gives me a wireless connection to the Internet kept starting and stopping.

Which meant that one moment, I had Internet access, while another moment, I did not. I had to wait about a half-hour before I was able to verify a couple of facts I was using to write a story.

I WAS LUCKY in that power never was lost for more than a few seconds, and after about a half-hour it quit misbehaving. I didn’t lose power. Some 555,000 customers of Commonwealth Edison can’t make the same claim

That is more than I can say for many Chicago-area residents, some 64,000 of whom still hadn’t had their electricity restored as of Sunday morning. ComEd officials said the utility company expected most of those to be restored by day’s end.

But there were some people who came home Friday night without electricity, and never got it back. Perhaps they had to leave for work Monday morning, wondering what they would come home to (even though theoretically, they knew it was likely it would be restored by then).

In my case, the closest I personally came to such a case involved my father, who lives in a nearby town but happens to be on a vacation trip with my step-mother. His house lost power at about 5 p.m. Friday and did not get it restored until 11 a.m. Sunday.

HE PICKED THE perfect time to be away from the house, which as far as I can tell did not sustain any other weather-related damage. He will return Monday having to do little more than figure out which items in his refrigerator went bad because of the forty-plus hours it endured without electrical power. Not that everybody in the Chicago area was lucky enough to be on vacation when the storm struck.

For those who couldn’t find a friend or relative to impinge upon, it must have been a primative weekend – on account of how dependent our society has become on having a steady source of electicity to keep us going.

They get my sympathies because I recall the time I experienced a lengthy power outage in my residence. But that was for about 19 hours – most of which was overnight while I slept. I’m sure the sweaty, clammy conditions I woke up in that morning without electricity were nowhere near as bad as what some people experienced this weekend.

Which is why I almost wonder if those stories emphasizing the Willis Tower windows went so far as to trivialize the weekend. It may be a significant building in Chicago (and the United States), but I doubt it had much to do with what most people experienced during the weekend.

You have to be the WORST writer ever...congrats.