Here I thought I was watching a Chicago-themed mediocre movie, not Holy scripture 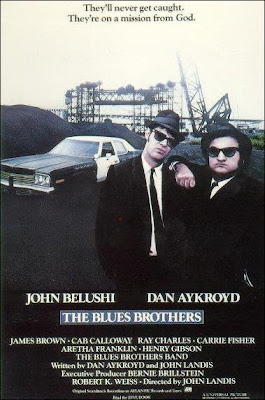 It has become something of a running gag throughout the years between my brother, Chris, and I.

We’ll pass by a church, or by anybody or anything, that is a combination of religious and either flamboyant or garish.

TO WHICH I will tell my brother, “you could use a little churching up.”

To which he will (without a doubt) respond, “I don’t want to listen to no jive-ass preacher talking to me about Heaven and Hell.”

No, we’re not really talking about the merits of theology (if anything, it would be somebody telling me I need some “churching up”). Nor are we in any serious philosophical engagement.

We’re just doing a riff off of a 30-year-old film that people of a certain mental composition want to elevate into a cinematic classic, while others will view it is as overbloated mess.

WE’RE TALKING, OF course, about “The Blues Brothers,” which took the musical characters created by John Belushi and Dan Aykroyd on Saturday Night Live and used them as the basis of a two hour-plus film that told the story of how Jake and Elwood Blues went to wild, wacky and crazed extremes to raise the $5,000 needed to pay that year’s property tax assessment on the orphanage where they had been raised.

That particular scene my brother and I do comes just after Jake and Elwood are chased down the stairs by a yardstick-wielding nun who is disgusted at what religious reprobates her two former charges have become.

Cab Calloway’s “Curtis” character was the one telling Belushi’s “Jake” to “get to church.” When he finally does show up, he gets to hear James Brown’s “Rev. Cleophus James” character sing and dance and we learn that, “Jesus H. Tap-Dancing Christ. I have seen the light!”

Somehow, when I first saw this film, I never thought I was seeing anything significant. I thought I was seeing a film with an overbloated storyline (although a wonderful R ‘n’ B soundtrack album that I still own, both in LP and compact disc form) that ran too long (although I understand what I saw in the theaters was a version edited from the Belushi/Aykroyd version that would have required an intermission midway through).

BUT NOW, THE Catholic Church seems to think we’re seeing something significant. The Vatican’s newspaper, L’Osservatore Romano (the so-called employer of another Saturday Night Live character, Father Guido Sarducci, who supposedly was the paper’s gossip columnist), published a series recently about Catholic references within pop culture.

The newspaper included “The Blues Brothers” as a film with a Catholic message.

I never realized that naming the yardstick-wielding nun Sister Mary Stigmata or that constantly having the lead characters declare themselves to be “on a mission from God” was enough to get the blessing of the sort-of official newspaper of Pope Benedict XVI.

Perhaps it was the pictures in the background of then-new Pope John Paul II that did the trick. I doubt it was the sound of legendary bass player Donald “Duck” Dunn uttering two of the crudest, yet most memorable, lines in cinematic history.

NOT THAT I think many of the film’s fans were all that interested in what the Pope or his advisors thought about the film. Probably no more so than all those Beatles fans who learned months ago through the newspaper that the Catholic Church has “forgiven” them for leading many of our society into that counter-cultural mass that many of us associate with the 1960s.

But now we have church approval to be able to watch the film that showed us “Illinois Nazis” suffering a deadly fate when their car drove off a highway ramp under construction – then suddenly managed to soar through the air high over the Hancock Building (all 1,127 feet of it) before crashing through the pavement of the street below.

Personally, what I find memorable about “The Blues Brothers” (and the reason why I occasionally dig out the DVD I own of the film) is the fact that Belushi used his sense of Chicago (he was a Wheaton native) to include scenes shot in neighborhoods that film crews usually wouldn’t venture into – and some of which no longer exist.

The old skid row on Van Buren Street in the south Loop, and the decrepit Trailways bus station that used to be in the north Loop. The Dixie Square shopping center in suburban Harvey (which never looked that good when it was really open for retail). The Chez Paul restaurant (“Mayor Daley no longer dines here. He’s dead, sir”) and the Joliet Correctional Center in the same film.

IT ALSO GAVE the 95th Street Bridge over the Calumet River that separates the South Chicago and East Side neighborhoods its moment of cinematic glory. Nobody who passes over that bridge today can help but wonder how it was physically possible for a broken-down former Mount Prospect police car to jump the width of the bridge while its trusses were opening.

Perhaps it was a religious miracle – one that would make “The Blues Brothers” worthy of its religious recognition now being received.
-30-
This may be an older version of the 95th Street Bridge (the current one dates to 1958), but it isn't too hard to envision a battered old automobile trying to make the leap. 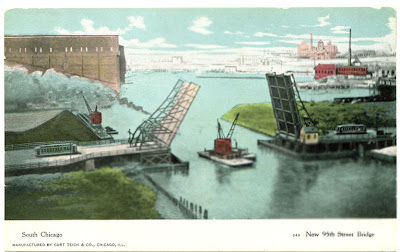