Where have all the news boxes gone?

I have to confess to not really noticing until the past couple of days – I can’t remember the last time I bought a copy of the Chicago Tribune from a news box.

I happened to be in downtown Chicago on Wednesday and had no problem finding an honor box for the Chicago Sun-Times in which to deposit four quarters in order to get a copy of the Bright One.


BUT LOOKING OVER at the nearby spot where there should have been a white and blue box hawking the Chicago Tribune resulted in vacant spaces. I wound up having to walk into that DePaul University bookstore that doubles as a Barnes & Noble franchise in order to spend my $1.99 for a copy of the modern-day incarnation of the World’s Greatest Newspaper.


It got me to thinking around all the locations that I used to stumble into and find a news box from which to buy a Tribune. They are all gone.


And now, Crain’s Chicago Business confirmed it with a report they published Thursday on their website. Newspaper officials won’t say, but the News Media Alliance confirmed that the Tribune really is eliminating those boxes in which people are trusted to deposit the correct amount of change before taking a copy of the paper.


The Tribune does still use honor boxes for the free publications they want people to take – such as the Spanish-language “Hoy” or the pseudo-alternative “Red Eye.”


BUT THE DAYS of reaching into one’s pocket and picking out some spare change in order to get a copy of the newspaper seem to be fading away. Which is a shame, since I have always been the odd-ball (at least as far as newspaper management is concerned) who wants the printed paper, but doesn’t particularly care for home delivery.


Although when one considers how much newspapers are costing these days, I suppose I can see where the idea comes in that you’re better off trying to get people to walk into stores where they can pick up a paper along with whatever goods they buy. Just think of trying to put $6 worth of quarters into a box for a Sunday New York Times.

In my case, the Walgreen’s about a block from where I live is a common spot for buying my copy of the Tribune. Either that, or whatever gas station I happen to stumble into while out and about with my life’s business.


Still, there is something about the news boxes that added to the character of the urban community. And not just because they’d have a tendency to eat peoples’ quarters and jam up – thereby refusing to provide people with the paper.


IN A SENSE, it was Chicago city officials themselves who began this trend when they required publications to put their wares in those massive multi-news boxes that were supposed to eliminate the clutter on the streets.


But instead, they often turn into a filthy, grimy mess, particularly when one looks at them and sees that most of the slots are empty. Not exactly something that anybody wants to deposit money into.


Besides, with the Tribune now charging $1.99, it makes me wonder if a news box would have to be built to accept pennies. Or if the Tribune would just want people to pay an even $2 – with all those extra pennies adding up to additional profit for the paper.


In short, newspapers cost quite a bit more than they used to – although I can recall decades ago when then-Gannett CEO Al Neuharth openly said major metro newspapers ought to charge in the dollars for their product rather than for spare change.


HIS THEORY WAS that it would increase the demographic of people buying the paper because the rabble who think in terms of the news box were less attractive to would-be advertisers.


I’m sure there are those people reading this who are screeching and screaming at their computer screens that I’m an idiot – I can read all this stuff for free via the Internet. Except that I really don’t like reading anything on a computer screen – I will go to my grave preferring ink on paper as a medium. 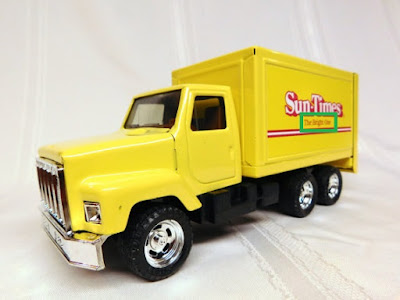 Even though it makes me wonder how much, at the end, I will be shelling out for copies of the paper. Since I can recall selling copies of the high school newspaper I wrote for, and being taunted by fellow students that they could buy copies of both the Tribune AND Sun-Times for the 50 cents I was asking for “The Arrow” of Thornwood High.

So when I hear the hedline to this commentary being sung in the back of my mind to the tune of the old Pete Seeger song “Where Have All the Flowers Gone?,” I realize I’m probably alone


EDITOR’S NOTE: I wonder how many people these days comprehend the one-time meanings of “The Bright One” or the “World’s Greatest Newspaper.”
Posted by Gregory Tejeda at 12:01 AM