EXTRA: Gods of baseball setting someone up for a historic whammy!?! 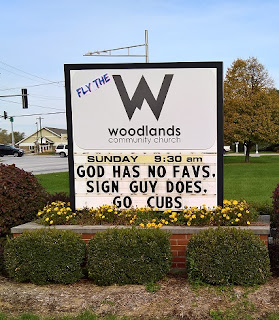 Perhaps this church in suburban Homewood has the right idea; the good Lord himself isn’t taking a rooting interest in the World Series.

Although the gods of baseball (to whom “Jesus” is Alou, the uncle of former Chicago Cub Moises) are likely setting up a doozy of an ending to this year’s World Series – which could come to its conclusion Tuesday or could draw out as long as Wednesday.


ONE PART OF me can’t help but speculate that for the Cleveland Indians to come this close to victory and still manage to fall short would truly be cruel and unusual punishment.


Of course, for the Chicago Cubs to have such a miraculous comeback would be so out-of-character for the ball club. If anything, it would be totally appropriate for the Cubs to be the team with the early lead that manages to find a way to blow it.


I know Cubs fans have been buying into the “best team in baseball” nonsense all season, and some are convinced that a Cubs ultimate victory MUST be pre-ordained. Even though the sensible part of my baseball fandom knows there is no such thing – even less so than crying in baseball.


IF IT REALLY comes down to the Cubs managing to avoid having to say “Wait ‘til Next Year” for the 109th time, it most likely will be due to some sort of act in the next couple of days by the Indians that blows it on a historic proportion.


Something that finally puts Fred Merkle’s “boner” to rest once-and-for-all. Which, by the way, was the only reason the Cubs managed to win that 1908 National League title instead of the New York Giants and even play in the World Series at all that year. Something that taints an Indians player for the rest of his baseball life. 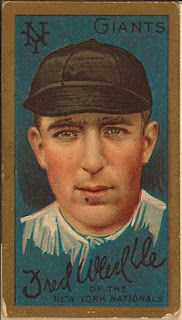 
Because if you’re seriously counting on Cubs skill to prevail, I’m pretty sure I can say that you’ll be crying at the sight of the “World Series Champion Cleveland Indians” piling on top of each other on their field in celebration – and having to be thankful you didn’t have to watch that sight live Sunday night at Wrigley following a Game 5 loss.