What a difference, a year makes 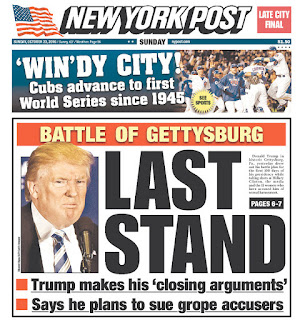 I couldn’t help but get my Sunday chuckle from the New York Post, which gave a subdued, if straightforward, attempt at portraying the Chicago Cubs’ National League championship (a first in 71 years) on its front page.


Particularly since I remember how over-the-top the paper was a year ago in making it clear the Cubs were meant to be walloped in the playoffs. Of course, then, the opposition was the hometown New York Mets.


SO MY QUESTION from a year ago remains – does this make Mr. Met the equivalent of a giant, smelly gorilla? With the Cubs being the equivalent of the fair Fay Wray (Jessica Lange or Naomi Watts, if you’re of younger generations)? 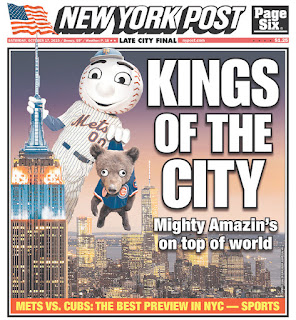 Or does this year’s play of the story mean that the Cubs’ win is acceptable because it came against the lowly Los Angeles Dodgers – for whom some aging Noo Yawkers have never forgiven for leaving their real home in Brooklyn?


The World Series begins Tuesday in Cleveland, and comes to Wrigley Field Friday through Sunday.


No weekend sporting conflict there, as the Chicago Bears don’t play again until Halloween (against the Minnesota Vikings), which will be a travel day with the teams returning to Cleveland for games six and seven – unless somebody actually manages to wrap this series up in under five games. 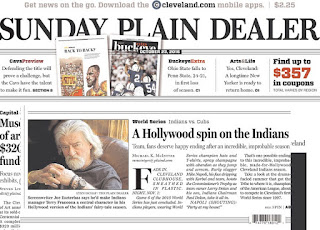 EDITOR'S NOTE: What should we make of the Cleveland Plain Dealer, which on Sunday published a story telling how Hollywood would turn the Indians' 2016 season into a film with a truly-Hollywood ending -- the Indians beat the Cubs in the World Series, four games to two. Somebody somewhere is going to be seriously disappointed with the outcome a week or so from now.
Posted by Gregory Tejeda at 1:56 PM