Why is Washington to be remembered?

We, the people of the city of Chicago, have been living in the Age of Daley (the younger) for so long that we literally have people who are legally 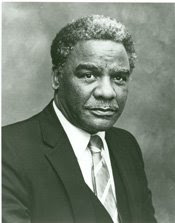 adults to whom Harold Washington is just a line in the history books – he was never a living, breathing human being.

There are others of a slightly older generation to whom the two Daleys have dominated their political perception, and the fact that there was once an interlude with people other than a Daley at City Hall seems like a dream – maybe it didn’t really happen.

IT IS WITH that attitude in mind that I take a few hundred words to try to recall the era that once was the mayoral term of Harold Washington. This is as good a time as any, because even though Tuesday was the 21st anniversary of his death (at his desk at City Hall, he was at work), he died on the day before Thanksgiving.

It was the early days of the Christmas holiday shopping season of 1987 that became the crazed era in which we mourned Washington and started to fully appreciate how ridiculous the Washington opposition was while he was alive.

And in the ultimate sign of absurdity, we even allowed David Orr (now the county clerk) to be acting mayor for a week, until Eugene Sawyer was pulled up from aldermanic obscurity to be mayor for a couple of years, until Rich Daley could get himself elected (restore order, in the minds of some Chicagoans).

I’m going to offend some people of a certain age with this next statement. But Washington wasn’t one of the “great mayors” of his age, or of Chicago. The fact is that having served only one term and a few months into a second term, he didn’t live long enough to achieve anything lasting.

ULTIMATELY, WASHINGTON’S MAYORAL term can be summed up in the trite phrase “first black mayor of Chicago.” Five words that don’t come close to capturing the mood of what Washington meant to this city. It’s too bad we never got to see what he could accomplish had he achieved his verbalized goal of being mayor for “20 years.”

Some might think that experiencing the rise from political obscurity of Barack Obama to the White House is comparable. It is, to a degree. But Obama ran at a time when opposition to the Republicans was so intense that any Democrat would have won the ’08 elections.

Washington ran for mayor at a time when the thought of a non-Irish guy (or gal) as mayor was “unthinkable” to many Chicagoans – even though those who knew how to read Census Bureau reports and analyze population trends should have seen it coming that the African-American population of this city was large enough to exert political influence.

Now I wasn’t quite a reporter-type person back then, although I was a rookie reporter writing for a newspaper in Chicago Heights when I learned of Washington’s death. But I was a high school kid when Washington was elected mayor in 1983, and was away at college in Bloomington during much of his mayoral term.

SO FOR ME, “Council Wars” was experienced in the form of newspaper copy. It was in that era that I developed the habit of reading multiple newspapers, particularly anything out of Chicago. And one of the things I used to look for were the City Council stories.

While I was born in the 10th Ward and appreciate first-hand the racial mentality (an ethnic island in a “black” sea) that goes through many of the area’s residents (I have some relatives living there who still think highly of the memory of former Ald. Edward R. Vrdolyak), I must admit I never fully appreciated how crazy “Fast Eddie,” or political people in general, could be until I heard of many of the stunts that were pulled.

And they were stunts, intended to prevent the Washington administration from accomplishing anything of substance that they could later take credit for. Which makes me wonder what his opposition of back then would think if they were to learn that he would someday have a junior college and the main library downtown named after him.

It wasn’t just the political people. They were feeding off the hostility of those whites who had their problems with the idea of a “black” mayor and who were fully supportive of what the “29” (as in opposition aldermen) were doing to Washington.

ULTIMATELY, THE WASHINGTON era is nearly just as much the Vrdolyak era, because it was a time when partisan politics came to dominate the City Council mentality in a way that is hard to imagine now, where the council has come to think of itself as Daley’s appendage.

It’s like we in Chicago got a 1980s preview of the nasty politics that would hit the District of Columbia in the 1990s during the Clinton era. Only instead of being rural Republican against urban Democrat like in Washington, ours were of a more craven nature – black vs. white.

The Wall Street Journal called us “Beirut by the Lake” for the hostilities that used to take place at City Hall, and it is a smirch the city will forever have to live down just like the memory of how Al Capone was allowed to operate openly in this city.

But ultimately, it means that Washington himself was unable to rise above the racial tone of the politics of the day. The mid-1980s was the “Council Wars era” more than it is the “Washington era.”

INSOFAR AS LATINOS, it was in that era that some activists started to use versions of the phrase “we break the tie,” implying that it was our coupling with black voters that helped get Washington the mayoral post, and that we could have deprived him of it had we switched to the white side (which many of us have done with our consistent support of Richard M. Daley).

And I still remember the one time I actually got close to the man.

It was the Summer of ’86, and I had a job on the Cook County payroll. Which meant that on the day that Vietnam veterans had their (in their minds) long-delayed “welcome home” parade along LaSalle Street, I was able to ditch my work and watch the parade.

I wound up getting a spot about 30 feet from where Washington himself (who served in the army during the Second World War) watched the parade. My impression? I couldn’t get over his girth, which meant that I wasn’t terribly surprised when I learned the cause of his death just over one year later at age 65.

EDITOR’S NOTES: An interesting assessment of the political life of Harold Washington (http://query.nytimes.com/gst/fullpage.html?res=9B0DE7D71431F935A15752C1A961948260), written on the day of his death, while a two-decades-later perspective offers (http://www.inthesetimes.com/article/3428/harold_washington_remembered/) a view of Washington’s accomplishments.

The Museum of Broadcast Communications may have an uncertain future, but their website (http://www.museum.tv/exhibitionssection.php?page=395) continues to offer memories of the insanity that occurred 21 years ago next week.

Washington was also a member of the Illinois House of Representatives and of Congress (http://bioguide.congress.gov/scripts/biodisplay.pl?index=W000180) during a political career that extended decades.
Posted by Gregory Tejeda at 12:01 AM