What is going through Durbin’s mind when it comes to the fate of George Ryan?

We’re going to learn in the near future who has more influence with Sen. Richard Durbin, D-Ill. – an elderly woman who misses he 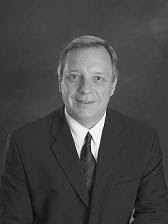 r husband, or an angry mob that likely will convene if the senator shows any compassion for the woman.

If we trust the reporting of Chicago Sun-Times columnist Mike Sneed, Durbin first became inspired to consider taking action on behalf of former Gov. George Ryan after sitting with his spouse, Lura Lynn, at a luncheon earlier this year only to hear about how she is struggling with her husband’s incarceration at the minimum-security work camp that is part of the maximum-security Terre Haute Correctional Center.

SHE MUST HAVE made an impression, because the fate of George Ryan has been bouncing around in his head ever since. Durbin admitted earlier this week that he is considering asking outgoing President George Bush to grant a commutation of sentence to Ryan, who has served just over 1 year of the 6 ½-year prison term he received for assorted government corruption charges related to his time as Illinois secretary of state.

But Durbin went so far as to concede that he hasn’t actually done anything yet – for good reason.

The topic of George Ryan does not bring out rational thought in anyone. And the thought that someone might show compassion to the 74-year-old man with health issues already has some people angered.

While I’ll be the first to admit that Internet surveys are pretty much worthless, the Chicago Tribune had one on Wednesday that had people opposed to sympathy for Ryan by a 4-1 ratio. A Chicago Sun-Times poll had a similar ratio of Ryan-haters overwhelming people who want to think more rationally about the former governor. 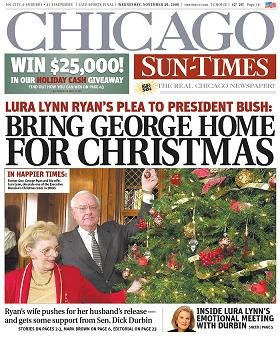 OF COURSE, I can’t help but wonder how many of those people were inspired into feeling disgusting thoughts by looking at the Sun-Times’ front page on Wednesday with it’s double-stacked banner headline reading, “Bring George Home for Christmas” atop a full-color photograph of Ryan and Lura Lynn back in happier days in front of a decorated Christmas tree at the Executive Mansion in Springfield.

I’m sure that some people took one look at the picture, thought to themselves, “How Dare He Ever Be Happy!,” and went to vote “no” for a commutation of sentence (which is not a pardon), before then writing a vehement comment or two on somebody’s web site.

Reading such comments has reinforced my belief that the only way some people will be happy is if they learn someday that George Ryan was killed in some sort of prison brawl.

Sorry, but that is sick. And the fact that such a thought process motivates much of the opposition to Ryan is a good part of why I still believe commutation would not be an outrageous act.

AFTER ALL, COMMUTATION merely says that he has served enough of his prison sentence. It does not, in any way, ease the stigma of his criminal conviction – which is likely to hang around Ryan’s neck for what is left of his life, considering that every appeals court has rejected his plea for a new trial.

The key to understanding the concept of presidential pardons and commutations is to remember that President Bush can use whatever criteria he wants to determine who is worthy of his sympathy.

Considering that Bush has issued far fewer pardons during his presidential terms than other recent presidents, it is a safe bet to say that the outgoing president is not going to be inclined to feel much of a need to do anything.

When combined with the fact that Ryan’s acts as Illinois governor related to the death penalty caused embarrassment for death penalty proponents and social conservatives who felt betrayed by someone they think should have been on their side of the equation, I’m convinced that it is a complete long-shot to think that George Bush will do anything for George Ryan.

IN THE END, the fact that Lura Lynn Ryan got a Republican operative to hand-deliver a letter from her directly to Bush (if one believes Mike Sneed’s reporting) might not mean much.

Bush will have his own pardon scandal in his final days in office when he uses his federal power of forgiveness to benefit his political friends. The last thing he’s going to want is to take on the stigma of showing compassion to George Ryan.

So it also won’t shock me if Dick Durbin ultimately decides not to take any formal action in support of George Ryan. Word that he was even considering it will be used as rhetorical ammunition against him in the future by the most rabid of conservatives. Actually taking action for Ryan will increase the number of people who will bad-mouth him.

Which is a shame, because it has never been much of a secret that I continue to have some respect for the government legacy of George Ryan, who was one of those old-school political people who was willing to put aside partisan concerns if it meant taking action toward a specific goal.

IN TODAY’S ERA of partisan politics run amok, that is considered a bad thing, almost as if one is selling out his personal beliefs by being willing to listen to “the other side.”

If it sounds like I think a bit of compassion for a 74-year-old man who has already lost just about everything he worked to achieve in life, that would be accurate – even if it puts the Chicago Argus in opposition to the official editorial stances of both of Chicago’s major metro newspapers.

Both think Bush ought to ignore any plea on Ryan’s behalf. He probably will, but that isn’t necessarily a good thing.

EDITOR’S NOTES: About the only difference between now and back when the Supreme Court refused to hear George Ryan’s appeal is that Dick Durbin has managed (http://chicagoargus.blogspot.com/2008/05/would-bush-really-grant-ryan-pardon.html) to get himself involved in the affair.

The people of Ryan’s hometown of Kankakee seem to want Ryan back in their midst, rather than in (http://daily-journal.com/archives/dj/display.php?id=431749) a prison in western Indiana.

A sampling of (http://cbs2chicago.com/topstories/george.ryan.comments.2.874378.html) the vociferous comments felt by some people toward Ryan’s plight.
Posted by Gregory Tejeda at 12:01 AM