My unsuccessful sojourn through Chicago and surrounding suburbs for newspapers

Some of you are going to snicker while reading this commentary, but I had a terrible time Wednesday trying to perform the simple act of purchasing a newspaper. What happened is that my offbeat personal schedule conflicted with the real-world demand for newspapers so that people could have a physical souvenir of Barack Obama’s victory in the 2008 presidential election.

THINK ABOUT HOW many of those newspapers are going to get tucked away in a drawer somewhere, out of a belief that they will appreciate in value as a remembrance of the night when this country picked its first president who racially was not claiming to be pure Anglo.

Because of Obama’s Chicago ties and the fact that the city plays such a large part of the character of that campaign, the Chicago-area newspapers are going to be in particular demand (does anyone really care how the Alton Telegraph plays the story?)

So there were the accounts of people snatching up stacks of papers Wednesday morning, and the two major metro newspapers in this city increasing their press run to hand 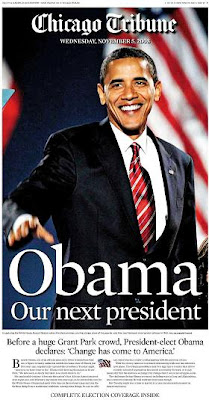 le the newsstand sales that were expected.

Although apparently, the Obama/McCain presidential campaign that resulted in possibly the highest voter turnout percentage ever also resulted in significantly higher newspaper sales on Wednesday. Most places were “sold out” by about 8 a.m., while I was looking for a paper at about 11 a.m. (which usually isn’t a problem).

THE END RESULT of those sales is that I didn’t get a paper. Not a Tribune. Not a Sun-Times. Not a New York Times (which is what I really wanted). Not a Times of Northwest Indiana (a newspaper I do some writing for).
Nor could I find newspapers such as the Wall Street Journal or the Chicago Defender. Heck, I couldn’t even find a SouthtownStar newspaper, which I don’t buy regularly but will read in a pinch.

During my drive, I flipped around the radio, stumbling across WGN-AM’s report that the Chicago Tribune completely sold out its press run on Wednesday, and was going to publish an extra 220,000 copies for sale at 7-Eleven convenience stores.

NOT THAT I could find any of those 7-Eleven stores that got extra copies. In fact, I couldn’t find any stores or news boxes that had any newspapers at all. 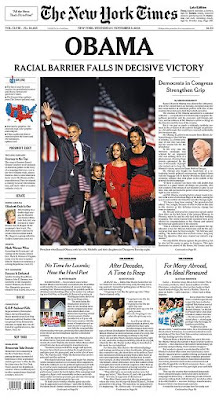 All of them were cleaned out of newsprint. I mean that literally.

Most of the places I went to had completely empty racks. Two places literally put up signs on their doors saying they were “out of newspapers.” Others had salesclerks tell me the instant I walked in, “no more papers.”

Now if I were interested placing a bet on the ponies, it would have helped. But in terms of trying to find a perspective on the world on this particular day – forget it.

Admittedly, I was able to go to the websites of all the newspapers I would have liked to consider getting a copy of. So I have a sense of just what copy was published in those newspapers.

But it just isn’t the same. Websites are nice when one is looking for a specific story (which means one knows already what’s in the paper) and can search for it quickly. But w 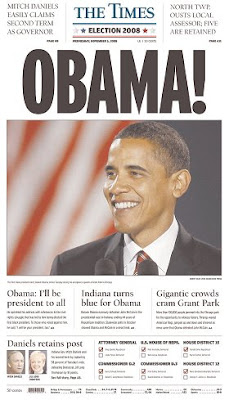 hen trying to get a feel for the larger picture (along with read longer pieces of copy that would take up way too many screens on a computer), the Internet becomes an inferior medium.

ONE LEARNS TO appreciate the advantages of the print medium.

In fact, for all that people want to say that newspapers are “dead,” it always struck me that the people who were most pushing that concept were the ones with an interest in the Internet. Their self-interest is served by thinking that printed publications are no longer desired by the public.

To what degree are Wednesday’s heavy sales an example that there still is a place for the written word published on newsprint? Is there still a place for the seriousness of the physical product when it comes to trying to comprehend major news events?

Is this the ultimate evidence that the future for newspapers is to make themselves more somber and literate – with less of the fluff that fills out way too many news-oriented television broadcasts?

OR IS IT just that the physical heft of a newspaper makes a great souvenir – more impressive than anything that could be published on the Internet.

I’ll be the first to admit that I would have liked to have the Times (the New York version, that is) to hold and puruse in future years as a way of remembering the completeness of the human experience on this day when Obama learned he is now going to get the regular national security briefings to prepare himself for Inauguration Day on Jan. 9.

I can understand that other people would feel the same way. After all, no matter how incredibly literate (at least in my own mind) my late-night “EXTRA!” analysis of Obama’s victory was, I doubt anyone seriously read the commentary and hit the “print” button on their computers.

It just doesn’t make as impressive a souvenir.

ONE OTHER POINT I must make. As much as I would have liked to buy a newspaper, I’m not interested in buying someone else’s used copy. Nor am I planning to scour eBay in search of one.

I did make a quick check late Wednesday, and found that someone already has put his copy of today’s Charlotte (N.C.) Observer up for bid – with a minimum bid of $100. It ain’t worth it.

The key to one of these newspapers developing true value is the passage of time, and the destruction of most of those copies. The fact that so many copies were sold means there are many, many newspapers from this day in circulation, which reduces their potential value to a collector-type.

Which means that t

he way it goes up in value is for your copy to be destroyed, so that 60 years or so from now, someone else’s surviving copy becomes valuable.

ABOUT THE ONLY way somebody’s newspaper will be worth something is if the particular copy has some special story, such as if someone could get the copy of the Arizona Republic delivered Wednesday morning to John McCain’s home.

One could claim that the wet spots in the newsprint were McCain’s tears after “reading all about it” that he lost.

EDITOR’S NOTES: Chicago newspaper publishers underestimated the number of copies of their publications (http://www.chicagobusiness.com/cgi-bin/news.pl?id=31701) they could sell on Wednesday. Apparently, I was not alone in experiencing difficulty in finding (http://www.editorandpublisher.com/eandp/news/article_display.jsp?vnu_content_id=1003887492) a newspaper on Wednesday. But I’m not desperate enough to buy this (http://tinyurl.com/55b4mk/) or anybody else’s newspaper that gets put up for sale on eBay.
Posted by Gregory Tejeda at 12:01 AM

Had a heck of a time finding a Washington Post too -- until they printed 350,000 extra copies. Line snaked around the block at the Post building to buy one.

The Trib is now selling copies online. I ordered one of those.

Thanks for your posting of various President Obama newspaper headlines around the US. I was not successful in obtaining a Minneapolis Star Tribune paper denoting the historical event! I was pissed.