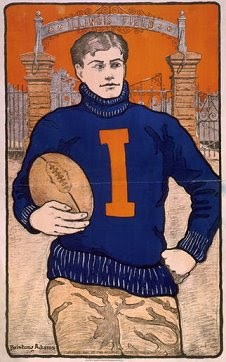 When it comes to mascots, I have gone to schools that had me rooting for a trotting horse, a Rebel (as in anti-Yankee), a generic American Indian chief (since abandoned) and a Fighting Titan.

None of these symbols (they’re really mascots, regardless of people who see “honor” in cartoonish images) drew the fan faithful the way some people continue to get all worked up at the image of Chief Illiniwek.

THE UNIVERSITY OF Illinois’ mascot died two years ago after the university’s athletic department learned the NCAA would penalize them as long as they kept the image of a white kid dressed as a faux Indian chief doing a parody of real dances of cultural significance to American Indian tribes.

But there are some people who are determined to never let the chief die.

That’s why activists who see the death of the chief as a cause celebre went ahead and picked a new student to portray the chief, and they plan to have that student show off his routine come this weekend.

Illiniwek, the sequel, will perform his dance during a celebration at Assembly Hall – the university’s basketball arena – even though the big athletic event on Saturday is the Fighting Illini/Ohio State football game to be played across the street in Champaign’s Memorial Stadium.

THAT ALLOWS THE university to say that the new chief is an unofficial event. And it would be improper for the university (which since it receives some state funding is technically an agent of Illinois government) to tell people who happen to be in Champaign what they can (or cannot) do with their spare time.

If they want to go watch a white kid prance around while wearing a buckskin costume, that’s their business. Personally, I (and I would hope most of the people who are in Champaign this weekend for the game) can think of better ways to spend my time.

Now I am not a University of Illinois alumnus (although my brother, Chris, is). So I have trouble taking it at face value that people seriously find the tired stereotypical imagery of an “Injun Chief” (and that’s what Illiniwek truly is) something getting all worked up over.

But I can picture that some social conservatives who are upset to learn that a lot of the imagery they grew up with was warped and twisted enough that it needs to go will see this whole issue as one of “political correctness” run amok, even though “politically correct” is really more about good manners than anything else.

DOES THAT MAKE the chief’s backers merely rude?

This backlash mentality is why I was always hesitant to get too outraged with and excited for the American Indian activists who devoted much time and effort throughout the years to getting the Chief Illiniwek imagery abandoned by the university.

I honestly believe that the current student body would not have cared much what happened to the “mascot” of the athletic department, because the University of Illinois students I have known throughout the years are no different than those who attend other colleges across Illinois without getting all attached to a goofy stereotypical image.

With that fact, Illiniwek would have faded away some two decades ago – if it had been left up to the student body.

ILLINIWEK’S SUPPORTERS WERE always a movement of older alums who were determined to keep the college just the way they remembered it (and when one considers that the Ku Klux Klan once had an official chapter at the university – check out their photographs in the 1910s era yearbooks – that past was not always pleasant).

These alums got so angered up that even after losing the fight (the chief will never be an official part of the university again – his dance routine at halftime on the football field proper remains history), they feel the need to keep fighting.

That is sad because this fight is a truly trivial issue. It detracts from the university and its athletic programs. Personally, I find it ridiculous to think there are people who are going to make a special trip back to their alma mater for the “big game,” just so they can see a fake chief do a dance. I don’t care how bad the Illini football program can be at times. They deserve better.

The idea that some people will pay $5 in order to get into the Assembly Hall just to see the dance strikes me as the ultimate in ludicrous acts. And the fact that they think they’re making a “political statement” is nothing more than pathetic.

EDITOR’S NOTES: Check out the Chief? I’d like to think that sensible students and others will celebrate (http://www.chicagotribune.com/news/nationworld/chi-talk-illiniweknov12,0,5703258.story) the Illinois/Ohio State outcome in the bars along Green Street.

So much for the concept that the student body at-large is all concerned about having (http://media.www.dailyillini.com/media/storage/paper736/news/2008/11/12/Editorials/Campus.Should.Let.The.Chief.Rest.In.Peace-3537990.shtml) Illiniwek back.

For those who want to relive the years of political infighting that finally culminated in the 2007 decision (http://www.will.uiuc.edu/am/projects/chiefilliniwek/features.htm) to do away with Illiniwek. And for those who think I’m kidding when I write that the Klan once had (http://www.library.uiuc.edu/archives/slc/researchguides/UIKuKluxKlan.pdf) a chapter openly exist at the Urbana-based university.
Posted by Gregory Tejeda at 12:01 AM