EXTRA!: Somebody hid the kryptonite

Barack Obama has come a long way from when this image was created of him at the Superman statue in Metropolis (the Illinois version). Photograph provided by Obama for America.

It appears that Barack Obama, the Hawaii native who adopted our fair city as his home as a young man just out of Columbia University, is now truly a citizen of the world.

The Chicago politico who is an alumnus of the Illinois Senate and the Illinois delegation of the U.S. Senate is now president-elect, making him number 44 in a line of officials going back to George Washington.

THAT MAKES HIM the third U.S. president with ties to Illinois – Ronald Reagan was born in Dixon and went to college in Eureka before leaving for an adult life in California, while Abraham Lincoln lived his adult life here before being elected president in 1860.

But Barack is the first with solid Chicago ties to get to be The Boss of the Oval Office – instead of just a trusted adviser (which in all honesty is the future role I would have envisioned for Obama when I first met him some 12 years ago).

Looking at the electoral map, what impresses me the most about an Obama victory is that he unified the Midwest in support (going against the idea that Chicago sits in a Midwestern sea of hostility). He took all those states that comprise Chicagoland (Detroit to Kansas City), even Iowa and Ohio – both of which were solidly Republican for George W. Bush, and was competitive in Indiana (which usually thinks of Democrats as people who eat their young).

The Obama victory became a reality shortly after 10 p.m., when the crowd at Grant Park (or Grant Field, as CBS News anchor Katie Couric kept calling it) erupted in cheer after learning that CNN declared Barack the winner. It was at about that time that Republican opponent John McCain made the concession call.

For those people who are now shuddering in their pants at the thought that one of our City Hall hacks is now the Leader of the Free World, relax. The truth of the matter is that Obama, 47, is a “good government” type with just enough of a pragmatic nature to be real about what can be accomplished by government.

My experience in watching him here is that this is not an ideologue, which is what scares the real conservative ideologues who want to think that unbending ideology is the key to being a worthy political person – actually, it just makes someone a stubborn twit. 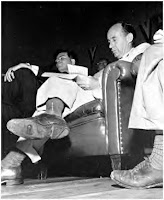 ics is about contracts and deals – and not ideals.

IT IS SIMILAR to the reason that the Chicago politicos of old backed attorney Adlai Stevenson II, making the former Illinois governor a credible presidential candidate back in 1952 and 1956.

And what of race, which was supposed to be the “kryptonite” that would take down the Obama campaign? Could it be that our nation is finally moving beyond its hang-ups with regard to race to accept a bi-racial man whose parents' marriage would once have been considered a criminal act in certain states?

In short, the nation is moving into the 21st Century, despite the fact that exit polls of white voters in Southern states shows them voting by a 3-1 ratio for the campaign of Republican opponent John McCain? Some of us are taking a little longer to accept reality than others.

“The Civil War is still being fought in these states,” commentator Mark Shields said during PBS’ analysis of elections results.

ONE FINAL POINT point should be made.

Let’s not forget Obama’s recent loss – the death of his grandmother, Madelyn Dunham, early Monday at her apartment in Honolulu. Obama is the guy who gets to go from the highs of being elected president to the lows of helping to finalize plans for his grandmother’s funeral within the span of 24 hours.

U.S. Grant? Lived in Galena before the civil war. Fourth President. Although I admit we'd rather forget about him...

This may sound like I'm trying to make my own rules (and it's my weblog, so I can do that), but I'm not counting Grant. He wasn't born here. He didn't die here. His tomb isn't here. The bulk of his life was lived elsewhere. So even though he spent a portion of his life in Illinois, it wasn't enough (in my opinion) to count.