Is the Rev. Moon really an issue in Davis’ dreams of serving in U.S. Senate?

Every political person at some point in their public lives does something that looks stupid, particularly if so 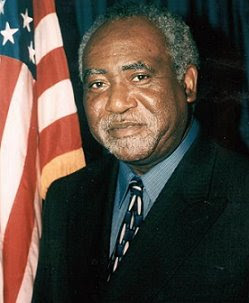 meone happens to be taking pictures.

For Rep. Danny Davis, D-Ill., one of many people with dreams of becoming a U.S. senator now that Barack Obama is moving to 1600 Pennsylvania Ave., N.W., his moment was when he helped participate in the coronation of the Rev. Sun Myung Moon as the “King of Peace.”

IT WOULD APPEAR we are now going to see a lot of the color photograph (Davis bringing in a pillow containing the crown that was placed upon Moon’s head that day in D.C. back in 2004) taken that day.

Or at least we’re going to see a lot of that photograph until the day that Davis decides his lot in life is to represent downtown Chicago and the West Side in Congress, rather than all of Illinois in the Senate. Which makes this revelation nothing more than a campaign tactic on the part of people who likely favor someone else to get that Senate seat.

I bring this up because I couldn’t help but notice on Monday that both the Chicago Tribune and the Capitol Fax newsletter of Springfield were reminding us of the fact that the photo exists.

Which means they’re reminding us about the Rev. Moon and the fact that Davis was willing to be seen in public with him.

I’M SORRY, BUT I didn’t get terribly outraged back when Davis partook in the coronation in ’04, and I can’t say I think it’s worth remembering all that much now. Some things are just too stupid to take seriously, including anything that was as pompous a ritual as Moon’s coronation – which most people would have long forgotten except that we’re being reminded again by people who want to use the incident for cheap political stunts.

Before I go further, I ought to make one point of personal disclosure.

I worked for the United Press International wire service in various capacities for 12 years – of which during the last four of those years, the wire was owned by News World Communications (the media company owned by followers of Moon who have visions of spreading his message to the masses).

One could argue that for four years, I took the Rev. Moon’s money. But I must also admit that of all the UPI owners during my time there, the Reverend’s people were the one group that had a sense about how to pay bills in a timely manner, instead of some of the delays of past owners that could have rivaled Illinois government for late payment.

I ALSO UNDERSTAND exactly why some people consider the Reverend – the founder of the Unification Church that many consider to be a cult that bleeds its followers dry financially – to be a controversial character.

From his belief that he is the messiah (which he says makes his birthplace of Korea the new version of the Holy Land) to his two prison terms (he brags about the one in North Korea for preaching Christianity in an atheist country, but is less talkative about his U.S. conviction on tax-related crimes), the Rev. Moon is not the typical Korean immigrant operating a neighborhood grocery store.

I’m even aware of the fact that the reverend has made statements implying that Jewish people killed in Germany during the Nazi era were merely being punished for their support of a religion that killed Christ.

What can I say, my former boss is not the man next door. Although I’m not convinced that he’s the most outrageous person on the planet the way some people would want to portray him.

IN FACT, THE reverend’s politics have always been so anti-communist that he has fit in well with the Republican establishment now that the party has long chased out its liberal elements.

His biggest contribution to U.S. political culture has been trying to operate media properties that openly admit their conservative bias (even though I must admit the Moon-run UPI I wrote for never tampered with my copy, although there were some writers who were hired specifically to write the commentary and conservative analysis Moon’s people wanted pushed by the wire).

Ronald Reagan himself used to call the reverend’s Washington Times newspaper one of his favorites, and what is left of the GOP establishment in the District of Columbia is going to be turning to the Times as its source of information and a sense of community for the next two years that they are destined to be irrelevant on Capitol Hill and the White House.

If anything, I’d be critical of Davis for associating with someone who is so friendly with conservatives, rather than for partaking in a ritual that looked ridiculous.

HOW RIDICULOUS IS it?

Just think if a political person showed up at a Shriner convention or a Knights of Columbus-sponsored event. I’m sure an equally goofy looking photograph could be taken of them at such an event.

Just envision Rod Blagojevich in a Shriner fez or Mike Madigan brandishing one of those K of C swords? I can’t help but think Davis’ impression of Moon having a crown put upon his head was similar to what we might think of one of these fraternal groups and their rituals – just another goofy sight he can chuckle over at a later date.

Trying to make more of this incident is worse than anything Davis might have done.

SO I HONESTLY do not believe Davis is a “Moonie” or a sympathizer, any more than I think he’s got a good shot at actually getting Blagojevich to appoint him to the Senate seat.

He might be naïve for believing the rhetoric of “world peace” that came out of that particular event, but I honestly believe anyone who tries to create anything more of this incident than a silly-looking moment for the Daily Show’s Jon Stewart to mock is a liar or is allowing themselves to be manipulated by people who want to distort the truth.

EDITOR’S NOTES: Is someone taking Danny Davis’ desires to be a member of the U.S. Senate so seriously (http://thecapitolfaxblog.com/2008/11/17/replacing-barack-moonies-cronies-craziness-and-the-best-fake-candidate-ever/) that they feel the need to dredge up (http://blogs.chicagotribune.com/news_columnists_ezorn/2008/11/can-danny-davis-star-rise-with-a-moon-in-the-way.html) the Congressman’s appearance four years ago with the Rev. Sun Myung Moon?

Figure for yourself just how dangerous a character (http://www.gorenfeld.net/book/) the Rev. Moon truly is. Here is the (http://www.reverendsunmyungmoon.org/) official Moon propaganda perpetuated on the Internet.

I don't think you know who Moon is or what he wants. He says he's anti communist but he is also anti "American style democracy" – he wants a world run by theocrats under his influence. The WT was designed to manipulate our political system right so the theocrats like Falwell and Lahaye who Moon also funded could operate.

No one outpsent Moon funding the right wing horror our nation and the world has had to deal with the last 30 years.

I am amazed at your admission that he hired people at UPI to do his grand plan's bidding. I knew it but was surprised you admitted it. UPI is a propaganda arm for the culmination of Moon's grand plan to subdue the world, the Universal Peace Federation.

Although the Moon org spun it, the crowning actually represented in Moon's world America "surrendering" to Moon. In a way we have since the conservative movement has worked with Moon to gain power. He molded them and through them our political system.

Moon is not a Christian. That's a bunch of hooey. He does not accept that Jesus was God as most Christians do. He says Jesus was a failure who now serves Moon's dead son in heaven. Moon says he is greater than God in ways.

Do "Christians" swindle widows out of hundreds of millions of dollars? Google "Moon Japan spiritual sales" and see where some of the money he used to make your ontime paycheck originated. He also funded torturing dictators in South America.

Here's what his daughter in law said about his tax conviction here in the USA which they spin as the USA "persecuting" Moon.

"There was no question inside the church that the Reverend Moon used his religious tax exemption as a tool for financial gain in the business world."

"No matter what the lawyers said in court, no one internally disputed that the Reverend Moon commingled church and business funds. No one had any problem with it. How often had I heard church advisers discuss funneling church funds into his business enterprises and political causes because his religious, business, and political goals are the same: world dominance for the Unification Church. It was U.S. tax laws that were wrong, not Sun Myung Moon. Man's law was secondary to the Messiah's mission."

This is what the first editor of the Washington Times said in 1990. He is correct and is speaking also to you:

"They (the Moonies) are subverting our political system. They're doing it through front organizations--most of them disguised--and through their funding of independent organizations--through the placement of volunteers in the inner sanctums of hard-pressed organizations. In every instance--in every instance--those who attend their conferences, those who accept their money or their volunteers, delude themselves that there is no loss of virtue because the Moonies have not proselytized. That misses the central, crucial point: the Moonies are a political movement in religious clothing. Moon seeks power, not the salvation of souls. To achieve that, he needs religious fanatics as his palace guard and shock troops. But more importantly, he needs secular conscripts--seduced by money, free trips, free services, seemingly endless bounty and booty--in order to give him respectability and, with it, that image of influence which translates as power."

All that said, Congressman Davis at least quit shilling for Moon shortly after the "event." Oh, and now that Moon has added "peace" to his orgs name, many blind, naïve and uninformed democrats have sent him letters of support including the good Governor.

Leaving aside the Rev. Moon issue, what has Danny K. Davis done in the House of Representatives that persuades you he'll be an effective Senator?

Davis has a great voice. And there are people around Illinois who haven't yet heard his stories about growing up in Arkansas. But if we're looking for a Senator who will get stuff done, there are better choices.