A DAY IN THE LIFE (of Chicago): Did police violate Obama celebration? 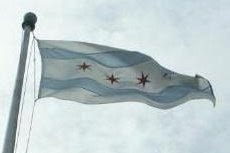 ne on Election Night. Yet a lawsuit filed this week in U.S. District Court claims abusive behavior that night occurred on the part of the police.

A family that lives in the vicinity of Central Park and Chicago avenues (the West Side) filed the lawsuit Thursday. The lawsuit claims that when area residents went outside that night to cheer and run around upon learning of Obama’s electoral victory, police came into the neighborhood and used pepper spray to try to calm things down.

THE CHICAGO TRIBUNE reported that one group of neighborhood residents had a whole canister thrown into their group, which caused one member to do his best “war movie” impersonation when a grenade lands in his midst.

The person allegedly threw the pepper spray canister back at the police.

The end result, according to the lawsuit, was a chase on foot, with police kicking down the front door of a residence, pinning the family members of that house to the floor, and uttering (Surprise!) racial epithets.

The lawsuit accuses police of committing acts that constitute a “hate crime,” and seeks $200,000 in damages.

This incident is going to come down to whether the police had any legitimate reason to be in that neighborhood and use pepper spray. Because the simple fact is that the law does give police the legal authority to use some force, and the person who threw that pepper spray canister back at police likely gave “Chicago’s Finest” the legal authority for all their other forceful behavior that night.

That includes (http://www.chicagobreakingnews.com/2008/11/police-sued-for-election-night-incident.html) kicking down the door of a family’s home.

What other nuggets of news took place Thursday in the Second City (which is really third)?

I’M STARTING TO THINK LIKE A GROUCHY OLD MAN: The Chicago Transit Authority is raising the fares for bus and elevated train service, while also talking about laying off about 200 employees.

Those two acts strike me as being contradictory. Cutting staff results in less service, which makes CTA service less attractive to would-be customers. That means fewer riders, which means yet another round of fare hikes at some point in the future.

Under the measure approved by the Chicago Transit Board on Thursday, fare cards will rise Jan. 1 from $1.75 to $2 per ride. A ride paid for by rail transit card will go from $2 to $2.25. (http://www.chicagobusiness.com/cgi-bin/news.pl?id=31816) For those who use the Chicago Card program to pay for rides, bus fare will go to $2 and rail fare will be $2.25 per ride.

Seeing those fares makes me feel old, since I can still remember using the “el” trains and buses to get all over Chicago back when I was in college, knowing that a ride would cost $1 (and that included the cost of a transfer). Of course, that was also back in the days when people used tokens, rather than those danged fare cards.

HOW MANY TITLES CAN SHE GO THROUGH?: Patti Solis Doyle, a longtime political operative in her own right and the sister of Alderman Danny Solis, is likely to get yet another job title.

Doyle was the campaign manager for Hillary Clinton’s failed bid who got replaced early this year. Eventually, she was hired by the Obama presidential campaign to be a chief of staff for the then-yet-unchosen vice presidential nominee.

But VP-elect Joe Biden was bound to want to pick his own chief of staff, and on Thursday he announced that Indianapolis native Ron Klain (http://www.indystar.com/article/20081113/NEWS0502/81113028) will get the job of being the “brains” behind the man with the job title.

For her part, Doyle is being considered for a liaison position to a cabinet secretary, which would make her one of the people who really knows what is going on in an Obama administration, and uses that knowledge to prop up the presidency.

SWISHER GETS FATE THAT SHOULD HAVE BEEN WOOD’S YEARS AGO: Chicago White Sox outfielder Nick Swisher (the journeyman that some people had delusions would become a star this year) achieved the wildest fantasy of many a professional baseball player – he’s now a New York Yankee.

The White Sox traded Swisher and a minor league prospect to the legendary baseball franchise from the Bronx for three minor league ballplayers – two of whom supposedly (http://mlb.mlb.com/news/article.jsp?ymd=20081113&content_id=3678194&vkey=hotstove2008&fext=.jsp) have the potential to someday become quality pitchers.

Swisher was not the only ballplayer to say “goodbye” to Chicago. Cubs’ pitcher Kerry Wood (the never-was superstar who once struck out 20 hitters in a single game) was told by team management that his time in Chicago was over after a decade – even though he had previously shown a willingness to stay in this city even if it meant less money.

So now, Wood is looking for employment in professional baseball. It’s too bad he couldn’t have made the move to New York a few years ago. I’m always going to wonder (http://www.nbcchicago.com/sports/baseball/Waving-Farewell-To-Two-Chicago-Fan-Favorites.html) how much being a Cub retarded Wood’s career, and if he could have avoided injuries in New York and been the key to another pennant or two flying over Yankee Stadium.

PIZZA PARTY NEAR THE WHITE HOUSE?: He’s not quite turning the Inaugural Ball into a pizza party, but President-elect Barack Obama apparently wants some of his favorite pizza on hand in the District of Columbia.

The family Obama likes to order out from Italian Fiesta Pizzeria, a neighborhood carryout joint, and owner Patti-Harris Tubbs says she received a call from the Ritz Carlton Hotel in Washington, placing an order for a couple dozen pizzas for an inaugural expo to be held Thursday at the hotel.

Not that she’s going to be shipping them to D.C. (what do you tip a delivery driver who makes a 1,000-mile trip?). She’s waiting for another call from the hotel, where she will (http://www.suburbanchicagonews.com/heraldnews/news/1277590,4_1_JO13_PIZZA_S1.article) receive instructions on coming to Washington to help the hotel’s gourmet chefs recreate the pizzas.