I have worked in the news business long enough to understand the problems confronted by deadlines – they are unbendable, unless someone has a readership that doesn’t care about getting their publication delivered on time.

That rarely is the case. So often, a story has to be cut short in mid-happening, to ensure that it gets out to the public in a timely manner. Sometimes, someone has to take an educated guess as to what will happen – then hope that there really is a God who will prevent something unexpected from changing the outcome completely.

THAT DEITY MUST be hearing prayers big time these days from cartoonist Gary Trudeau, and from the editors of a Santa Fe, N.M.-based newspaper. Both of them have already taken steps that declare Barack Obama the winner of Tuesday’s U.S. presidential elections.

In the case of the New Mexico Sun News, the newspaper’s current issue has been sent out with their attempt at a big screaming banner headline reading “Obama Wins!” Apparently, they have dreams that Obama maniacs across the country are going to want a copy of the first newspaper to say their guy won, because the paper’s website these days has nothing but instructions on how and where to send money if you want to buy a copy.

And in the case of Trudeau’s award-winning (and decades-long running) comic strip “Doonesbury,” he has already sent out to editors a series of strips to appear in newspapers this week. The one set for Wednesday has characters in the army stationed in Iraq watching a television set, where a newscaster informs them, “and it’s official, Barack Obama has won.” 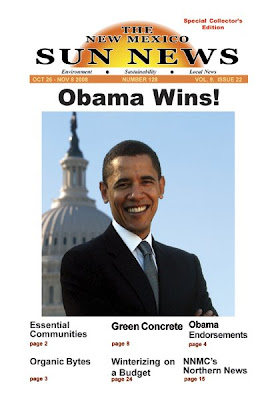 Are you willing to spend $7 (plus shipping and handling fees) to buy a copy of this newspaper? If so, check out http://www.nmsunnews.com/. Otherwise, pat yourself on the back for having some common sense.

For the record, the campaign of John McCain is trying to downplay these incidents, issuing a statement with regards to Trudeau implying that his strip just isn’t funny enough to take seriously – regardless of what he writes and draws.

BESIDES, TRUDEAU’S CAREER survived his gaffe of 1990 when he drew a strip in advance implying there would be no immediate reaction on the day then-President George H.W. Bush set for a deadline for Iraq to get out of Kuwait. I seem to recall that right at 12:01 a.m., “Operation Desert Shield” became “Operation Desert Storm” and the U.S. Army (including a cousin of mine) invaded Iraq.

The problem for Trudeau and the Sun News editors is that they are on less than a daily publication schedule.

For Trudeau, he usually has to do something like three weeks worth of comic strips in one shot, which are then sent out. So the strips that are scheduled to appear in newspapers this week were drawn sometime in early October.

So, he winged it. He took a guess, telling reporter types that the polls are all so overwhelmingly showing Obama as a big winner that if McCain actually winds up victorious this week, he will not be the only one to screw up.

HE GOES SO far as to say that he thinks the fact that his strip could turn out to be “wrong” would be lost in the flood of others who would also be wrong.

That attitude I can understand, in part because “Doonesbury” ultimately is just a comic strip (even though some newspapers are so humorless that they insist on running it on editorial pages).

If there’s anyone I have a problem with, it is the editors of the Sun News, who went ahead and did their front page with a hard news lead as a cheap stunt to draw attention to their publication.

The Sun News is a newspaper that only comes out a couple of times per month. By the time the next issue hits the streets, Election Day will be so ancient history (that’s the scary thing with modern news media news cycles, when seven to 10 days becomes like a millennium).

SO THEY WENT ahead with their front page intended to be a collectible (perhaps they have delusions of copies being hawked on eBay?). In the process, they cheapened themselves to the point where I can’t say I’d want to have a copy of their newspaper.

There are just some newspapers that ought to accept the fact that they can’t do the breaking news routine. The Sun News is one of them.

I understand they likely will want to do some serious analysis of the New Mexico elections, where the fact that such a large percentage of the electorate is Latino means Obama may be able to “steal” this state’s electoral votes from the Republican column.

But the way to promote legitimate stories such as that is hardly by pretending that your newspaper is offering the definitive newspaper front page that history books of the future will use to illustrate their paragraphs about the 2008 presidential election.

BY PRETENDING, NOT only are they letting their own egos run amok, they’re also feeding the anger of those half-wits who are looking for any excuse to believe there’s a massive media conspiracy determined to keep Sarah Palin from being just a heartbeat away from the presidency.

Perhaps the McCain campaign is among the few who have taken up the Sun News’ offer to buy themselves a copy (only $7), just so they can have the senator from Arizona waive it over his head early Wednesday – in hopes that the resulting photograph becomes as much of an iconic shot as that photo of Harry Truman with the Chicago Tribune.

Now personally, I’m inclined to believe neither Trudeau nor the Sun News are going to look too stupid Wednesday.

THE MOOD I’M sensing is that the people who truly believe in Obama, when combined with those who are repulsed by McCain for picking “that woman” as his running mate, are a larger force than the people who – whether motivated by race, liberal views on social issues or a combination of the two – just can’t bring themselves to vote for Obama.

But there’s also the paranoia running among some Democrats that such support isn’t enough (let’s never forget that Al Gore won the popular vote in the 2000 presidential election). And if the hard-core conservatives were willing to play hardball to win that election, they definitely will go all out for this one.

It’s like a recent newspaper column by the Rev. Andrew Greeley, where he said he did not believe the polls showing Obama with large leads, comparing Republicans to coyotes. “Coyote is still out there, and he’s still hungry,” the reverend wrote.

Is the Rev. Andrew Greeley hearing directly (http://www.suntimes.com/news/greeley/1247262,CST-EDT-greel29.article) that God is ignoring the prayers of certain media types who are hoping their early predictions that Obama will win will not come back to bite them?