Professional baseball and the Olympics – will Obama impact the sports world?

It always amuses me the degree to which political people, who have the authority to impose sig 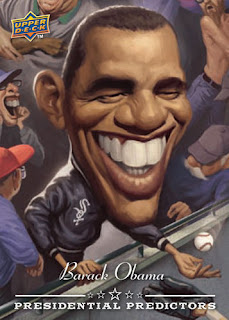 nificant change to our society, go ga-ga whenever they’re in the presence of professional athletes.

Those same athletes could usually care less about anything political – unless it winds up having a direct impact on their narrow world focus.

SO WHILE SOME people are pondering whether Rahm Emanuel made a mistake in giving up a chance to be Speaker of the House someday so he could be President-elect Barack Obama’s chief of staff now, and others are trying to figure out who will sell their soul to the devil/Rod Blagojevich for a chance to be a U.S. senator for two years, there is yet another subgroup that has its priorities set differently.

How will Obama’s presidency impact athletics?

Think I’m exaggerating? I’ve already read several accounts of various athletic-related issues to which Obama will have an affect just because of his pending move from Hyde Park to 1600 Pennsylvania Avenue, N.W., in the District of Columbia.
The obvious one is that people are saying the love the international community has for the Obama persona will reflect well enough on the United States that this country may very well get to host the summer Olympic Games in 2016.

IT IS EXPECTED that since the U.S. Olympic Committee is putting its bid to host the games behind Obama’s adopted hometown (in a stadium to be erected within walking distance of Obama’s Hyde Park home), that Barack will now use his influence to twist the arms of the International Olympic Committee and make them realize that Chicago is a superior city to Madrid, Toyko or Rio de Janeiro – the other towns under consideration.

I think people are overestimating the aura of Obama. Yet the history of the IOC is one filled with many decisions that have little rationality behind them. Who’s to say Obama wouldn’t have an impact?

But this isn’t even the only Olympics issue that Obama allegedly will affect.

There are people in this country who believe that the presence of a President Obama will also persuade IOC officials to reinstate baseball and softball as Olympic sports.

BOTH OF THOSE games were played possibly for the last time at the Olympic Games this summer in Beijing. They were dropped from the 2012 Olympics to be held in London – on the grounds that there isn’t enough international interest in either sport.

Yet the Canadian Press reported Thursday how Major League Baseball officials who would like to see baseball reinstated are looking favorably upon Obama to boost the international perception of the United States, which they think was the real reason baseball was dropped.

How better to punish the United States than to say nobody cares about its “National Pastime?”

Yet among people connected to the business of Major League Baseball, Obama’s election is not seen as a complete positive.

MANY OF THOSE high-salaried athletes were more than inclined to buy into Obama opponent John McCain’s rhetoric that Barack would “spread the wealth,” including that of star ballplayers who think that a .280 batting average or a 3.90 earned run average completely justifies $10 million per year – guaranteed for six seasons. And if they actually do excel, then one had better roll out the fleet of Brinks’ trucks to handle their cash.

Some agents look at Obama’s promises to boost the top federal income tax rate from 35 percent to 39.6 percent, and react by thinking they have to negotiate new contracts for their clients that would focus on having as much of their income as possible paid under the old tax rate.

Scott Boras, the agent who represents many of the biggest bucks names in baseball, told the Associated Press how he may negotiate new contracts for his clients in upcoming weeks that seek significant signing bonuses to be paid out before the end of the year – just to get around paying the proposed new tax rate (which actually is a return to the rate that existed under President Bill Clinton).

Should we assume that Barack Obama is not the friend of the ballplayer?

IT WOULDN’T SHOCK me to learn that the few ballplayers who think at all about electoral politics lean Republican. Many of those social conservatives who tout “traditional” values tend to think of the local athletes as a favored part of the culture, which means many of these ballplayers were raised thinking of themselves as special.

Why should they be eager to dump on a group that looks favorably upon them?

Yet that doesn’t mean all baseball people are dreading an Obama presidency.

Take the Chicago White Sox, the team that has long been a part of the character of South Side Chicago and which Obama adopted as his favorite when he picked Hyde Park to be his home neighborhood some two decades ago.

THE CHICAGO TRIBUNE reported Thursday that the White Sox have already offered up an invitation to Obama to attend Opening Day 2009 – to be held April 6 against the Kansas City Royals.

That would give the White Sox a Presidential Opener, an annual tradition that would be a publicity coup for the White Sox – and Chicago baseball in general. The closest this city has ever come to a presidential opener was 1994 when then-first lady Hillary Clinton tossed out the first pitch (and got a sloppy kiss from broadcaster Harry Caray to start the Chicago Cubs’ season).

Could Barack Obama’s presence be enough to get Major League Baseball to start off its season in 2009 on the South Side? Or would Obama get pressured to do his ceremonial honors at some other team’s Opening Day?

AND IF OBAMA did snub the White Sox, would their fans ever forgive him? Probably not?

Because when it comes to political vs. athletic allegiances, these sports people have their priorities – and it certainly isn’t in favor of the Leader of the Free World, no matter where he comes from.