That was the “vote” painted on the front window of a bakery in south suburban Homewood, a town I happened to pass through on mid-day Tuesday.

Nielsen’s Bakery is like a lot of other businesses, making an effort to sell its products with an Election Day theme. In the case of the bakery, it was cookies. They sold edibles touting both the presidential campaigns of Barack Obama and John McCain, and kept track of how many of each were sold in an attempt to come up with a “winner.” 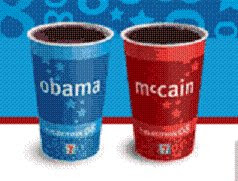 WHEN IT COMES to cookies, Barack beat McCain big time.

Now I’m not about to claim that cookie sales really mean much, no more so than all those 7-Eleven franchises that are selling drinks in special Obama and McCain cups (big surprise – in Chicago, Obama wins. In Arizona, it’s McCain).

But this neighborhood bakery is in an area that was once the heart of a strong Republican Party organization in the Chicago southern suburbs of Cook County. There was once a time when the idea of hinting that locals liked Democrats would have warranted a brick through the bakery’s window.

You want to know how Illinois went from being the ultimate bellwether state (siding with the winner in all but two of the presidential elections held in the 20th Century) to being such a hard-core Democratic state that the only reason any candidate pays attention to us is our proximity to Indiana?

IT IS THIS very suburban trend. The GOP that used to be seen as the mechanism by which suburbs were able to withstand the political might of Chicago Democrats is now the party that is so blatantly rural in its view of the world that those same suburbs now see they have more in common with Chicago than they do Cairo.

Hence, Obama’s campaign has been sending out e-mails to his Chicago-area supporters, asking if they could work phone banks to try to get the good people of Gary, East Chicago and Hammond to get off their Election Day duffs and vote.

And the closest Mayor Richard M. Daley came to appearing at a campaign rally is when he made a trip last week to Highland to speak to the Hoosier faithful to get them to want to back Barack. Gary Mayor Rudy Clay was on hand, which led to countless jokes about which one could provide the other with more examples of how to steal an election.

What other items were notable about activity taking place on Election Day?

EVERYBODY HAD AN “EXCLUSIVE” STORY: Insofar as I can tell, long-time Chicago newsperson Pam Zekman of WBBM-TV gets credit for “breaking” the story that some polling place workers were so lax about checking lists of early voters that those people could have voted again on Tuesday.

There were people in Chicago who showed up at their polling places, just to see if they would be given a second ballot to use. When they were, they high-tailed it for the telephones to call the local television stations.

I first heard the story reported by Zekman, only to see it reported about two minutes later on WTTW-TV’s “Chicago Tonight” program. For all I know, every other Chicago television station also had the story shortly after 7 p.m.

Not to trivialize the seriousness of the issue, but I have but one question. If those people who felt the need to check on their ballots had the time to wait in line at the polling place on Tuesday, why didn’t they wait until today to cast their ballot?

JACKING UP THE PRICE, VS. GIVING A DISCOUNT: Downtown Chicago business interests reacted in differing ways to the proximity of Obama’s Election Night rally being held in their proximity.

While some parking garages are taking advantage of the street parking bans for the day by jacking up their fees (as much as $50, depending on the garage’s proximity to Grant Park), the Chicago Tribune notes that theatergoers are getting a break on tickets, if they choose to attend tonight’s shows.

Tickets that can go for as much as $90 apiece are being sold today for $44.

So for those of you who are too cheap to pay the usual rates but still want to catch a theatrical experience (http://www.broadwayinchicago.com/specialoffers.php), this was your chance. Of course, parking your car near the theater meant you got caught in the higher-than-usual rates caused by Obama. So it all balances out in the end.

NOT MUCH CONCERN FOR CON-CON: When I was handed the card that I needed to insert into the touch-screen device so I could cast my ballot Tuesday, I was also handed a blue sheet of paper telling – both in English and en Español – the proper wording for the portion of the ballot related to whether or not to hold a Constitutional Convention.

Not that many people around me were too concerned about the issue. Most of the people I witnessed in my polling place (which doubles as a Lutheran church the rest of the year) barely glanced at the sheet.

The man ahead of me in line to get a ballot literally crumpled his up and tossed it into a trashcan before voting – without even reading it.

So how does this lack of concern about the issue play out? Did people vote out of ignorance, moving on to the issue (U.S. president) they really care about? In short, this portion of the ballot has the potential to have less thought put into it than all those judges.

DID THEY EXPECT THE ‘TERRORIST’ FIST JAB?: My chuckles for the day came from the various accounts being published about how University of Illinois at Chicago education professor (and onetime Weatherman activist) Bill Ayers was seen voting at the same polling place where Barack Obama cast his ballot earlier in the morning.

Do people seriously expect Ayers to go into seclusion, or to be denied his vote at his polling place at Shoesmith Elementary School in the Hyde Park neighborhood.

Or perhaps they seriously expected the two to schedule simultaneous appearances so they could (http://blogs.reuters.com/trail08/2008/11/04/obama-ayers-cast-ballots-in-same-polling-station/) give each other an Election Day dap?

The celebration for Barack Obama at Grant Park. Axelrod, one of the real stars behind the rise of Barack Obama, was sitting with political consultant colleagues awaiting the results coming in.
----------------------
Sally
Promoter