The government official Pat Quinn I know (as opposed to the former prosecutor and judge) was always an idealist. It was that idealism that has managed throughout the years to rub many political people the wrong way.

And it became clear Friday that the idealistic side of Quinn has not been erased by his dealings with Rod Blagojevich.

HOW ELSE SHOULD we interpret the new Illinois governor’s rhetoric about wanting to shift the primary election from February to September?

In Quinn’s wildest fantasies, the 2010 primary elections for state government office (including his bid to get a term of his own as Illinois governor) would take place in September, with the general election being held just two months later on its traditional Tuesday date in early November. 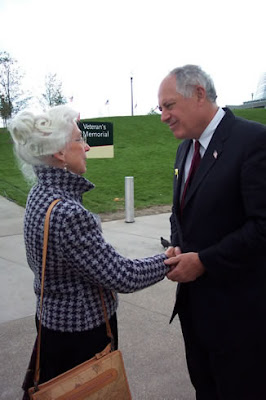 Gov. Pat Quinn has gone from greeting Gold Star mothers to trying to revamp the electoral calendar for Illinois in an attempt to reduce the need for campaign cash. Photograph provided by State of Illinois.

Quinn dreams that the public interest would benefit by slashing the general election season in Illinois from the nine months that it was in 2008 when Barack Obama ran against John McCain for president to just two months.

It would also result in less burnout amongst the Illinois electorate. Be honest, how many of you were so disgusted by the time October of 2008 came about that you were wishing for Election Day to come and go on Nov. 4 – just so that the whole process would be over and done with.

But excuse me for being skeptical. I’m not convinced that the few benefits that might be derived from a shorter general election season would outweigh the negative impact of stretching out the primary election season.

And let’s be honest. Shifting the general election would extend the primary election season by however long (seven months) a time-span the primary Election Day was moved.

I SUPPOSE PAT Quinn, in his dreams, thinks that the people who want to be governor will simply wait until early 2010 before they start doing anything toward campaigning for office.

But the reality of electoral politics in the early 21st Century is that the campaigns that have a financial edge are going to use it to try to bury their opponents as quickly as possible.

It already is a given that serious campaigning starts about one year before the actual date of the primary election. Mark my words that the campaign season for the 2010 election for Illinois governor and other statewide offices (along with the U.S. Senate seat now held by Roland Burris) will begin in February or March.

We’re going to start hearing in the upcoming month about all the exploratory committees being created so as to allow the political dreamers to do whatever studies they deem necessary to convince themselves that the people of Illinois desperately want them to be on a ballot come 2010.

BY MAY OR June, we will have candidates formally declaring their interest in specific offices, and assorted campaign stunts taking place so as to draw public attention.

The idea of getting starting in the next few weeks for a February 2010 primary election is to build up a momentum that crushes political opposition.

There’s no way that the candidates are going to put off the beginning of their campaign activity, just because of the off-chance that the General Assembly might actually go along with Pat Quinn’s pipe dream of a September primary – instead of a February election date.

So if Quinn were to get his way, instead of a year-long primary campaign season, we’d have a year-and-a-half-long time span for the political geeks of Illinois to say something stupid in their attempt to get your vote.

TO ME, THE idea of a two-month general election season (which really is kind of short) may be a noble goal. But it is outweighed by the concept of an 18-month primary.

I’m willing to give Quinn the benefit of the doubt that he’s being naïve in not understanding that reality. For otherwise, the alternative is to consider that this move is purely political on Quinn’s part.

The financial reality is that the Democratic dreamers for governor, senator or other top-ranking office all have significantly more money than the Republican frontrunners for those same posts – except for Quinn.

The most recent disclosure statements filed with the Illinois State Board of Elections indicated that many Democrats started 2009 with campaign funds in the millions of dollars (with Illinois Attorney General, and possible gubernatorial candidate, Lisa Madigan being the wealthiest with about $3.6 million in her fund).

QUINN, BY COMPARISON, had just under $90,000, which is a pitiful sum for a legitimate statewide contender to have. With that little cash on hand, he might as well be an Illinois Republican.

I can’t help but think that Quinn’s desire to undercut the influence of campaign cash on a primary season is motivated at least in part out of the reality that he doesn’t have any.

EDITOR’S NOTES: Pat Quinn the governor is likely to propose a lot of “good government” ideals, but (http://newsblogs.chicagotribune.com/clout_st/2009/01/quinn-wants-primary-pushed-back-to-september.html) that doesn’t make them all practical.

Not many government officials enter a new post thinking of themselves as exterminators who need (http://edition.cnn.com/2009/POLITICS/01/30/illinois.governor.quinn/) to “fumigate” their new employer.

Just in case you thought I was kidding about there being (http://www.state.il.us/court/AppellateCourt/Judges/Bio_Quinn.asp) another Pat Quinn.
Posted by Gregory Tejeda at 12:01 AM