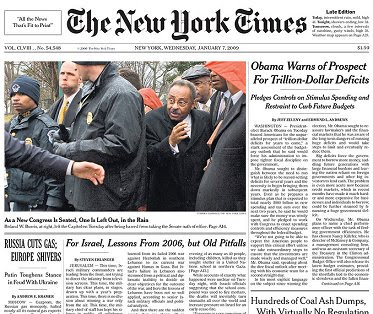 When was the last time Roland Burris made Page One, above the fold, of the New York Times?

That is my prediction for how the whole fiasco surrounding Illinois’ second seat in the U.S. Senate will be resolved, now that Roland Burris and Harry Reid have had their sit-down.

For those of you who care (and a recent Gallup Organization survey indicates 59 percent of the American population is following the Burris mess), you know by now that the Senate majority leader from Nevada said earlier Wednesday he would be willing to support Burris in the Senate if the one-time Illinois attorney general can get Secretary of State Jesse White to affix the state seal to the gubernatorial proclamation that makes Burris the man who gets to finish off Barack Obama’s two remaining years in the Senate.

YOU LIKELY ALSO have heard that White is upset that his actions are being portrayed as interfering with the Senate.

So it is likely that White is looking for an excuse to get that gubernatorial proclamation back so he can have his staff affix the seal. That would then allow Burris his time in the Senate.

My guess (and this is purely a guess) is that some court will rule favorably on Burris’ legal actions, and White will use that as the “face-saving” act allowing him to certify the Blagojevich paperwork naming Burris to the Senate. It could happen by mid-week of next week, which would put the issue to rest before the inauguration on Jan. 20.

Many political pundits have made much of the thought that Burris will have to promise not to seek election to his own six-year term come the 2010 elections in Illinois. I would be surprised if Burris gets the Democratic nomination for the Senate seat.

YET I ALSO won’t be surprised if this becomes one of those unspoken deals. Burris may have to eat dirt, so to speak, by accepting that he only gets one-third of a U.S. Senate term. But he’s likely never going to have to come out and say anything in advance.

His inability to get his own Senate term will be staged in such a way that Burris will get to blame it on his age (or perhaps say that spouse Burlean wants him back in Chicago in their golden years).

Then we will get the chance to see Lisa Madigan or Jan Schakowsky or Jesse Jackson Jr. or Tammy Duckworth (or anyone else with enough ego to think they’re worthy of the U.S. Senate) fight it out amongst themselves to see who gets the Democratic party nomination (and will have to deal with the millstone of the name “Blagojevich” dangling from their neck).

By that point, Blagojevich will be gone.

I EXPECT THE Illinois Legislature will now put the rush on political maneuvers to impeach him, then try and convict him so he can be removed from office. The fact that Blagojevich so clearly has “won” the political fight over the Senate seat will intensify the disgust with which many legislators regard him.

So when he’s out of office, and possibly serving time as an inmate at the federal correctional center near Oxford, Wis., there will be the perception that Blagojevich won the fight but “lost” the war.

But this could literally turn into one of those circumstances in which history will be the final judge. Because I can’t help but wonder if the General Assembly’s handling of impeachment and the whole Senate replacement process was so poor that they will become the ones who look like nitwits some 50 or so years from now.

A conservative-oriented legal group filed a lawsuit to force the acceptance of Burris as a (http://www.cbsnews.com/blogs/2009/01/07/politics/politicalhotsheet/entry4705004.shtml) member of the Senate, likely so they can try to use him as the butt of negative campaigning come 2010. That presumes the Illinois GOP won’t nominate someone so incompetent himself that Burris (or any other Democrat) looks superior by comparison.
Posted by Gregory Tejeda at 3:49 PM