removal from office for Rod Blagojevich, or I just have too peachy an outlook on life these days.

For while Friday will go in the history books as the day that Illinois’ governor was impeached (setting up the prospect of a trial in the Illinois Senate to determine if he should be removed from office), it was not a totally negative day for Gov. Milorod.

IT WAS THE day that the Illinois Supreme Court handed down a ruling that helps Blagojevich in getting his way with regards to his appointment of a new official in the U.S. Senate. And it was also the day that someone, ANYone was willing to go on the record in support of the governor.

Milton Patterson, who has been in the Illinois House of Representatives since 2005, turned out to be the guy who made my Friday morning prediction incorrect.

Instead of a 118-0 vote (or any kind of unanimous vote), Patterson became the lone politico who voted against impeachment.

The final vote was 114-1, with one other representative, Elga Jeffries, voting “present.”

NOW I DON’T know much about Patterson. He arrived on the Statehouse Scene after I left it as a 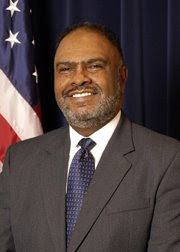 regularly assigned reporter. In fact, he hasn’t put together much of a record in the Legislature.

A search of the “Wikipedia” website on Friday offers up the briefest of biographies on Patterson, listing the committees upon which he serves in Springfield, along with an update added Friday afternoon informing readers of Patterson’s role that morning in the Blagojevich impeachment.

Which means that regardless of anything else Patterson eventually accomplishes as a legislator, he’s likely always going to be remembered as Blagojevich’s lone supporter.

He’s going to be the guy who went with his “gut feeling” and decided to vote “no” on impeachment for Blagojevich because, as he told reporter-types at the Statehouse, “I have no firsthand knowledge of any of the evidence.”

NOW SOME PEOPLE are going to argue that he should have gone along with the report issued by the House impeachment committee, which spent the past few weeks hearing evidence and building a case against Blagojevich – one that received a 21-0 vote of support on Thursday.

Others are going to claim his “gut feeling” is a sign of his incompetence, as he is not capable of basing a vote on evidence presented to him.

But a part of me actually gains a bit of respect for Patterson, just because he did not want to be pressured into going along with the political equivalent of a “lynch mob.”

Instead of spewing rhetoric about “freak shows” (like long-time Blagojevich critic and state Rep. Jack Franks, D-Woodstock, did), he was willing to cast a vote that I’m sure he realizes will gain him a certain level of political infamy.

IT CERTAINLY IS a bolder move than Jeffries’ “present” vote. I would have respected her more if she had “accidentally” missed the vote because she was in the rest room.

Patterson’s vote was not the only plus for Blagojevich. The Illinois Supreme Court gave political people the legal means by which Barack Obama can be replaced in the U.S. Senate, although Sen. Richard Durbin, D-Ill., on Friday said some senators want to play political hardball with the issue.

It had been expected that the Illinois high court would order Illinois Secretary of State Jesse White to certify the proclamation Blagojevich previously issued that made Roland Burris his choice to be Illinois’ junior senator.

Instead, the state’s high court ruled that the proclamation is legitimate even without having the state seal applied (which is a gesture that the document in question is a legitimate government document, and not counterfeit).

SO NOW, WHITE did not have to do anything that would appear to be making him back down from his previously issued stance. But he wound up giving in late Friday, and signing the Blagojevich document.

In theory, Senate Majority Leader Harry Reid, D-Nev., and other Senate Democrats who previously said they wanted nothing to do with any lawmaker picked by Blagojevich could back off by claiming Burris has legitimate credentials to be in the U.S. Senate. But Durbin said some political people now want to wait for the Illinois Senate to act, regardless of how long it takes and how long the seat from Illinois remains open.

Blagojevich will be able to say his pick for the Senate should get the post, and that it is Washington bureaucrats who are interfering with Illinois. I’m sure that in Blagojevich’s mind, that fact will be the one he remembers about Friday. “Impeachment” action will sink to the back of his mind.

SO WHERE DO we go from here?

Next week will be another set of dueling images. Burris fighting for a U.S. Senate seat will take up some public attention, as any attempt to deny him the seat will wind up with Reid taking all the blame.

But the Illinois Senate is likely to begin its share of the impeachment proceedings during that same week. They will have to decide whether Blagojevich’s behavior during his six years as governor amounts to an “injustice” (which is the only legal standard written into the Illinois Constitution with regards to impeachment).

For his part, Blagojevich says he expects there to be more support in the state Senate than there was in the Illinois House. But there are going to have to be a slew of Milt Pattersons on hand for the Senate to fail to come up with the two-thirds support that would avert the Pat Quinn prediction of Blagojevich being removed from office prior to next month’s bicentennial of Abraham Lincoln’s birth.

Thirty-nine of the 59 members of the Illinois Senate will have to vote “yes” for Rod Blagojevich (http://www.msnbc.msn.com/id/28582066/) to be “convicted” of political offenses worthy of his removal from office. That is separate from a criminal conviction in U.S. District Court, which will occur in a couple of years.

Blagojevich has made himself the central focus for people paying attention (http://www.csmonitor.com/2009/0109/p25s33-usgn.html) to Illinois political (http://dallasmorningviewsblog.dallasnews.com/archives/2009/01/gov-rod-blagoje.html) issues.
Posted by Gregory Tejeda at 12:01 AM