It’s Impeachment Day in Illinois! Will this date someday live in infamy?

Friday, Jan. 9, 2009 – a date that will live in Illinois history. This (with apologies to the rhetorical skills of Franklin D. Roosevelt) is likely the date that will see the first impeachment ever of an Illinois governor.

In fact, there’s really only one question I have about the activity that will take place today in the Illinois House of Representatives. Will any of the 118 members be willing to vote “no” on the question of impeachment?

FOR THAT MATTER, will anyone have any hesitancy that would cause them to vote “present” or to somehow forget to push the right button when the vote is cast?

My point is to say I expect this to be a 118-0 vote in favor of impeachment.

Unlike most cases where the “I” word is dragged out to torment a political chief executive Rod Blagojevich does not have solid support from his own political party. 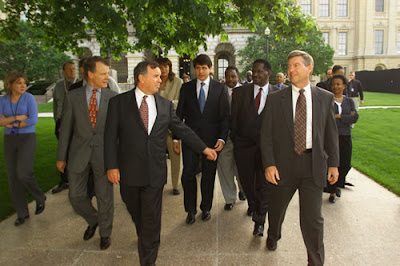 Is the impeachment of Rod Blagojevich really about the governor's improper behavior? Or is it the fact that followers of Mike Madigan and Richard M. Daley would prefer to have Rod out of their way? Photograph provided by State of Illinois.

In fact, this is a case where Democrats themselves are the ones who are leading the drive to boot Blagojevich from office. If this were primarily a Republican effort, it would go nowhere because the Illinois GOP has devolved these days into an insignificant political entity.

HOW SEVERE IS the opposition to Blagojevich? Any thought in my mind that a representative or two might be willing to show some sympathy to the governor went out the window when I read the St. Louis Post-Dispatch account of how state Rep. Jay Hoffman, D-Collinsville, said he plans to vote “yes” for impeachment.

Hoffman was only a Blagojevich roommate back when the two were members of the Illinois House back in the mid-1990s, and Hoffman remained a gubernatorial pal who often was the one Rod could turn to in getting a sense of how harsh House Speaker Michael Madigan, D-Chicago, would deal with his various proposals.

Yet Hoffman told the St. Louis newspaper that he thinks the legal battles Blagojevich will confront in the next couple of years, dealing with his likely indictment in March or April and fighting off government corruption charges will be just too much for him to be able to govern effectively.

And as for many of the rest of the Illinois House members, Friday is going to be the day that they gleefully spew all the venom that has built up throughout the years in their dealings with the governor.

THEIR SENSE OF vengeance will be made worse for Blagojevich because of the perception that he “beat” them on the issue of picking a replacement U.S. senator to finish the two years remaining on the term of Barack Obama.

So Friday will get ugly.

In fact, I expect the debate by House members on the impeachment panel’s recommendations (approved Thursday) to be lengthy and redundant.

In all likelihood, only about two or three of the legislators will have anything truly unique or interesting or humorous to say. But this is going to be a case where all 118 members are going to want to have their say.

AFTER ALL, EVERYBODY is going to want to get in on the act of claiming they were always opposed to Blagojevich, and that they personally are all in favor of his punishment.

What they desperately want is to avoid being included in some future piece such as a Chicago Tribune editorial from a few days ago. Headlined “The Blagojevich 26,” it singled out several Illinois Senate Democrats who were supportive of Blagojevich in the past, and labeled them, “the governor’s enablers.”

So what are my thoughts in these hours before Rod Blagojevich officially becomes Illinois’ first impeached governor?

So as we hear all these “sordid” tales of trivialities that pass as “injustices” for which Rod Blagojevich ought to be impeached, one ought to keep in mind that it’s the same old nonsense that we’ve been hearing for the past few years.

The real “crimes” that Blagojevich is alleged to have committed while in office (and I never realized that trying to intimidate a newsgathering organization qualified as a crime, that makes me a victim so many times over) are not the issues at stake in this “impeachment” resolution.

This is all about the fact that the Republicans who still have not gotten over the fact that the GOP no longer controls the post of Illinois governor (Blagojevich’s first victory ended a 26-year GOP streak) and the Democrats who don’t want their particular leader (Mike Madigan, Richard M. Daley, Barack Obama, Richard Durbin, John Cullerton, etc.) to have to share influence with Blagojevich will finally band together to take a shot at Rod.

BLAGOJEVICH MAY VERY well be a nitwit in terms of his style of governing, which often includes rubbing his authority in the face of people who ought to be his allies. But I can’t help but think that the Legislature is on the verge of embarrassing itself with the way it is handling this whole fiasco.

So when they vote to impeach (and also to include a measure forbidding Blagojevich from ever running for ANY public office in the future), we ought to be careful in cheering on the Illinois House.

And we ought to be equally as skeptical when the Illinois Senate convenes later this month to engage in a “trial” whose result could be the removal of Blagojevich from office.

It’s not really a trial, even though Illinois Supreme Court Chief Justice Thomas Fitzgerald (himself a Chicago native whom I remember from his days as Cook County Criminal Court presiding judge when I covered that courthouse at 26th and California for the now-defunct City News Bureau of Chicago) will preside over the affair.

THE SENATORS THEMSELVES will be the jury. If Emil Jones were still Senate president, I’d be convinced of Blagojevich’s acquittal. Now, I expect many senators will fall in line to vote “yes” for removal from office out of fear that political partisans will picket their offices if they don’t blindly vote against Blagojevich.

All I know is that these legislative types had better hope the criminal case against Blagojevich is truly as solid as U.S. Attorney Patrick Fitzgerald implied it was when he announced the criminal complaint last month.

For wouldn’t it be the ultimate in absurdity (even by Illinois standards) if Blagojevich were to be impeached, removed from office, then ultimately acquitted?

EDITOR’S NOTES: Even his friends are reluctant to come out in support of Rod Blagojevich (http://www.stltoday.com/blogzone/political-fix/political-fix/2009/01/ill-rep-hoffman-top-blago-ally-will-vote-to-impeach/) when the impeachment resolution comes up for a vote on Friday.

“What if Blagojevich is Not Guilty?” sounds like a heretical thought to many Illinoisans these (http://legalinsurrection.blogspot.com/2009/01/what-if-blagojevich-is-not-guilty.html) days. But it is a thought that has popped into my head many times in recent weeks.
Posted by Gregory Tejeda at 12:01 AM