By looking ahead 50 years from now, Blagojevich is trying to craft a “legacy”

On a certain level, Rod Blagojevich is accepting of the idea that he’s not going to be governor of Illinois for much longer.

In fact, if one accepts the idea that all Blagojevich is trying to do is shape things so that a future generation will view him favorably, then all of his so-called erratic behavior of recent weeks and days makes all the sense in the world.

MONDAY IS THE day that the Illinois Senate plans to begin its “trial” of Milorod R. Blagojevich on ground that much of his behavior during his six years as Illinois government’s chief executive is unbecoming a governor.

It also is the day that Blagojevich himself plans to be nowhere near the Statehouse in Springpatch. He’s going to be in New Yawk City to make appearances on national television programs such as “Good Morning America” and “The View,” and also plans to put himself before the biggest marshmallow interviewer of the so-called Mainstream Media – Larry King of CNN.

Many people have chuckled quite a bit in recent days over the fact that Blagojevich has hired a public relations firm based in Tampa to coordinate such appearances and other stunts designed to make Milorod appear to be a sympathetic figure – rather than the irrational kook that his Illinois critics prefer to portray him as. 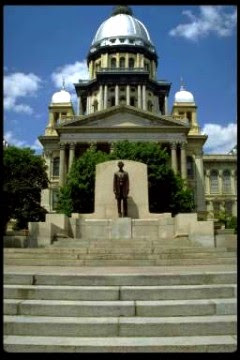 In all likelihood, Rod Blagojevich has about one more week to say he chooses not to work out of this building. Photograph provided by State of Illinois.

It is the same firm that has tried to make former Bolingbrook Police Sgt. Drew Petersen look like a respectable man (rather than a cradle-robber who whacks his wives when they reach the grand old age of 22).

PERHAPS BLAGOJEVICH LOOKS at the fact that Petersen has been under suspicion in the disappearance of his most recent wife for more than a year, but has yet to be hit with criminal charges. Perhaps he thinks the PR stunts have something to do with the quality of police work that can’t seem to nail down this case – one way or another.

Perhaps Blagojevich believes that the PR firm from the land of the Tampa Bay Rays can keep anything bad from happening to him.

The Illinois Senate’s members are either inclined to satisfy old grudges against Blagojevich, or are too intimidated by the public mood toward our governor to do anything except vote in a way that favors removing Milorod from office.

ON ACCOUNT OF the fact that Blagojevich’s highly-skilled attorneys have backed off the case (in large part because he was ignoring their advice on how to proceed) and that Blagojevich himself says he has no intention of showing up for the state Senate proceedings, the “trial” is going to be a formality.

The Senate won’t have to do much of anything besides hear the formalities that we observers already heard from the Illinois House of Representatives when they voted to impeach the governor.

Without anything resembling a defense (although the state Senate’s rules were so restrictive that Blagojevich wouldn’t have been allowed to put up much of a defense even if he did show up), the proceedings will be quick.

There are some legal observers who believe that the “trial” to be presided over by Illinois Supreme Court Chief Justice Thomas Fitzpatrick (who was once presiding judge of the Cook County Criminal Courts back in the days when Blagojevich himself was an assistant state’s attorney) could be complete by Friday.

Blagojevich’s time in office could be over by week’s end, which makes it a good thing that the governor never moved into the Executive Mansion. There’s no need to go to the expense of moving him out.

By the time people party this coming weekend, it is possible that we will have Illinois. Gov. Pat Quinn, who will be the guy who gets stuck trying to dig Illinois government out of the financial morass it currently sits in – made worse by the partisan wrangling between Blagojevich AND the General Assembly (which prefers to place all blame on Blagojevich) during the past two years.

But like I said earlier in this commentary, I think Blagojevich accepts the reality of all of this – even though all he does in public is quote English poets in a way that tries to make himself look intellectual, instead of the Elvis-lovin’ fool that he is.

THAT IS WHAT all the cowboy rhetoric about being hanged without a trial is about. That is what mentioning himself in conjunction with Martin Luther King Jr., Nelson Mandela and Mohandas Gandhi is all about.

That is what the national television appearances are meant to do.

He wants to plant the thought in the minds of the public that he is being persecuted. Bringing up the claim that the Legislature will immediately get new Gov. Quinn to approve a tax increase falls into that viewpoint.

If he can try to make people think that his persecution causes them to suffer too, then he may get some sympathy when the moment inevitably comes that he is removed from office.

IT IS NOT like the national media outlets he chose are the hardest-hitting. They are the ones most likely to catch people who pay little attention to the intricacies of Illinois government.

Who seriously believes the women of “The View” are going to nail Blagojevich on anything? I still remember the one time I actually watched that program. The three blondes who had their own E! cable network show about living at the Playboy Mansion with Hugh Hefner were the guests.

The show’s hosts tried asking questions about how ludicrous it was to think that Hefner could have serious relations with women five decades younger than himself, but wound up bursting out into giggles at their own questions.

Why do I suspect Blagojevich and first lady Patti (who also will do “The View” with her husband) will be able to charm the current crew into thinking he’s a nice guy, similar to how the would-be Bunnies wound up looking like they had intellectual heft?

WHY DO I think Blagojevich is going to spread a lot of charm Monday (even though some would prefer to describe it as doo) on national television?

And why do I think that Blagojevich’s only focus is trying to set up circumstances so that fifty or so years from now, some people will be inclined to remember him as the victim?

When a legacy is all he has left, it is inevitable that Blagojevich will do whatever he can to try to protect it.

As much as I believe the Barbara Walters of old could nail Blagojevich during an interview (http://abcnews.go.com/US/story?id=6719884), I suspect what is more likely to happen is that Rod and Patti will lay their charm on Whoopi and crew.
Posted by Gregory Tejeda at 12:01 AM

He got nailed on The View and Larry King. Walters prolly nailed him the most! He might as well have faced the State Senate instead.