A DAY IN THE LIFE (of Chicago): Cardinals’ win reminiscent of ‘47 champs 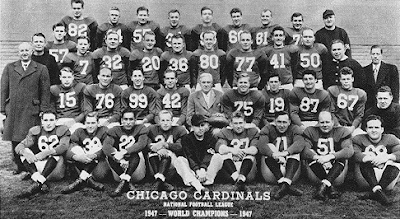 I can’t help but notice the rhetorical hype used in sports stories all weekend reporting the fact that that Arizona Cardinals football team managed Saturday to win their first home field “playoff” game since 1947.

What it really means is that the Cardinals have been so awful during their time in the greater Phoenix area that this is their first playoff victory at home ever. For that 1947 game constantly referred to wasn’t really a playoff game.

IT WAS A National Football League championship game when the Cardinals franchise (one of the oldest in the NFL) won its only league title ever. And those were back in the days when the White Sox weren’t the only team that “marketed” itself as representing Chicago’s South Side.

It was Dec. 28, 1947, when the Chicago Cardinals beat the Philadelphia Eagles 28-21, with Cardinals players wearing tennis shoes to help them cope with the frozen and tattered turf of Comiskey Park – the same site that now provides parking for White Sox fans attending games at U.S. Cellular Field.

I wonder at times if people remember that Chicago used to be a two-team town in the NFL, or if they think it is the natural order of things for us to get “stupid” for the Bears. The Cardinals were one of the league’s original teams and were in Chicago for four decades.

OF COURSE, DURING that time span, they only won that one championship in 1947. They’re the football equivalent of the St. Louis Browns, the major league baseball team whose only league title came in 1944 during the Second World War. Only the Cardinals never employed the equivalent of a dwarf or a one-armed outfielder, like the Browns did.

Compared to the nine championships the Chicago Bears took during those same years, it was no wonder that the Cardinals suffered from attendance deficits that caused their owners to eventually look to other cities – St. Louis, then the Phoenix area.

Not that the old owners ever gave up the team. The Bidwell family that continues to own Sportsmans’ Park ran the team back in that championship year of ’47, and still has the football team to this day, where it plays in a new stadium in Glendale, Ariz., the same city where the White Sox plan to shift their spring training operations for future years.

What else was noteworthy about the news in recent days?

WHO’S PLAYING WHAT GAME WITH RACE?: Is the U.S. Senate really in the hands of a man who thinks bla 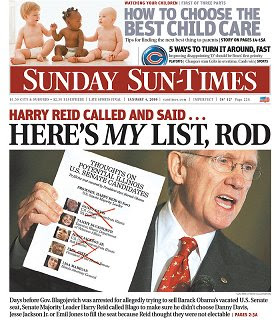 ck people are unelectable? That is the impression the Chicago Sun-Times tried to create with its Sunday paper editions illustrated with a doctored photograph of Senate Majority Leader Harry Reid, D-Nev., holding up a list of names, with those of black people crossed out.

Or is Gov. Rod Blagojevich giving reporter-types an overly selective interpretation of the conversations the two men had last week about what (if anything) Blagojevich should do to try to fill the Senate vacancy created by Barack Obama’s rise to president.

The odd part is that I have no problem believing both interpretations, even though Reid used a "Meet the Press" appearance Sunday to backpedal from such statements. It certainly wouldn’t be out of character for Blagojevich to twist the conversation the two had by telephone into a tall tale meant to make him appear sympathetic. Ever since the criminal complaint issued nearly a month ago, Rod needs all the “love” he can find.

Yet the fact that some would automatically look at a list of Illinois political people and presume the Anglos on the list are more appealing to the state’s electorate is not out of character. It is evidence that we as a society are not yet at the point where race ceases to be a factor – despite those who want to believe the election of Obama is the end of the civil rights battle.

REPLACING THE REPLACEMENT SYSTEM: Rep.-elect Debbie D. Halvorson, D-Ill., is leaving the Illinois Senate, and the local party bigwigs in the south suburbs down to Kankakee will gather Monday to pick her legislative replacement.

Among those in the running for the post in Springfield are Halvorson’s former chief of staff and a member of the Will County board. This replacement is about as close as we will come to filling any political vacancies these days.

We’re still waiting for dates to be scheduled for special elections to pick a replacement for Rep. Rahm Emanuel, D-Ill., who became President-elect Barack Obama’s chief of staff. Then, there’s always the need for a replacement for Obama himself in the U.S. Senate. According to Illinois law, the governor addresses those issues.

But Rod Blagojevich still has people worked up with his attempt to replace Obama, and I don’t know how would-be Sen. Roland Burris, D-Ill., will actually be received in Washington when he shows up this week. The only thing I know for sure is that the public will have another outcry of disgust if Blagojevich proceeds with his duties to schedule election dates. So we’re going to have quite a few vacancies in this state for some time.

“SOUTH SIDE” CELEBRATION FOR D.C. EVENT: The banquet hall that has been the site of many wedding receptions and other public events will be the site for celebration for those who want to bask in the glow of Barack Obama becoming president, yet are too cheap to travel to Washington for the inauguration.

Coordinators of the Jan. 20 evening event at the Alsip-based Condesa del Mar say they expect about 1,000 people to show up for their Chicago-area Inauguration Night party.

Don’t expect to be able to just wander in off the street. Tickets are being sold, with the cheapest “seats” going for $90. And for that price, there’s no guarantee that you’ll be able to see anything on the video screens being erected that are meant to give people a sense of what is happening in Washington while they’re partying (http://www.obamachicagoball.com/) in suburban Chicago.

And yes, there will be vendors peddling all the Obama-related merchandise one could want – for a fee.

Bring back the Cards to where they belong on the southside!!! So I can start hating the Bears, like my Grandfather did!