Blagojevich a “winner” in media war 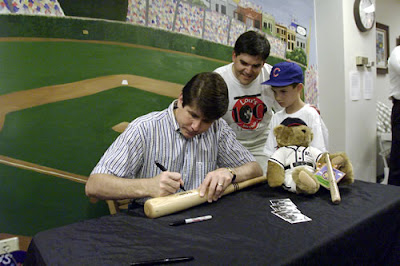 How much (or how little) will that Rod Blagojevich-autographed baseball bat be worth some day? Photograph provided by State of Illinois.

In one aspect, Rod Blagojevich is the winner in the political fight for his public life.

Blagojevich’s tour of the broadcast media outlets in New York with potential to give him national attention is making Rod himself the story for the week.

BY ALL RIGHTS, the attention of political geeks across the country ought to be on the Statehouse in Springpatch – where the Illinois Senate is preparing to boot Blagojevich from office.

Instead, the public is ignoring the Legislature and watching Rod, even though one can argue that Rod is the story because people are pondering whether or not his behavior qualifies him as insane, or merely delusional.

But regardless of what one thinks of Milorod, he is the focus of attention, not the political people who are doing the work of removing him from office.

Even on Tuesday when senators (along with Supreme Court Chief Judge Thomas Fitzgerald) heard tape recordings of Blagojevich talking about acts that could be perceived as a violation of his government duties, the attention of the world was focused on New York.

THE GUV DOES Rachel Maddow (as in the MSNBC program). He does both CNN and Fox News (where he appeared on a “radio” program that airs only on their website).

He faced so-called news people who were so enamored at being in the presence of a “political personality” that some Fox staffers literally asked to have their pictures taken with Rod (or so claims the governor’s public relations firm).

I’m willing to bet Rod enjoyed every minute. He definitely had a better time posing for those pictures than he would have had sitting in an Illinois Senate chamber listening to tape recordings that will eventually be used against him in a court of law.

Heck, even the one so-called legitimate news organization he appeared before (the Associated Press) can be viewed skeptically. Rather than talk to the Springfield- or Chicago-based reporters whom that wire service employs, he prefers to talk to some New Yorkers who probably think the end-all of politics was watching their state’s U.S. senator become Secretary of State.

THE GOVERNOR GETS to spew his rhetoric that is meant to create the image of a good, hard-working honest politico being tarred and feathered by his partisan enemies, and he does it before people who don’t know enough of the specifics to challenge his overstated allegations.

It is the reason why I wanted desperately to ignore the Blagojevich “world tour” taking place these days. I went out of my way to avoid the live interviews (either watching nothing, or popping a DVD into the player).

But Rod is everywhere these days. I didn’t watch “The View” on Monday. But that doesn’t mean I haven’t seen repeated showings of his moment on that program.

How many times can we see Joy Behar tousle Milorod’s hair while pleading with him to “do Nixon?” Does she really think she came off looking like anything other than a lightweight (and the governor like an intellectual, by comparison)?

IT DISMAYS ME to know that I was able to “call” accurately what his appearance on that program would be like (Barbara Walters trying to grill him, while the other ladies engage in fluff).

I don’t have to watch any of it. Literally, I don’t. The Tampa-based public relations firm that is representing Rod (and coordinating his New York media tour) has a site on Twitter that gives us those incredibly trivial 140-character spurts of infotainment (http://twitter.com/PublicityAgency) that try to make his every utterance seem like a major happening, in and of itself.

By comparison, what has the Illinois Senate done these days that can compete for attention?

For every person who comes off thinking Blagojevich is a flake (personally, I agree, but I don’t think he’s any more flaky than the bulk of the legislators themselves, it’s not like the Statehouse Scene is a gathering spot for intellectuals), someone else is bound to buy into Rod’s rhetoric that he is being picked on.

HOW ELSE SHOULD we interpret Rod’s comments from earlier this week that he still views federal prosecutors as the “good guys” and how he thinks he and they are on the same side?

I guess that means the big, bad General Assembly are the “bad guys” who are out to get him, supposedly so they can raise our taxes (as though likely future Gov. Pat Quinn would be a push-over on that issue).

So what should we think now?

Personally, I expect Quinn to be governor by this weekend, although a part of me wishes it were possible for the state Senate to vote to remove Blagojevich on Sunday so that Quinn could officially take office on that same day.

AFTER ALL, THOSE of us reporter-types who have dealt with Quinn’s history of staging events that promote his public causes and issues on the slowest news day of the week so as to boost the amount of media attention they receive would think it totally appropriate that Quinn should be active on a Sunday.

But then again, this Sunday is a “Super Bowl Sunday,” as we get to see if the Arizona Cardinals win their first championship since the days the team represented Chicago’s South Side.

And I could easily envision Blagojevich staging some sort of event that involved making an appearance at the game. That would be his ultimate farewell, trying to upstage sport and politics in one swoop.

EDITOR’S NOTES: What would you rather watch, Diane Sawyer (http://www.iht.com/articles/2009/01/27/america/27illinois.php) or the Illinois (http://www.suntimes.com/news/metro/blagojevich/1399413,w-impeach-blagojevich-trial-senate-012709.article) Senate?

These are the kind of people who can’t understand why Rod Blagojevich would prefer to be (http://www.chicagotribune.com/news/local/chi-blago-scene27jan27,0,1106155.story) in New York, rather than Springfield.
Posted by Gregory Tejeda at 12:01 AM