A lot of people want to believe that the political effort these days to keep Gov. Rod Blagojevich from naming Roland Burris as Illinois’ junior senator is some moral crusade consisti 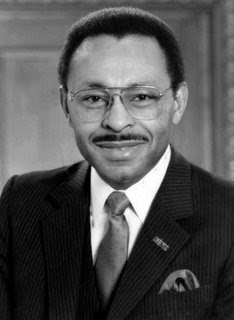 ng of righteous behavior against a tyrant who is deserving of every bad thing that happens to him.

I’m sorry, but that (to paraphrase first lady Patti Blagojevich on the state’s proposed Wrigley Field deal) is a bunch of “f*%#@ng s#!t.”

THERE IS VERY little about the political procedures taking place that is legitimate in the sense that it is based on well-tested legal procedures guaranteed to be upheld by a court in the future.

If Illinois political people are successful in their desire to keep Burris from Washington and boot Blagojevich from office (perhaps it’s a good thing he never moved into the Executive Mansion), it will be largely because they could, not because they were right.

Now this commentary is not necessarily meant to be a defense of Milorod or his behavior in office. It is meant more to clarify some misunderstandings many people seem to have about the process that is now taking place.

For example, there’s the fact that the Illinois secretary of state’s office has refused to certify the letter on official (and rather ornate) gubernatorial stationery that was meant to be would-be Sen. Burris’ credential to get into the U.S. Senate chambers when the newly elected body takes office in Washington on Tuesday.

AFTER PUBLICLY ANNOUNCING that he intends to make retired politico (and one-time Illinois attorney general) Burris a senator, Blagojevich went through the ritual of having one of his staffers take the official state document downstairs from his Thompson Center office on the building’s 16th floor down to the 12th floor – where Secretary of State Jesse White maintains his offices.

There, aides to White formally refused to accept the letter. Some people seem to think this means the Illinois secretary of state has the authority to veto gubernatorial appointments.

All that was involved with White’s action is that his staff controls the mechanism that applies the state seal (that tough lookin’ eagle that adorns the state flag) to all official documents.

IN SHORT, BLAGOJEVICH could write the letter confirming Burris’ appointment, but without a state seal, it would not be considered “official.” White, in applying the seal, is saying that the document is not a counterfeit. It really was written by the governor and implies the decision that the governor meant to make.

My point in stating this is to say that state law never meant to give Jesse White (or any secretary of state) oversight to who gets gubernatorial appointments.

So it would not be the greatest miscarriage of justice if the Supreme Court of Illinois were to rule that White overstepped his bounds by trying to interfere with Blagojevich’s appointment of Burris to fill the vacancy in the U.S. Senate created when Barack Obama became the first U.S. president from Chicago.

Am I saying Illinois’ high court ought to rule in Burris’ favor with regard to the legal action he filed with that court earlier this week? I’m not sure.

ALL I AM saying is that there could be legitimate legal grounds for Burris to stand upon. People should not let their personal animosity for Blagojevich make them think the lawsuit is nothing more than Burris having a legal temper tantrum.

Then, there’s the activity that likely will take place next week, when Burris arrives on Capitol Hill – only to learn that the sergeant-at-arms of the Senate and the Capitol Police have been instructed to physically bar him from the Senate chambers. The real question will be to determine how close will they let him get to those “hallowed” halls.

All of this will happen because Senate Majority Leader Harry Reid, D-Nev., has made it clear he will take whatever action he can to prevent anyone supported by Blagojevich from becoming the new junior senator from Illinois.

The Senate does have limited powers to refuse to seat someone in their ranks. But most of the past incidents where such authority has been used (not since 1946, and most were in the early 19th Century) was due to questions over whether the would-be senator had legitimately won his election to the Senate.

THE IDEA WAS that the Senate did not want to appear to be siding with one person when an election challenge was still pending.

But strictly speaking, Illinois law is clear about picking a replacement senator to finish off the remaining two years of Obama’s term. Blagojevich is the incumbent governor, and he has the legal authority to make the appointment.

He did so, and it is questionable that Reid or the rest of the Senate has any real power to refuse Burris. They may get someone to issue a legal opinion in their favor, but that doesn’t make it truly legitimate.

This is exactly why I always thought the political powers-that-be of Illinois should have put their full focus on determining how to replace Obama – rather than trying to figure out how to punish Blagojevich.

I HAVE RECEIVED my fair share of e-mails from people telling me I am being small-minded, and that there is no harm in Illinois going short-staffed in its Congressional representation for part of 2009.

I say there is, and the current circumstances are exactly why.

If the Illinois General Assembly had decided promptly to have a special election, or to require the Legislature to “advise and consent” on any Blagojevich appointment, or to require Blagojevich to turn over authority to someone else (most likely Lt. Gov. Patrick Quinn) to pick an Obama replacement, it would have eliminated the current circumstance.

Blagojevich would not be able to accurately claim that he has a legal responsibility to make the appointment (and could be impeached for refusing to do so).

WE, THE ELECTORATE of Illinois, would have a clue as to how an Obama replacement would be chosen (even if we didn’t know exactly who would get the appointment).

Instead, we have the current situation, where the lack of prompt action by the Legislature to figure out how to pick a senator may have given Blagojevich the technical grounds to proceed as he did. The real embarrassment to Illinois in all of this is that the uncertainty is the fault of the General Assembly – not Blagojevich.

Legislators who are obsessed with the “Impeach Blagojevich” theme need to realize that real punishment for Gov. Milorod will come from the U.S. District Court. It should have been the legislative responsibility to ensure that Blagojevich’s legal predicament did not interfere with the business of state government.

Instead, their behavior is ensuring that state government will be perpetually tied up in knots due to our goofball of a governor.

EDITOR’S NOTE: The head of the sergeant-at-arms who will be in charge of restricting Roland Burris’ entry into the Senate chambers (http://www.nwi.com/articles/2009/01/02/ap/headlines/d95f8nbo0.txt) is the same official who was director of the Illinois State Police back when Burris was attorney general.
Posted by Gregory Tejeda at 12:01 AM

You are well informed and you express yourself well. It's just that you are wrong.

As Attorney General, Roland Burris tried hard to have two men executed he knew to be innocent. Allowing himself to be used by a corrupt Governor is just another chance for Burris to sell his soul for higher office.

Didn't Roland Burris express support for AG Madigan's request to remove Gov. B from office b/c Blagojevich is mentally incapacitated?

What kinda person takes an appointment from someone he believes to be mentally incapacitated?

Technically, the law is on Blagojevich's side, but technically the U.S. Senate can stall the appointment while a committee considers the situation.

And once Blagojevich is removed from office, Gov. Quinn can appoint someone to be the junior U.S. Senator from Illinois.

Then, technically the U.S. Senate can choose which individual to recognize.

Is Burris getting screwed? Technically, yes, but Burris loves being on TV and radio. Roland Burris who started his career as the consummate loyal Democrat is not getting in touch with his inner oppressed Black Man.

You can be an oppressed Black Man while endorsing a large check for little work for the government, right?

Roland Burris, who started his career as the consummate loyal Democrat, is now getting in touch with his inner oppressed Black Man.